This is part three of Chrissy Wilmes' Chef's Choice profile of Chris Williams of Franco. Part one can be found here. Part two, a Q&A with Williams, is here.

When it comes to education, some chefs choose the formal route, attending culinary school and working externships, while others learn strictly by experience in the field. Chris Williams of Franco (1535 South Eighth Street; 314-436-2500) opted for both, utterly devouring techniques and information. An education at the Culinary Institute of America in New York, externships in New York and France, an experience cooking in the Galapagos Islands and training at several jobs where he was mentored by talented, creative chefs, Williams has become an innovative, detail-oriented culinary artist with a passion for perfection.

Williams' chicken roulade is a prime example of the various forms of training culminating in one dish. As Williams prepared the recipe for Gut Check, he explained the method he uses to create the perfect piece of chicken, sans bone, without so much as breaking the skin. He said he'd stood in awe when another chef shared the secret with him. He explained the importance of blanching asparagus (it's the only way to maintain that vibrant, "sexy green") and detailed the proper way to do so. Using secrets and tricks learned by experience interspersed with an overall accuracy in method that comes from CIA training, Williams is clearly out to make every dish a masterpiece.

In pot, sweat the peppers and onions in olive oil until soft, about ten minutes. Add garlic and continue to cook for five minutes.

Add white wine, red pepper flakes and bay leaf and slowly simmer for about ten minutes, until reduced by 1/3.

Add chicken stock and continue to simmer for about twenty minutes.

Add lemon juice and thyme and cook for five minutes. Adjust seasoning, then shock on ice to chill.

Toss cremini mushrooms in a light coating of olive oil and season with salt and pepper.

Roast mushrooms in a 350 degree oven for fifteen minutes. Remove from oven and allow to cool completely.

Bone chicken legs with a sharp knife, cutting around the knuckle of the drumstick and being sure to cut all the tendons and the skin, but not through the bone. Hold the thigh bone and hyperextend the knee to pop it free from the joint. Twist the drumstick and pull to remove.

Draw a knife along the thigh bone to expose it, and slowly peel the muscle from the bone. Using the tip of your knife, peel around the knee joint and remove the bone. Be sure to locate the pin bone in the drumstick and carefully remove. Repeat with remaining three chicken pieces.

Remove skin from two of the pieces. In a food processor, purée the skinless and boneless pieces until smooth, stopping frequently to scrape down the sides of the bowl.

Add roasted mushrooms and purée until smooth, again scraping down the sides.

With food processor running, add cream in a slow stream, then egg and truffle oil. Season with salt and pepper to taste.

Place mixture in a piping bag.

Trim the tip of the piping bag to form a 1/3-inch opening. Stuff the tip of the bag into one of the two remaining chicken pieces, starting from the thigh end. Pipe and fill the drumstick and continue piping along the opening from where the bone was in the thigh. Repeat with each leg.

Roll the legs closed, using the skin to enclose the puréed mix. Repeat with remaining leg/thigh.

Pack each portion individually in a vacuum-sealable bag.

In a 145- to 150-degree water bath, poach each roulade for 30 to 40 minutes, until the protein sets. Remove from the water bath and shock in an ice bath.

Note: All previous steps can be done up to three days in advance and reserved in the bags.

Remove chicken roulades from bags and season with salt and pepper. Heat a pan over medium heat with two teaspoons olive oil and brown roulades on two sides.

Remove pan from oven and rest roulades on a plate covered with aluminum foil for five minutes. Slice and serve with sauce and vegetables.

In a pot just large enough for potatoes to be covered by 1 inch of water, bring potatoes to a simmer for three minutes. You want them to keep their shape but be just cooked through.

Drain and shock in an ice bath. Drain very well and pat dry with a towel.

Heat a sauté pan over medium high heat with three teaspoons oil. Add potatoes, cooking in batches, and lightly brown on the cut sides to heat through. Finish with a pinch of red pepper flakes and salt.

In a large pot of salted boiling water, blanch asparagus in batches and shock in ice water.

In a sauté pan, heat asparagus in small batches with 2 teaspoons water and 2 teaspoons oil.

Reduce the water so that the asparagus is shiny from the oil and finish with salt and pepper. 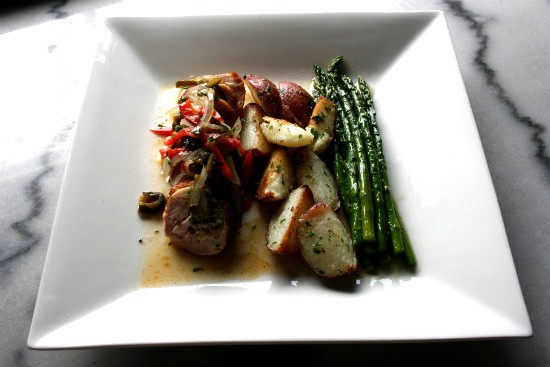