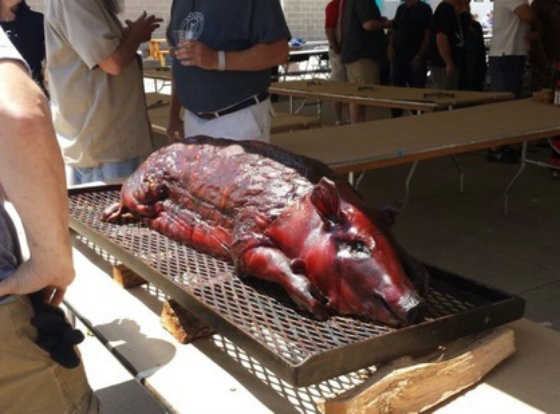 Under gorgeous skies, a throng of 400 people made their way to the third annual Pigs and Pints festival hosted by the Civil Life Brewing Co. (3714 Holt Avenue) on Sunday. The event, which began in 2012 to celebrate all things local, featured Red Wattle pigs sourced from Kluesner's Farm by Mac's Local Buys and prepared by the Block Restaurant and Mike Emerson from Pappy's Smokehouse.

The Civil Life also debuted its "Roggenbier," a German rye ale that will be a Block exclusive. It poured a cloudy brown color, and though there was no noticeable aroma, it did have a rich, malty flavor with a hint of rye spice and a sweet, dry finish.

The Scandaleros and FolknBluesGrass played live, and for the kids, the Civil Life invited a face painter and and balloon artist. Overall, it was a wonderfully civil way to enjoy a gorgeous day.