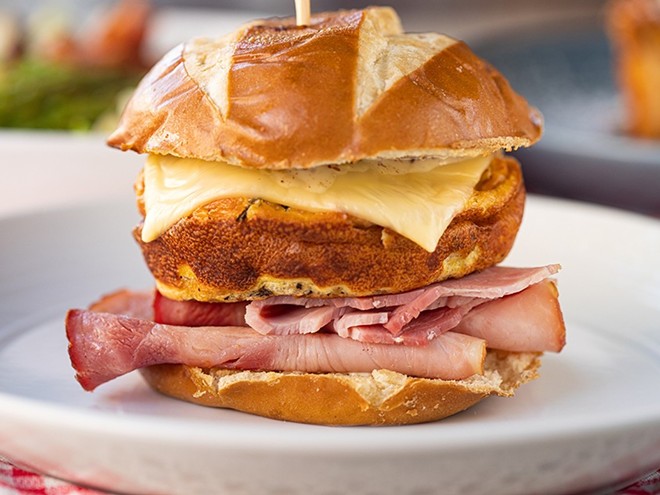 Mabel Suen
Fans of Clara B's will soon have a larger space in which to enjoy the restaurant's signature Clara Breakfast Sandwich.

First, the Clara B's food truck grew out of the commissary space, prompting owner Jodie Ferguson to open a brick and mortar in downtown Belleville. Now, the beloved daytime spot is yet again moving on to larger pastures, this time in partnership with a beloved local coffee brand.

In a Facebook post dated December 5, Ferguson announced that she has secured a new restaurant space for Clara B's Kitchen Table, less than a mile down the road from the current Belleville storefront. The new digs will not only represent a larger real estate footprint for the restaurant; it is also the beginning of a new partnership between Clara B's and LongStory Coffee, a Belleville small batch, artisanal coffee roaster founded by former Schlafly brewer Erik Busch.

"Erik had called me back in the day and said that he really wanted a restaurant like Clara B's in there when he first decided he was going to open his cafe," Ferguson says. "He thought there was no way, but now we are going to be set up where we provide the food and he provides the coffee."

Ferguson knew that Clara B's would have to expand almost the moment she welcomed in her first guests. As she explains, she originally signed the lease on the downtown Belleville space thinking that she would do mostly carryout business. However, it quickly became apparent that her customers wanted a dine-in experience, forcing her to dedicate more of her precious real estate to a dining room. That, coupled with increased demand for catering and special orders, made space a tight constraint.

"Everything started blowing up, and we didn't have the space for our stuff, let alone the food truck and anything else that came along," Ferguson says. "We recognized right away that we needed something bigger and thought about building out this space, but it was too expensive for a building I do not own."

The mutually beneficial arrangement with LongStory solves those problems for Ferguson. For starters, the kitchen will be roughly double the size of her original location, and it will be outfitted with additional equipment that will allow her to increase capacity. She is looking into buying a walk-in cooler — something that's been a dream of hers since she started the food truck in 2020 — and she will have a full hood system, steam tables and heating implements that will transition her setup from something that feels like a catering operation into a bona fide restaurant.

The increased capacity means that Ferguson can expand the Clara B's menu. She notes that guests can expect the same favorites that they have come to know and love, but she will be adding some country-style favorites that have been on her mind for quite a while. Plus, those in-the-know can cheer the addition of one dish, in particular, that is sure to become her signature offering.

"Pancakes," Ferguson says with a laugh. "People have been on me to put these pancakes on the menu, and now that we have a griddle, I can do that."

Though she emphasizes she and Busch are at the mercy of inspections and suppliers, Ferguson hopes to open the new Clara B's sometime the week of January 23. The original location closed down when Ferguson's lease ended last month, so she is taking the not-so-downtime to put her full attention toward setting up the new place and putting together holiday orders — and reveling in what a phenomenon she has created.

"It just took off," Ferguson says. "On the one hand, I am so happy, but on the other, it's definitely taken on a life of its own. I just roll with it."