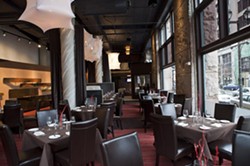 Laura Miller
The dining room of Prime 1000
Mosaic owner Claus Schmitz announced this weekend that he has sold his stake in Prime 1000, the upscale steakhouse that opened across the street from Mosaic in November of last year. Schmitz plans to focus on his Mosaic properties, which include not only the flagship on Washington Avenue but locations at the airport and, soon, in Des Peres.

A call to Prime 1000 reveals that Schmitz's original partner, Ed Curtis, is still invested in the steakhouse. The restaurant plans to announce details of its new partner very soon.