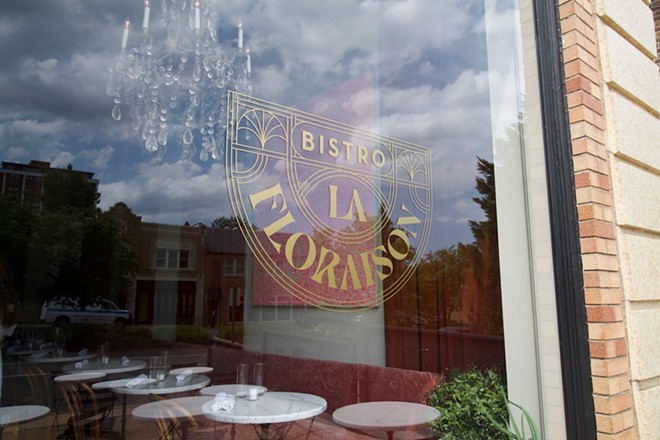 Oak furniture, marble tables and gilded candelabras fill the two rooms that make up Bistro La Floraison (7637 Wydown Blvd, 314-725-8880, bistrolafloraison.com). A velvet banquette lines one wall of one room, and a formidable, wooden wine cabinet brimming with glassware and porcelain occupies another. Lantern-like, wrought-iron chandeliers cast a warm glow that mingles with the natural light gushing in through the front windows. It all channels the upscale restaurants of antiquity.

Yet, above the ornate chandeliers, a charcoal-colored exposed pipe ceiling brings a distinctly modern feel to the space, supplemented by the globular quartz lamps hanging above the bar and the playful art dotting the walls.

This dueling yet complementary classic-meets-modern sensibility is at the heart of Bistro La Floraison, which celebrated its grand opening to the public last week.

Owned by Aaron Martinez and Tara and Michael Gallina of Take Root Hospitality, the space fills the hole left in the Clayton restaurant scene by the departure of beloved neighborhood eatery Bar Les Frères. Nearly two years after the pandemic forced St. Louis restaurateur Zoë Robinson to permanently close Bar Les Frères, the Gallinas (the minds behind Vicia, Winslow’s Table and Taqueria Morita) have continued its legacy with a swanky French bistro of their own.


“There's a lot of history to this space. People really loved having a French restaurant here, so it feels like the smart thing to do to continue that,” Tara Gallina says. “We just thought we needed more French restaurants in St. Louis.”

The restaurant aims to offer a “playfully innovative” take on classic French dishes, desserts and wines. Its take on gougères, for instance, sees the traditional puff-pastry appetizer paired with a creamy gruyere dipping sauce.

“You can dip it in, get messy, have fun and sort of enhance that cheesy factor, which is a little untraditional,” Gallina says. Other notable twists on French classics include fried chicken cordon bleu with smoked bacon and gruyere, Swiss chard and an Orléans mustard sauce; Parisian gnocchi with sweet corn, chanterelles, chives and demi sec tomatoes; and a caviar service complete with crispy potato waffles, chives, shallots, smoked créme fraîche and sieved eggs. 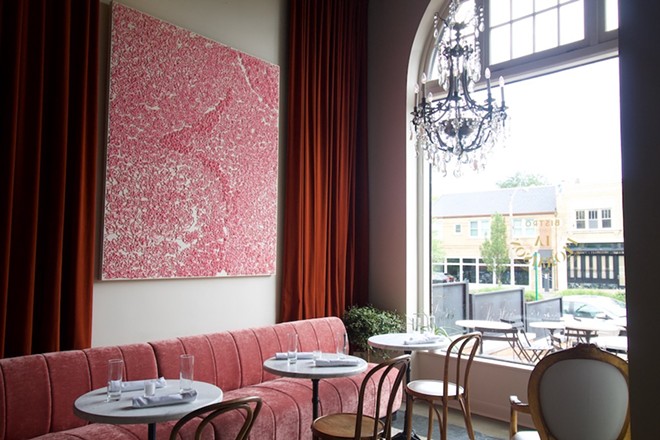 “Our hospitality group has a lot of spots that are unique in their own way, but there's something fun about playing to the classics,” Gallina says. “It's an opportunity for us to have fun with some really technique-driven food in a new environment.”

The Gallinas’ affinity for enhancing the classics doesn’t stop with the food. The pair had already determined to make their next venture French, and their predecessor’s rich French history only solidified their resolution.

The Gallinas have sprinkled familiar “easter eggs” throughout their establishment that vigilant frequenters of the former establishment may happily pick up on. The walls of Bar Les Freres were chartreuse and deep red. In homage to its predecessor, hints of sage green and pale burgundy decorate Bistro La Floraison. A pair of decorative antlers atop the bar of the Bistro allude to the mounted antlers that once covered the wall behind it. Even the initials of the two establishments are the same.

“We’re just trying to find some ways to pay our respects to what was here before,” Gallina says.

Above all, the Gallinas aim to make Bistro La Floraison a neighborhood restaurant, marking a departure from their previous ventures. While those establishments tend to alter their menus frequently, the Bistro will feature a set menu, save for changes to seasonal items.

Martinez and the Gallinas have worked hard to make this a place that not only welcomes but dazzles. The space includes seating for 40 guests indoors and 24 outside. A late-night snack menu and dessert menu for evening stragglers will be available from 9 p.m. until close — 10 p.m. weeknights and Sunday and 11 p.m. Friday and Saturday. Sommelier Patricia Wamhoff manages its robust wine program, and Patrick Fallwell serves as head chef.

The restaurant’s namesake, floraison, means “bloom” in French. Gallina chose this word because of its connections to agriculture and wine, both integral aspects of the Take Root Hospitality’s ethos. If the heart they have poured into this venture is any indication, though, “bloom” is exactly what Bistro La Floraison will do.

“I'm excited to know the neighbors, to get to know everybody who loved this place before, and hopefully, they will love what we're doing here,” Gallina says.

Kasey Noss is an editorial intern at the Riverfront Times. She attends Washington University in St. Louis and is majoring in English with a double-minor in Political Science and Italian.
More
Scroll to read more Food & Drink News articles (1)
Join the Riverfront Times Press Club