Hop on your brooms: The St. Louis shops are planning a celebration of the wizard for National Ice Cream Day 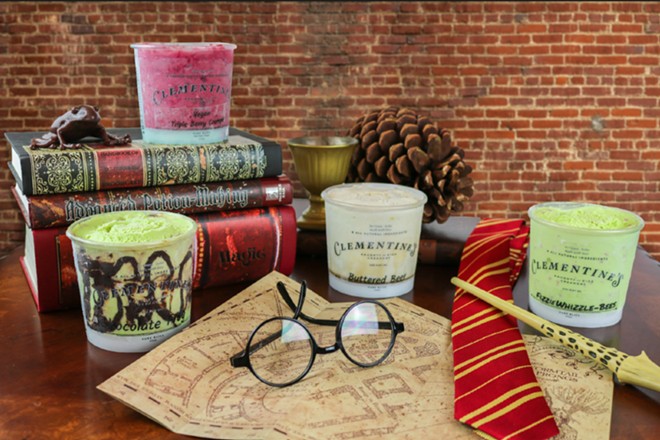 Courtesy Clementine's
Save yourself a trip to Diagon Alley and head to Clementine's.
We are pleased to inform the wizards and witches of the St. Louis area that they have a place at Clementine’s Naughty and Nice Creamery (Multiple locations including 4715 Macklind Avenue, 314-896-4500) for National Ice Cream Day on July 17. The creamery has launched its Wizard collection in celebration of the world-famous wizard’s birthday on July 31, and the popular series' 20th anniversary.

Flavors such as the Chocolate Frog — lime and coconut with a chocolate fudge swirl — or the Fizzie Whizzle Bees — vegan coconut with pineapple, orange blossom, lemon, sugar and natural vegan coconut butter-coated pink Poprocks — aim to make St. Louisans feel like they’re on the train to Hogwarts.

In order to properly celebrate the wizard in question, National Ice Cream Day and the new magical flavors, Clementine’s will host giveaways on July 17. The first 50 households in line at the locations will receive a free, limited edition Clementine’s T-shirt. Photo opportunities are available at the shops, and more giveaways are planned throughout the morning. Clementine’s will also have bottles of Flying Cauldron Butterscotch Beer to turn your ice cream into a float.

Courtesy Clementine's
The passport allows guests to enter to win a trip to Universal Studios.

Snag a Snitch button when you purchase a flavor while Clementine’s have some, and then hop on your Nimbus 2000 to tour the rest of the Clementine’s locations — guests can collect stamps at each shop and document them on a passport, "The Oracle," and enter to win a trip to Universal Studios.

The flavors can be purchased at any of the locations or online at ClementinesCreamery.com.