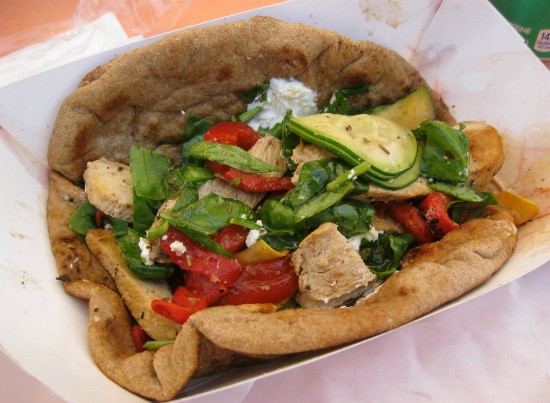 Club Med sounds like it could be the name of some swanky nightclub on Washington Avenue, but it's actually the moniker of a veggie-heavy flatbread sandwich from the now one-year-old Fozzie's Sandwich Emporium (1170 South Big Bend, Richmond Heights; 314-932-5414).

The Club Med is easy on the eyes and the stomach. A colorful assortment of grilled zucchini, squash, roasted red peppers and arugula make the Club Med look like a chopped veggie salad. The flavor from the veggies is given precedence in the Club Med, unlike other restaurant sandwiches where a watery slice of tomato and lettuce seem like an afterthought. The zucchini is thinly sliced, the shredded arugula gives a peppery punch, and the long strips of roasted red pepper lend a natural sweetness.

Creamy goat cheese makes its way into every bite and its mild flavor is lightened up by a heavy-handed drizzle of lemon-oregano vinaigrette. All rolled up with some marinated chicken breast cutlets in a grilled wheat flatbread, the Club Med offers a fresh, tangy alternative to traditional sandwich shop fare.