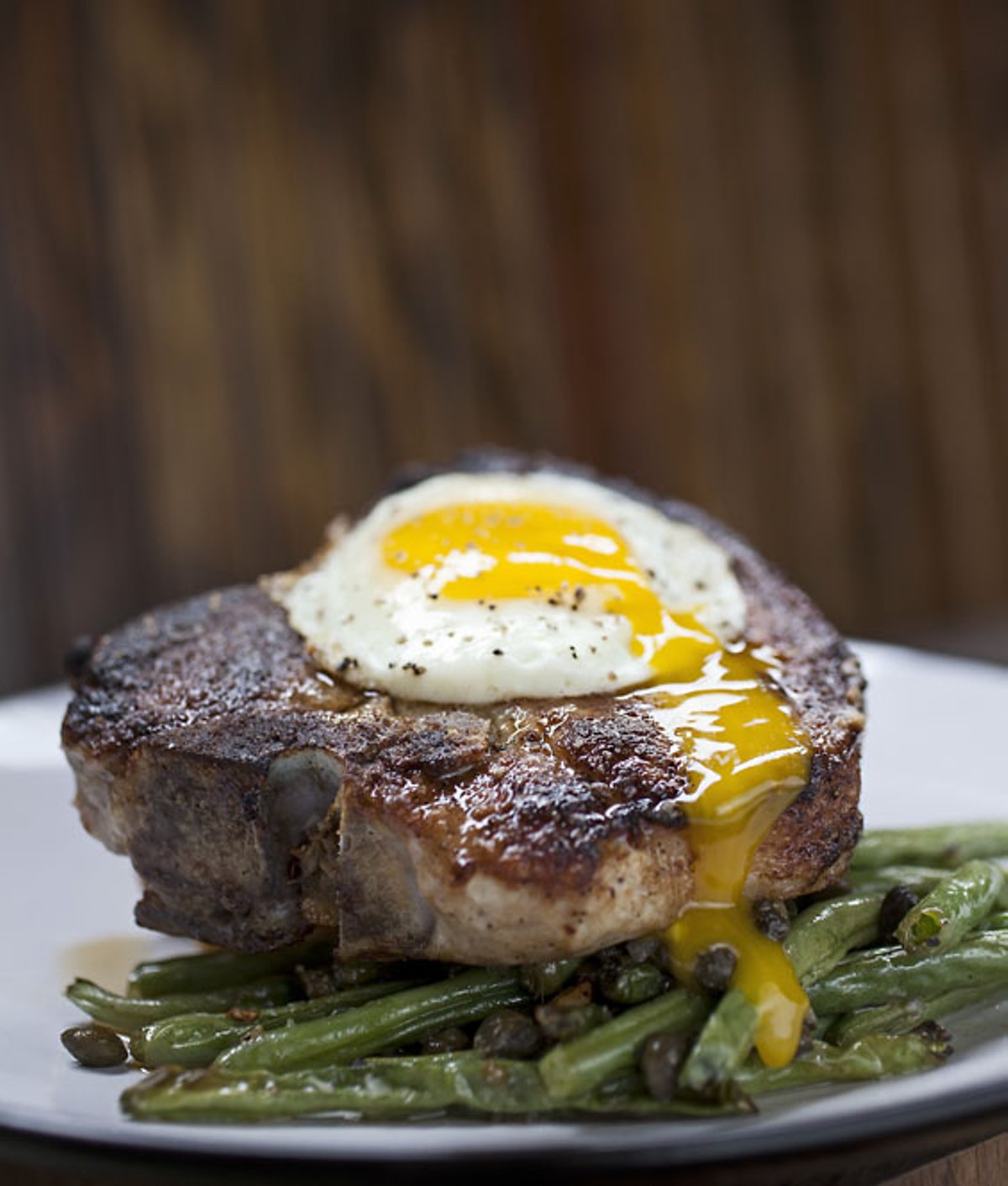 Cleveland-Heath takes its name from partners (in life as well as in business) Jennifer Cleveland and Eric Heath. The name is a rather audacious move on their part. Even diners who consider themselves informed on the local restaurant scene might ask, "Who?"

The answer should only raise your expectations regarding this outstanding three-month-old restaurant in downtown Edwardsville, Illinois.

Cleveland and Heath met while working at a Salt Lake City restaurant. The two then moved to California to attend the Culinary Institute of America's Napa Valley campus. While in school, each of them built an impressive résumé. Heath worked at Farmstead, a farm-to-table establishment. (The phrase "farm-to-table" has become trendy to the point of being meaningless, but Farmstead is the real deal: It keeps its own herd of grass-fed cattle.) Cleveland, meanwhile, learned from highly acclaimed chef Thomas Keller, spending a year and a half in the kitchen of his casual, family-style restaurant, ad hoc, and a year and a half in the front of the house at his renowned flagship, the French Laundry.

The couple's first restaurant represents a homecoming for Cleveland, who's a native of Bethalto, Illinois. It occupies the space on Edwardsville's main street previously occupied by Fond, and the layout remains essentially the same: an L-shaped space with a bar (an attractive, copper-topped model) that opens into two contiguous dining rooms. The color scheme is autumnal, warm reds and browns. The vibe is casual: Staff members wear plaid shirts and blue jeans; the speakers pump tastefully curated rock.

As Cleveland-Heath prepared to open this past fall, Cleveland stressed to me that the menu, too, would be casual: "For lack of a better word, it's comfort food — or 'favorite foods': chicken wings, burgers. We want to offer value and an attention to detail that you don't see in bar food."

She wasn't lying. The menu does, in fact, include a burger and wings. Yet to call this "elevated bar or comfort food" doesn't seem right. Even a simple starter like chips and salsa might prompt a raised eyebrow. The chips are made from flour tortillas rather than corn, and they're thick enough to retain a little chew to contrast their deep-fried crunch. The salsa is straightforward: earthy black beans tossed with lime juice, cilantro and red onion.

An order of "Cheddar Ham Sliders," another starter, brings three of the best biscuits you've ever had, rich but not greasy, a perfect balance of crumbly on the outside and moist inside. These are the "buns" for a sandwich of prosciutto (from Allan Benton's acclaimed Tennessee smokehouse) and a mildly tart and very lightly sweet cherry jam. Don't want the sliders? The biscuits by themselves are available as a side dish. A visit here without them is like Mass minus Communion.

The sliders would make a perfectly satisfying main course if you were so inclined, as would the shrimp and grits: wild-caught rock shrimp atop cheddar-chipotle polenta in a tomato-cilantro broth. The rock shrimp, though tiny, are plump and flavorful, but the polenta is the standout here, sharp, smoky and spicy, with a clean, bright edge from the broth — precisely conceived to balance the sweetness of the shrimp.

That the steak entrée is topped with butter spiked with bits of bacon should tell you all you need to know. The specific cut of steak varies depending on availability. The rib eye that I ordered was big enough for two to share and grilled to a gorgeous medium-rare. It comes with potatoes that have been roasted until tender and then deep-fried to a crisp and Brussels sprouts, also deep-fried and then seasoned with lemon and capers.

I like my steak medium-rare, but I didn't order it that way at Cleveland-Heath, because our server didn't ask. Same went for all the other meat dishes ordered over the course of my visits. As far as I'm concerned, the kitchen consistently nailed the ideal cooking time for flavor and texture. That said, it wouldn't hurt to have servers ask diners if the chef's preference is OK; meanwhile, those who skew toward one extreme or the other should consider themselves forewarned.

The lamb entrée brings two small, thick T-bone steaks (a cut that includes the tenderloin) topped with a verdant, biting chimichurri sauce that sharpens the meat's assertive flavor. The pork entrée too has a beef analogue: It's a pork chop "porterhouse," topped with a sunny-side-up egg and served over jalapeño-cheddar bread pudding. Of all the dishes I tried, this one was my favorite. The Berkshire pork, from Rensing's Pork and Beef in New Douglas, Illinois, was exceptionally flavorful and, cooked to a blushing-pink medium, very juicy. The texture of the bread pudding is reminiscent of fry bread, and like fry bread, it is sinfully luscious, in this case from the pork's juices. And a fried egg makes just about everything better.

"Lighter" main courses include a gnocchi "carbonara": potato gnocchi (not exactly light, but not dense either) in a cream reduction with peas, the nutty tang of Parmesan cheese and a backbeat of, yes, bacon. Besides the burger, other sandwich selections include a BLT and pulled pork. The latter is very good, the meat braised tender and topped with a spicy barbecue sauce and a slaw of cabbage and blue cheese.

Cleveland-Heath is the sort of restaurant where it's nearly impossible to save room for dessert, but you should try, especially if the cherry turnover is on the menu. Topped with vanilla ice cream, it's a simple, old-fashioned pleasure; pair it with a cup of coffee, and you'll have attained the platonic ideal of comfort food.

The wine list is modest in the best possible way: a small selection carefully thought out, drawing from all corners of the winemaking world with a minimum of ostentation. There are no beers on tap, but the beer list features mostly craft brews.

Service is among the best I've encountered in recent years, friendly and knowledgeable. Things can get a bit hectic when the restaurant is busy, but an apology accompanies any delay. Fair warning: The restaurant doesn't take reservations, so expect a wait during the prime dinner hours.

After multiple visits, I'm still not quite sure what to call the food at Cleveland-Heath to give it due credit. Upscale traditional American? Haute bar? Maybe it's best just to call it Cleveland-Heath. If nothing else, it'll help imprint Jennifer Cleveland and Eric Heath on your culinary consciousness; those are two names that I suspect we'll being hearing a lot in the years to come.