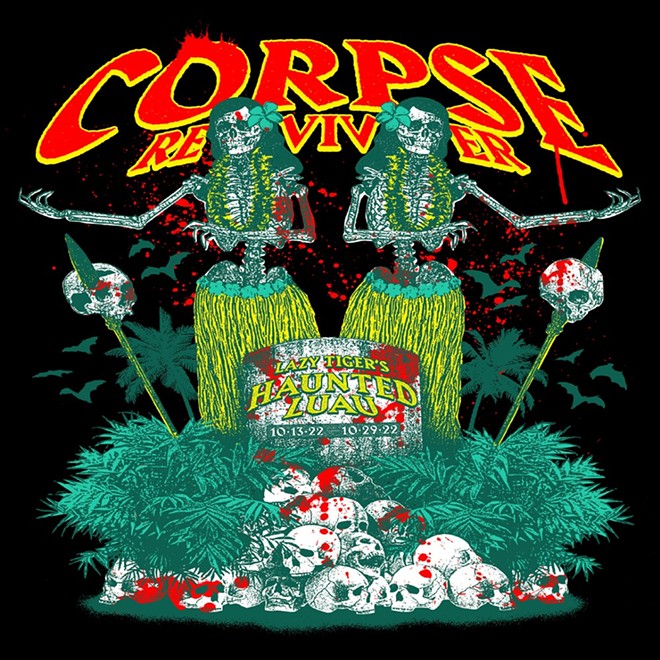 According to co-owner and acclaimed bartender Tim Wiggins, this year's Corpse Reviver, held at Lazy Tiger, will be a bit different from those in years past.

"In the past, we've leaned into more traditional Halloween things like pumpkins and stuff like that," Wiggins says. "This year, we wanted people to feel like they were on this abandoned haunted tropical island — not take things too seriously and have a fun take on it. We aren't doing skeletons falling in your face and creepy clowns staring at you. This isn't a fright fest but more of these haunted, spooky and kind of hokey things."

Born on Halloween, Wiggins says that he has always had an affinity for this sort of nostalgic, vintage Scooby-Doo/Brady Bunch-goes to Hawaii way of celebrating the season. This year, he and his team have tried to capture that feeling by playing up Yellowbelly's and Lazy Tiger's existing equatorial themes and adding a haunted surf rock playlist and decorations that suggest paranormal Tiki.

But it's not only the theme that is getting an update this year. Based on feedback he received from last year's pop-up, Wiggins is adding food to the experience. Yellowbelly's chef has created a family-style, luau-inspired menu for the occasion, featuring dishes such as a teriyaki-style cold soba noodle salad, spam fried rice and a pork-butt plate with slaw and crispy potatoes.

As for drinks, Wiggins has been excited to play around with variations of classic Tiki cocktails. Look for drinks like the Creature in the Surfer's Lagoon, made with gin, seaweed, blue curaçao, sour blue raspberry distillate and lime acid, or the Death by Beachball, which pairs hibiscus-infused rums with spicy ginger, fresh banana puree, Campari and pineapple.

"It's fun because tropical and equatorial and island-style is the world we live in here," Wiggins says. "It's fun for me to re-imagine what that could mean rather than just playing up allspice and pumpkin and putting smoke into traditional molds. My team and I are excited to try to come up with something a little more unexpected."

Because of Corpse Reviver's popularity — the inaugural year's first-come-first-served setup saw lines around the block, and last year, reservations booked weeks in advance — Wiggins has capped reservation times at 90-minute blocks. Guests are encouraged to secure their spots through Resy for tables that seat up to six.

As they did in previous years, Wiggins and his business partners will be donating a portion of Corpse Reviver proceeds to the ACLU. He's proud of the fact that the Halloween pop-up has already raised more than $10,000 for the organization over the past three years. Wiggins is confident that this giveback, together with the fun paranormal vibes, good food and drinks, will make Corpse Reviver 2022 an essential part of October in St. Louis.

"The excitement the community has for it and the fun it brings for the staff — we're just really happy to bring that back again this year," Wiggins says.