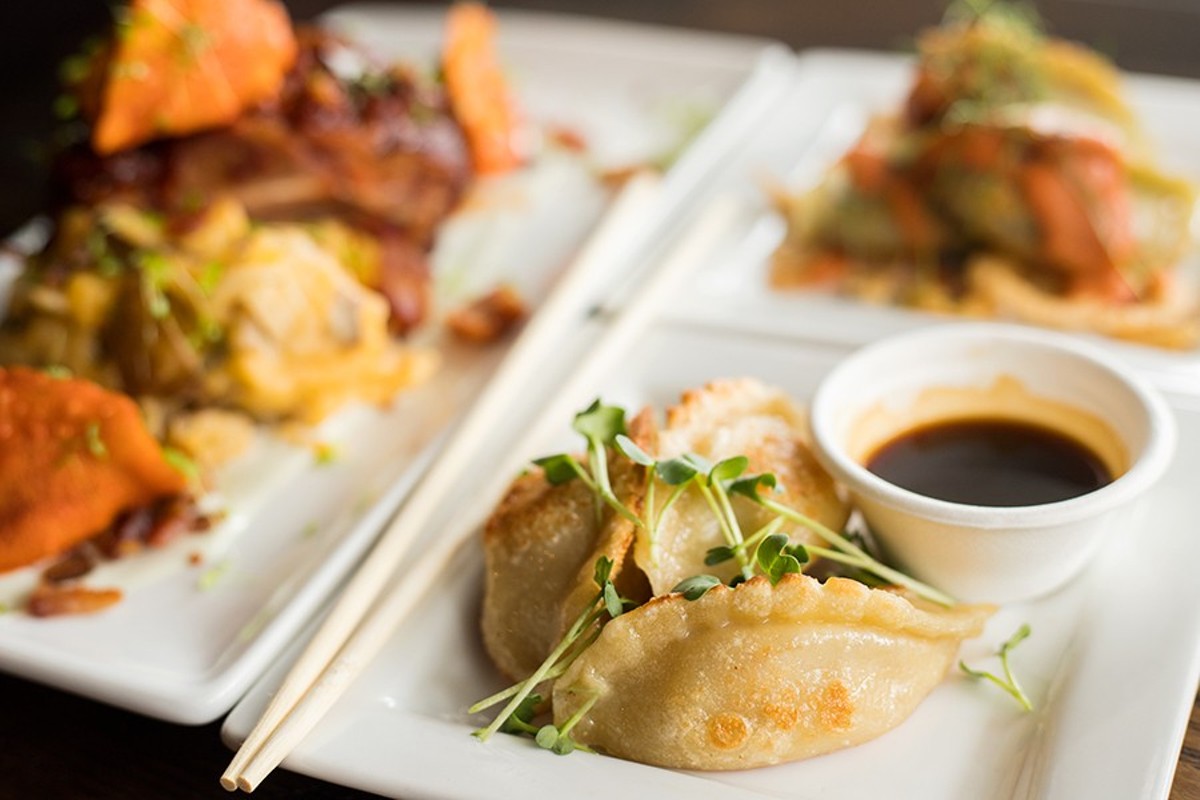 Traditional potstickers are stuffed with ginger pork and cabbage, then served with citrus ponzu glaze and daikon microgreens. MABEL SUEN

At the Crispy Edge on a recent glorious autumn Sunday, the only thing sunnier than the weather was owner David Dresner's disposition.

"Happy potstickers!" he called to our party as we walked out the door, a goodbye that was no gimmick but rather an earnest expression of enthusiasm for all things dumpling.

Coming from anyone other than Dresner, the sendoff might seem ridiculous. However, a passion for potstickers is woven into the very fabric of Dresner's being. And it's not a recent development. He's been this way ever since he was a little kid, making dumplings alongside his grandfather in the Chicago suburbs.

At first, it started out simply as a way to connect. After successfully battling cancer, his grandfather left a career in the military and business to go to culinary school, and he was eager to share his passion for food with an equally eager Dresner. 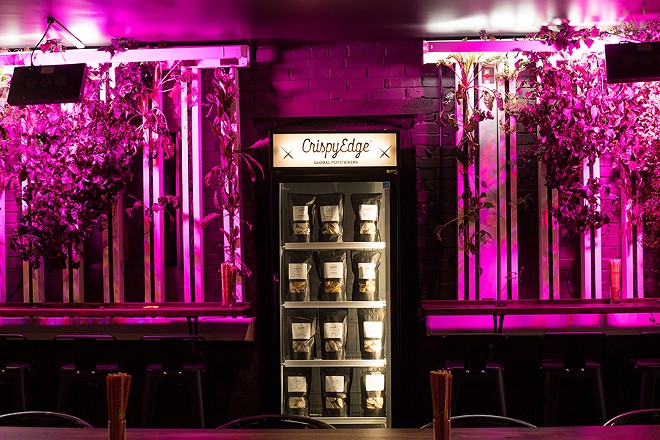 MABEL SUEN
The restaurant is just one part of a much bigger wholesale operation.

But it wasn't just any food that would bring the pair together. Dresner's grandfather was a Korean War veteran, and he'd fallen in love with the Korean dumplings called mandu when he was serving abroad. It was his culinary go-to, and some of Dresner's fondest memories involve hanging out with his grandpa, hands covered in dough.

Those experiences served as a jumping-off point for Dresner's own love affair with dumplings. As a kid, he would stop at a local chop suey restaurant on his way home from school, eating as many as he could before returning to a mother annoyed he had spoiled his dinner. Every chance he got, Dresner was eating potstickers, and as he got old enough to cook on his own, he used them as a vehicle for culinary exploration, creating recipes and perfecting his dough as he translated all of his favorite flavors into his favorite food item.

In hindsight, Dresner seems destined for a career as a potsticker entrepreneur, but he did not set out with that in mind. After graduating from Washington University's Olin School of Business, he launched Sleeve a Message, a company that creates custom beverage sleeves and drink coasters. The success of that business got him to thinking: Why not combine what he had learned with his passion for potstickers? It had long bothered him that mass-produced potstickers lacked the quality he craved in both the dough and the fillings. Surely, he thought, he could find a way to do it better.

Dresner originally launched Crispy Edge in 2013, intending it to be strictly a wholesale potsticker manufacturer, and that model still stands (that the restaurant is not his main business explains the limited, weekends-only hours). However, after purchasing the former Grand Oak Hill Community Center as his production facility, he began offering his potstickers to the public in a series of pop-up dinners in the retail space of the Tower Grove South building. The success of those events helped the dining business take on a life of its own, and before he knew it, he was hosting private dinners, adding cocktails and sake, and offering regular hours for customers to come in and experience his creations. In other words, he was running a restaurant.

As a first-time restaurateur, Dresner had the business sense to bring on others with experience in the industry, in particular Tori Foster, who serves as his executive chef. Foster, a Johnson & Wales alum and graduate of Saint Louis University's nutrition program, has helped Dresner refine his vision from a culinary standpoint and has also been instrumental, with manager Jesse Stuart, in executing the restaurant side of the business.

Their experience shows through in the design. Painted wall to ceiling in deep indigo, the cool, lounge-like room has an intimate feel that seems tailor-made for date nights. Wooden two-seater tables provide seating, along with a communal version down the room's middle, while a small bar sits at the back of the room. The walls are decorated with black-and-white photographs of Asian street scenes, and a living wall of microgreens not only provides ingredients for many Crispy Edge dishes but also casts a soft, pink glow over the room from its grow lights.

MABEL SUEN
A couch beckons customers from the street.

Dresner says the dark palette was chosen to provide dramatic contrast to the light-hued potstickers. You could eat Crispy Edge's offerings blindfolded, however, and still appreciate them. Deemed "global-inspired potstickers," the dumplings are a fun vehicle for an eclectic mix of international flavors, including the "Azteca," a pillow of rustic, nutty dough flecked with chia seeds and stuffed with cilantro-laden bean dip. The texture is excellent: firm yet yielding, thick enough to contain the contents but not so dense as to be doughy. A warm tomato salsa provides a bright, piquant dipping sauce, while the lime crema drizzled on the plate adds richness. That Latin-inflected food works so flawlessly in potsticker form confirms Dresner is on to something.

The "Chorizo Date" potsticker pairs mild, paprika-forward sausage with the sticky fruit. The date's flavor is muted, but provides a subtle sweet backbeat to the savory meat. The filling is nestled in turmeric dough, which gives the potsticker an earthy warmth. Pea shoots garnish the dish and lemon-pepper cream is served on the side in a ramekin for dipping. The sauce is fine enough but does not stand up to the deep flavors of the turmeric and chorizo. I found it unnecessary and opted to eat the potsticker without it.

Crispy Edge's "traditional" potsticker is Dresner's ode to the dumplings that made him fall in love with the form. Savory cabbage and pork, kissed with black pepper, comprise the interior; the thick exterior dough is perfectly caramelized and the seam fries up to a crisp. One bite makes you understand Dresner's choice of names: It's a solid version of a classic dumpling. My only quibble is that I wished for more filling; there wasn't enough to prevent it from being overpowered by the show-stopping wrapper.

The "Buffalo Chicken" does not have that problem. Here, the fiery Buffalo chicken filling perfectly fills its garlic-herb dough shell; the finely minced meat is mixed with just a touch of cream for a wonderful richness. The decadence is cut even more by Buffalo sauce that is glazed over the postickers. Cilantro-lime sauce is paired with the dish for dipping, adding creaminess but not much in the form of additional flavor. The stickers, however, are good enough on their own that you don't miss an extra condiment.

In addition to the standalone potstickers, Crispy Edge serves a handful of dumpling-centric entrées for dinner. "From the Sea" pairs the traditional pork-and-cabbage potsticker with beautiful, thinly sliced seared ahi tuna and wasabi-dressed cucumbers cut so thin they are translucent. You'd be happy to get such a beautiful piece of fish at a sushi restaurant.

Likewise, the St. Louis-style ribs in the "For the Party" entrée compete with the city's top barbecue spots. Glazed in tangy, sweet-tomato barbecue sauce that has caramelized, forming a sticky coating on the meat, the succulent meat easily pulls apart, revealing a buttery layer of fat. The ribs rest atop impossibly rich bacon-and-cheddar mashed potatoes and are served with the restaurant's "Buffalo Chicken" potstickers. It says something that my favorite dumplings at Crispy Edge barely registered in this dish because I was so mesmerized by these perfect ribs.

And Dresner does not stop there. A full potsticker-focused brunch menu is also available on Sundays with such dishes as huevos rancheros, which here combine "Azteca" potstickers with over-easy eggs, bright tomato salsa and cojita cheese. Quiche is represented in potsticker form as chive dough filled with velvety goat cheese and eggs and served with a side of luxurious tomato hollandaise.

Though I appreciated the idea of the "Biscuits and Gravy" potstickers — sausage-filled dumplings covered in sausage gravy — I wanted more spice to the meat. I preferred the "Bagel and Gravlax," a nod to Dresner's Jewish heritage, which features an "Everything Bagel Potsticker" covered in house-cured salmon, capers and lemon cream. Though the dough did not quite have the aggressive seasonings of a traditional everything bagel and the texture was on the mushy side, I loved the interplay of the salmon, capers and the herbs present in the dough.

Crispy Edge was featuring two seasonal potsticker desserts on my visit. The first, a pumpkin-filled dumpling, is awe-inspiring, capturing the essence of a homemade pumpkin pie but providing the guilty pleasure of a fried apple pie. Covered in bourbon whipped cream, it's fantastic. A collaboration with Eckert's is equally excellent. Apple-filled potstickers are topped with toasted pecans and caramel sauce — evocative of a candy apple, only better.

Someone who can come up with such a fun, whimsical concoction as a candy-apple potsticker clearly has a lot of love in his heart for the dumpling art form, and Dresner's genuine passion is unquestioned. Since he opened, however, he has been met with a good amount of criticism, not so much about the execution, but whether he should be producing Asian-inspired food in the first place. Dresner bristles at any mention of cultural appropriation, insisting that his point is not to "elevate" or change an already perfect food but to take it in a heretofore unexplored direction. If we start putting up fences around what people are allowed to cook, he says, we head down a dangerous path.

MABELSUEN
The restaurant has a sleek, stylish look.

I'm sympathetic to both arguments. A dear friend is the daughter of immigrant parents who toiled away hand-making dumplings into the wee hours of the morning so they could eke out a living to support their family. She cringes at what she sees as a white man yuppifying her parents' food and using her experience as a gimmick. Yet I am also moved by Dresner, whose love of potstickers was sparked by his relationship with his grandfather and still remains a way for him to connect with those memories. The earnestness to what he is doing is undeniable.

Dresner says he sees Crispy Edge as a way to pay tribute to the potsticker, and that what moves him most about Asian cooking culture is how family-centric it is. Perhaps he and my friend have more in common than is at first apparent. If the potsticker is a vehicle for making outsiders see that, then Dresner is right: It is the perfect food.