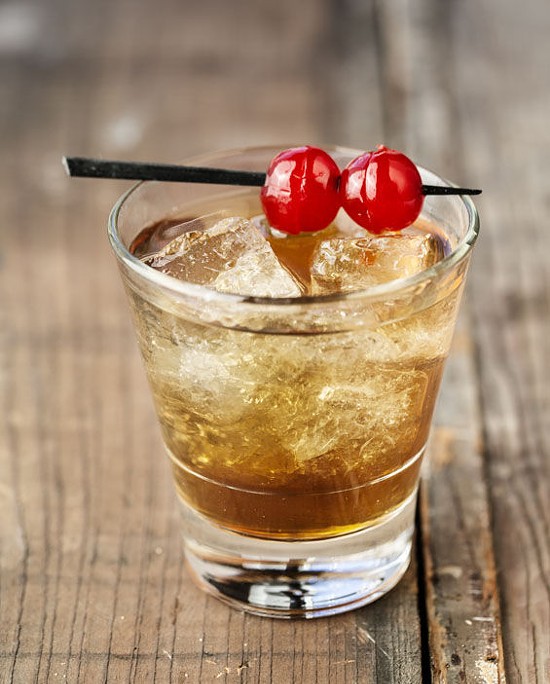 A Manhattan at Blind Tiger in Maplewood | Jennifer silverberg

The folks at Blind Tiger (7376 Manchester Road, Maplewood; 314-646-8822), the speakeasy-themed pizza and ribs joint in downtown Maplewood, know a thing or two about whiskey. With forty different bottles of Kentucky bourbon, Scotch, rye and Irish whiskey, Blind Tiger has set itself up to be the place to go for the popular spirit.

Whiskey bars seem to be springing up everywhere, and the popularity of craft cocktails encourages mixologists to come up with creative concoctions that showcase the spirit. However popular it is, though, whiskey can be an acquired taste. I asked Blind Tiger's bartender, Sam Fick, what he would suggest for those wanting to get in on the party but who may be a bit intimidated.

"I'd begin by asking them what they already like," says Fick. "If they're already a whiskey drinker, I find out what they usually drink. Then I make suggestions based on that. We don't really have the common brands, like Jack and Jim Beam, but we have things that they will like if they are into those. It's a matter of finding out why they like what they do, then finding the right one."

For novice drinkers, Fisk starts them out slow. "We have a really good Kentucky straight bourbon called Angel's Envy that is lower proof, 86 proof, so it's solid but really smooth. I would suggest that to start out with." Fisk also recommends a cocktail for whiskey beginners - "something with ginger ale so they can still taste it but it's not overwhelming." (Speaking of cocktails, look for Blind Tiger's cocktail menu to debut in early March).

"When people start out drinking whiskey, they might be afraid," Fisk says. "When you first taste it, you are probably going to think that it all tastes the same. It's a lot like wine. You try different kinds and invite your taste buds to pick up the differences." Like wine, Fisk also warns against equating high prices with quality. "Just because something is expensive doesn't necessarily mean it's better. There are good whiskeys at all prices."

Fisk is confident that, given the right introduction, even the most novice whiskey drinkers can find something they will enjoy. "Our motto is that not everything is for everyone, but we have something for everyone."