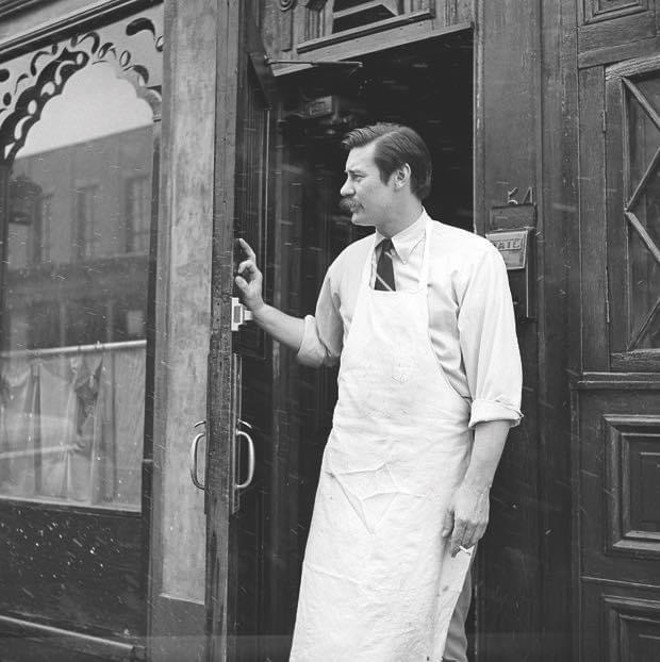 Aside from a couple of random cash hustles, my first real job was enjoyed as a busboy at O’Connell’s Pub, circa 1985, or thereabouts. That, of course, meant that the bar’s longtime owner ​Jack Parker​ was my first boss. It didn’t take long for the relationship to become official.

On my maiden shift, I wore my go-to shirt of that moment, a long-sleeved, vertically striped affair with a Nehru collar. It was untucked and with my shirt-tails flapping, Jack ambled over within two minutes of the door opening and mentioned (and this is verbatim) that “that’s not how we do it here.” With the message received, I tucked in, finished my shift and spent the next 35 years at least a touch worried when Jack was around, even though I only worked there for about two years in the mid '80s. Hundreds, if not thousands, of St. Louisans knew him at least a little bit well, and we all came into his orbit at different moments and in different roles. But for me, and maybe a few others along the way, he’ll always have that authority figure vibe in our minds.

Really, his presence is something that I felt every time I’d walk into that golden-lit barroom at Kingshighway and Shaw, even when he wasn’t onsite. It was always ​his​ place, even after he passed the management reins to his nephew, Fred.

It was only with his okay that a lot of us came into that employ. I scored my own gig the old-fashioned way: by knowing someone. It was my friend Pete who set it up. He’d come on as a legacy worker, himself, as his mom Kitty was serving tables there, while Pete bussed weekend nights. At that time, the staff was largely set and shifts were rarely open, whether on the floor, in the kitchen or behind the bar, where tag teams like Lenard-and-Red and Kim-and-Ron entertained their regulars, poured countless drinks and added to that overall, traditional feel that permeated the place.

“Tradition.” Always the watchword at O’Connell’s. From the smoking at the bar to the lack of tomatoes to those dusty-headed gnomes that appeared above the bar every Christmas season — back then, all elements were explained as done-that-way-because-they-were-done-that-way. It’s always felt lived in, homey. And that made sense, as this beast of a building was, in fact, a bar long before O’Connell’s arrived in the early fall of 1972. But when he brought a lot of the woodwork and chandeliers and bric-a-brac, well, it was thought a new bar and that old bar, all at once. His collections — be they old prints of older boxers, pictures of his winning race horses or weathered whiskey signage — were more than just decorations.

By 1972, of course, the pub’s reputation was already well set after many years at the edge of Gaslight Square; that year, it would be the last major business to finally depart the famed-then-faded entertainment district. By the time I hit the scene to wash glassware and mop up spills, a few of the workers were well into a decade of service, several dating back to the days at Boyle & Olive. Parker’s own arrival as a proprietor came a few years into its original operation (and Ann Lemons Pollack has done a marvelous job of summing up the highlights of the early years ​via St. Louis Magazine’s blog​ this past weekend). At the time, I recall conversations about Gaslight taking place all around me, though I was too young and uninterested to really clue into the meaning of it all.

Fast-forwarding a couple of decades, I ended up getting hipped to that long-gone area, eventually working on a book called Gaslight Square: An Oral History, published in 2004. At the time, Jack Parker, interviewed in his upstairs lair of J. Parker Antiques, provided one of the kickoff interviews. He’s featured on the book’s cover and is the first, full Q-and-A in the project. All of that made sense, in that Jack was frequently cited in stories about the Square, and little media attention about the Square didn’t at least mention O’Connell’s and Parker. Thus, these three elements (an owner, a business, a neighborhood) became interwoven over time. He surely didn’t know that in taking on a lease in the mid '60s that he was also signing a lifetime contract as spokesman for a doomed, brilliant flash of St. Louis history.

Kicking forward a couple more years, I was brought on by a family member to write a lil' book about the place itself, as it moved toward its 50-year anniversary. By this point, I could sense that Parker had had enough interviews and sit-downs and drop-ins about Gaslight to last a lifetime. There were days when the topic was fine to bring up, and there were others when you could sense that it wore on him, this unofficial role as the district’s living link. There were surely afternoons when he wanted to sit upstairs, enjoy some iced tea and a smoke without someone walking up those many steps to rifle through his box of Gaslight keepsakes. (And what a box it was, loaded with newspaper clippings, ticket stubs, playbills and the like.) As bad luck would have it, in a moment of haste, I accidentally erased the entire contents of a digital recorder, and poof!, the idea ended.

But as that deflated project began I had my second awkward run-in with Jack. In the Gaslight book, he referenced someone specifically and wished he hadn’t. Books being what they are, there wasn’t much to be done but apologize for any miscommunication. He felt, and conveyed to me in no uncertain terms, that the comment, a short one, wasn’t kind and didn’t need to be included. There wasn’t a need in the canon, he felt, for this single, throwaway comment and it rubbed him the wrong way for all those years. This idea that he’d slighted a contemporary made him feel bad about his role in talking about the Square, and I felt I’d disappointed him, in turn. Over time, it dawned on me that he really did carry the Square’s weight.

That conversation was never really brought up again. And, in becoming a pretty solid regular at the bar for a few years, I had plenty of time to chit-chat with him during his frequent bar cameos. Usually right there at the west end of the tavern, pressed near the server’s station, where the best conversions have taken place, staffers and customers cracking wise, Jack coming by for a self-pour from the iced tea pitcher. Hard to imagine those scenes not continuing another decade.

Jack Parker died at age 83 on June 19. ​As Lemons Pollack reported​, “According to his son, John Parker, Jr., his father died from heart failure while in the hospital, following treatment for an intestinal disorder.” He was more than a bar/restaurant proprietor, of course, but in that role alone he leaves us as a legend.