Welcome to Girl Walks into a Bar, a weekly Gut Check feature that spotlights local bars and bartenders. This week Alissa Nelson profiles Danno's American Pub bartender Chris Muether. Below is a Q&A with Muether, followed by a video of him mixing an Agent Orange cocktail. 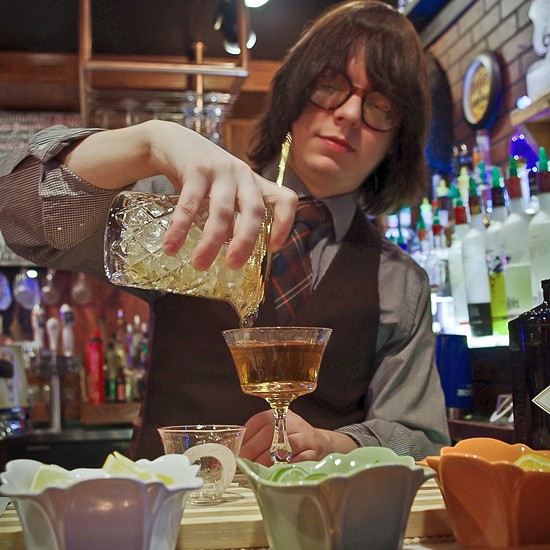 Alissa Nelson
A martinez by any other name: The Agent Orange cocktail.

Danno's American Pub (7895 Watson Road, south St. Louis County; 314-395-3000) is a hidden treasure on this stretch of Route 66 that winds through south St. Louis County. In contrast to the unassuming exterior, the space boasts a warm copper-and-wood bar buffed by years of elbows. The wild boar on the sign previews the mounted heads on the walls, some adorned by gaudy beads, others wearing only a snarl. Along one wall, you can peek through a glass at a diorama of the bar as it once looked -- not too different from today -- presided over by George Hagiparis, Chris' grandfather.

The younger Muether never expected to work behind the bar. "We sold the business, rented [the building] to the folks who were doing Cruisin' Route 66, and as soon as we sold it I thought that chapter in my life was gone. I went to school, studied political science and worked as a community organizer until 2008. Then the economy took a hit, the campaigns ended and I couldn't get a job."

Then Cruisin' Route 66 closed, and the family reopened the space as Danno's, the name a nod to George's son-in-law, Dan.

Chris Muether crafted a creative list of microbrews and went to work studying spirits and the history of cocktail culture. Inspired by a trip to the Asian-inspired New York City speakeasy Angel's Share, he began flourishing a cocktail shaker. Aspiring to the mixological stylings of local luminaries Ted Kilgore (Taste by Niche) and T.J. Vytlacil, Muether joined the local chapter of the United States Bartenders' Guild and dove headfirst into the competitive cocktailing scene.

"Me and T.J. qualified for the finals of the Greater Kansas City Bartending Competition," Muether says. The young upstart finished in the top ten, raising eyebrows around town -- including, presumably, those of Kilgore, who judged the event.

2011 will bring big changes at Danno's, with an expanded, "amped up menu" featuring new dishes by Muether's mother, Linda, as well as an extensive cocktail menu that'll roll out in the next few weeks.

Click through for a Q&A with Muether and a video of him mixing an Agent Orange...

Favorite drink to drink? More often than not, I'd rather try something completely new than something safe, but lately I've been drinking a lot of Sazeracs.

Favorite drink to make? Our house Contemporary Manhattan at Danno's is by far my most popular drink, and it's fun to make. We're using Buffalo Trace bourbon, Dolin Rouge vermouth, [Fee Brothers] Whiskey Barrel-Aged bitters and just a bit of maraschino liqueur and house-made cinnamon-bark honey syrup. It's a fairly rich and spicy variation on a drink I think would have to be among most bartenders' favorites.

Drink you hate making? Any drink with heavy cream, because it congeals on the sides of the glass if you don't clean it immediately. I also hate when I'm bogged down in orders and get a request for something tedious and time-consuming to make, mainly because I love making difficult drinks but i don't want to cut corners on the difficult drink or leave the rest of my guests waiting on me to dry-shake an egg.

Favorite drink you created yourself? That's a tough call. Usually it's whatever I've most recently concocted. I've been really digging this drink I made called Fjords of Valhalla, which is aquavit, lemon juice, green chartreuse and a bit of Bärenjäger honey liqueur. It's acidic, peppery and spicy, with a bit of sweetness in the finish. Definitely a must try for chartreuse drinkers (and there's more of them out there than ever lately).

What's the worst drink you've ever had? I've had some pretty hideous manhattans at bars I'm kind enough to not mention the names of. I think it was bad vermouth on top of it being shaken and served without bitters. Nowadays I tend to order a beer if I'm unsure of an establishment's ability/will to put a little care and effort into a cocktail.

Favorite nonalcoholic drink? During the summer I dig sno-cones. Nothing says summer like an awesome sno-cone. This time of year, give me a craft/microbrewed root beer or cream soda.

What do you drink when you're...On a plane? Ginger ale. It's one of the few times I think of it, actually.

At a wedding? Don't go to many, but probably gin-and-tonics.

At your parents' house? Cognac or scotch.

Favorite canned beer? I've been really obsessed with canned beer this year. I think O'Fallon's Wheach tastes much better in the can. But for my favorite, I'm going to have to say Young's Double Chocolate Stout. Definitely a game changer in the canned-beer department.

Worst/best thing you've ever seen happen in your bar? Just this week this kid Jerome sang the most amazing version of Sam Cooke's "A Change Is Gonna Come" on karaoke night. Mind-blowing stuff. If you want to hear about some of the worst things I've seen, come in and pick my brain about it over a drink.

How do you keep yourself occupied on a slow night? Talking to Jon Hellwig, working on new cocktail recipes, wiping something down.

Who would you most like to have a drink with? I'm not sure if he drinks or what he'd drink, but it'd be great to sit down with free jazzer/avant-garde composer Anthony Braxton for a while. His books/interviews always blow my mind. I'd also like a chance to hang out with Noam Chomsky before he passes away.

Where are you most likely to be found when you're not in this bar? Probably Taste by Niche, Eclipse, Pi, Mangia Italiano, Atomic Cowboy. I don't get out often, though, since I work a lot. Tell all the restaurateurs to keep their establishment open on Sundays/Mondays, because my choices on my nights off are fairly limited!

Most unusual liquor you've seen? I feel like over the past year, I've been exposed to so many brands and bottlings its hard even remember or comprehend them all. The strangest, though, would be the snake whiskeys from Asia. I've read that if your gums bleed, you should avoid this whiskey because it could get poisons into your bloodstream. No thanks! I'm not Anthony Bourdain.

If you could start a band, what kind of band would you start? I already have a band, the Lonely Procession. Your fine publication awarded us "Best Noise Band" in 2009. Thank you again. I play cello in it, and I feel my style of playing (based fundamentally on extended technique and free improvisation) comes out a lot in my bartending style, actually. I try to practice a lot of restraint in my use of ingredients, just as i try not to overplay in my musical endeavors. I've always been a bit of a modernist, so I value temperance and minimalism.

Best/worst drinking holiday? Drinking holidays are for rookies. I've never been a fan. However, I've always liked New Year's Eve, for the most part because some pretty amazing stuff has happened to me on New Year's Eves. Worst I'll give to Mardi Gras, because after the last one i didn't even want to talk about margaritas for a month.

Biggest tab you've ever seen? We had this group of paramedics for a fire department come in last year for a party. One guy covered their whole tab, and it was upwards of $1,300. I've seen some lone wolves run up $200-plus tabs, though.

My bar is the only bar in St. Louis where... You can play Wii Bowling on Wednesdays while listening to some of best DJs in the city and sipping on a pre-Prohibition-style cocktail. Or a PBR, whatever's more your speed.