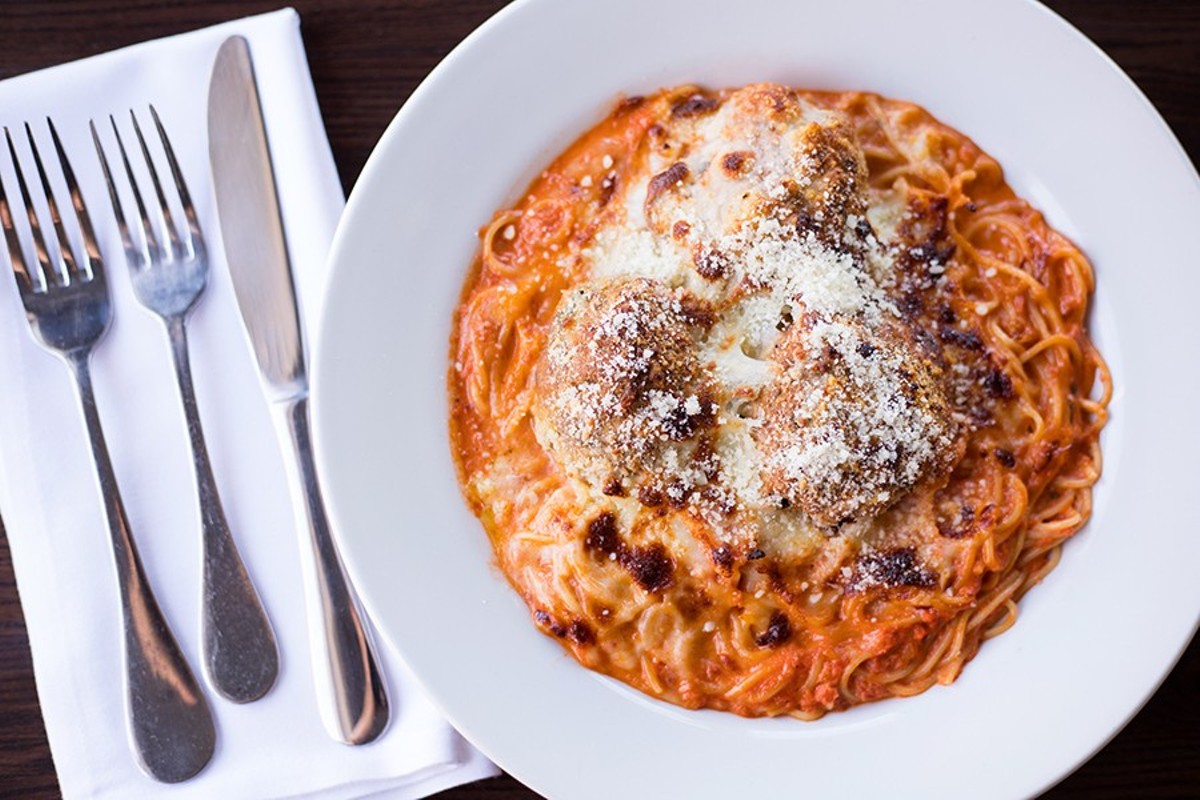 Mary Rose Del Pietro works the dining room at the Richmond Heights restaurant that bears her last name like a queen holding court, breezing past table after table, sometimes with just a wink and a smile, other times with a casual, "How are you enjoying the ravioli?" If she gives you that question, keep in mind that she is not asking for a response. The raven-haired matriarch has been doing this for decades, and there is nothing you could tell her that she doesn't already know.

Maybe she would have needed your feedback back in 1976, the year she and husband Michael Del Pietro Sr. opened the original Del Pietro's on Hampton Avenue. Then again, maybe not: They seem to have figured everything out just fine on their own, reigning over one of the city's dining mainstays for more than three decades by serving up unapologetically American-style Italian comfort dishes like veal parmigiana, chicken piccata and sweet Italian-dressed salads.

For most of that time, their son Michael Jr. was there, working alongside his mother and father as soon as he was old enough to polish bar glasses without breaking them. Restaurant work was mandatory in his family, but he fell in love with it in spite of his father's insistence that he put the family business before any extracurricular activities. He found the work challenging but fun and decided to go into the business in his own right, enrolling in the University of Nevada, Las Vegas hotel and restaurant management program just after high school.

MABEL SUEN
The restaurant fills the space that was previously Riverbend and, before that, Harvest.

After the sudden passing of his father in the late 1980s, Del Pietro Jr. left school at nineteen and returned to St. Louis to help his mother run the family business. Once he was comfortable that she was on her feet, he went back to school, this time at the Culinary Institute of America in New York, to finish what he had started.

Though the family's old-school Italian dishes were in his blood, Del Pietro Jr. had something more modern in mind when he moved back to St. Louis after culinary school in 1994. Content that his mom's place was doing well, he opened Portabella in Clayton that year to make his own name in the business. Eight years later, he launched a mini-empire, eventually opening the late Luciano's, Sugo's Spaghetteria, Babbo's Spaghetteria, Via Vino and Tavolo V.

Throughout that expansion, the original Del Pietro's remained open for more than a decade. After Mary Rose decided to retire, in 2011, the family finally closed its doors.

Although he had his hands full with his other restaurants, Del Pietro Jr. felt the pull to keep his family's legacy alive. Last year, after Riverbend pulled out of the old Harvest space on Big Bend Boulevard, he knew he'd found the ideal location and got to work transforming the space into a brand-new Del Pietro's.

Patrons of the iconic Harvest (may its bread pudding remain eternally in our hearts) previously dealt with the shock of seeing their beloved restaurant transformed when the Cajun concept Riverbend took over the space in 2014. While that remodel was mostly cosmetic, the Del Pietro's renovation is basically a full-gut rehab that entailed removing the elevated platform in the dining room, moving the bar to the front of the restaurant and knocking down a half-wall in the main eating area. The result is a sleek, open space, outfitted with neutral tones, exposed brick and white tablecloths. Oval-shaped lanterns hang from the ceiling, and thick, taupe-colored curtains break up the wall space while rustic floral arrangements give a spa-like vibe.

But though this Del Pietro's may look totally new, it's not completely reimagined. Even while the chefs have crafted new menu items, Del Pietro Jr. also pays homage to the old ones, making the restaurant at once a way forward and a revival.

Those classic dishes are what Del Pietro Jr. grew up eating in his grandmother's kitchen — and what diners ate at the original location on Hampton. Eggplant Parmesan, for instance, oozes with creamy buffalo mozzarella cheese and bright tomato sauce so fresh it tastes only minutes removed from the vine. The eggplant's meaty flesh, dusted with the perfect amount of salt, soaks up the cheese and sauce concoction, proving that quintessential comfort needs no update.

Fritto misto is equally perfect in its classic form. Squid and shrimp are dusted in flour and breadcrumbs, then dunked in the fryer. A little salt, pepper and some vibrant lemon aioli is all it needs to shine.

Meatballs the size of mandarin oranges are, likewise, expertly executed: tender, flecked with breadcrumbs, cheese and parsley, then shaped into spheres without being overworked. The result is a meatball that holds its form when served but falls apart with ease when prodded. The delectable house tomato sauce and Parmesan cheese cover the top of the dish, balancing each meaty bite with tartness and funk.

Many restaurants claim to serve the city's best toasted ravioli, but Del Pietro's makes a serious play for the crown. The handmade dough, sprinkled with breadcrumbs and stuffed with a blend of beef and veal, crisps up after a few minutes in hot oil. Unlike the chewy frozen versions you find at sports bars, these are flaky and light as air. Perfect as the original version is, Del Pietro's changes up its t-rav selection from day to day; on another occasion the pasta was filled with mascarpone cheese and chicken — a decadent concoction that evokes the gooey comfort of buffalo chicken dip. Both options were perfection of the form.

Del Pietro's house salad is no more exotic than what you'd see at any of the other old-school Italian restaurants around town, but its flawless execution makes it a thing of beauty. Its lettuce is iceberg cold, its red onions shaved thin, and its red-wine vinaigrette a mouthwatering balance of sweet and tang that serves as a refreshing intermezzo between the hearty appetizers and the even heartier dishes that are to come. Crunchy, cold and zesty — there is a reason every St. Louis Italian spot worth its cannoli puts a version of this salad on its menu.

MABEL SUEN
You simply must order the cannoli.

The heartier dishes include "Spaghetti alla Angela," a cheesy-baked concoction of meatballs, noodles and tomato sauce that calls to mind the warm comfort of red-and-white checkered tablecloths and wicker-covered Chianti bottles. Though not cheesy, the Bolognese is just as rich. Beef, veal, cream and just a touch of tomato smother the long, housemade noodles to the point that the dish may as well be a stew. Not that you'd want any less of this decadent meat sauce. Even after three of us put away a heaping bowl of it, we still scooped up every last morsel with the pieces of crusty bread that remained from our bread service.

Like the house salad, there is nothing revolutionary about the Del Pietro's chicken piccata — which is exactly why you order it. Lemon, butter and capers enliven tender, flour-dusted chicken breasts the way your favorite little black dress hugs your curves. It's timeless.

Two off-the-menu specials were equally dazzling. A massive hunk of medium-rare tenderloin was covered in creamy mushroom sauce and served atop pasta. The juices from the beef mingled with the mushrooms, forming a rich, beefy glaze that clung to the noodles. However, my favorite dish at Del Pietro's was also the simplest: a grilled, skin-on piece of branzino accompanied by lemon-scented farro. There was no sauce to cover up any flaws, no cheesy richness to hit me over the head — just simple, fresh fish, its succulent flesh kissed with grill char and a whisper of citrus. Of all the offerings I tasted, this one showed off the kitchen's skill most clearly.

Del Pietro's smartly partners with the adjacent Hank's Cheesecakes for a few of its desserts, though you'd be a fool to leave an Italian institution like this one without trying a cannoli. Crisp, mascarpone-filled and covered in caramel sauce, they're a reminder that, no matter how thrilling the city's modern dining scene may be, there is always room for the classics.

Just ask Mary Rose Del Pietro. In her half-century of working the room she's seen it all, yet never bent to the pressure of turning her restaurant into anything other than what it was meant to be — an approachable, at times elegant, bastion of St. Louis-style Italian comfort. Even in its new digs, with a hint of Del Pietro Jr.'s contemporary polish, that still shines through — and demonstrates why it will never go out of style.