Dinner and a Movie: Alice in Wonderland and the St. Louis Tea Room

Tim Burton was born to direct Alice in Wonderland. Inspired, of course, by the Lewis Carroll novels Alice's Adventures in Wonderland and Through the Looking-Glass, and What Alice Found There (with a special emphasis on the latter's Jabberwocky poem), the film is up Burton's alley: It's at heart a children's tale but contains fantastical, macabre and adult overtones -- and a misfit protagonist that doesn't follow societal conventions.

Annie Zaleski
Drink me!
Alice (played by Australian Mia Wasikowska) is a 19-year-old coping with the death of her beloved father, a man who always encouraged her imagination and smarts. As the movie begins, she's being berated for not wearing a corset or stockings off to a party. Unbeknownst to Alice, it's her engagement party: She's being blindsided with a marriage proposal from a Lord with digestion problems. Duty and society clash with her heart and ambition - and overwhelmed, she flees the scene. Curiously, she sees a rabbit with a stopwatch and sets off in pursuit of him - which causes her to fall down a rabbit hole into a mysterious Underland.

From there, the movie mixes live action and computer animation, as Alice interacts with familiar characters: the Cheshire Cat, the Mad Hatter, Tweedle-Dee and Tweedle-Dum, Blue Caterpillar, the Red and White Queens. The movie's conflict is simple: Is Alice the correct Alice to fulfill Wonderland's destiny -- and if so, does she have the courage to do what they need?

The Red Queen, portrayed by a severe, pursed-lips Helena Bonham Carter, is as bitchy, demanding and unpleasant as you'd expect (and want). Her knave is Crispin Glover, meeker and less menacing than normal, but no less creepy and desperate. Anne Hathaway as the White Queen is wholesome, ethereal and sparkly. Johnny Depp, of course, is the orange-haired, chameleonic-eyed Mad Hatter. It's the kind of character Depp disappears into -- and one he's played countless times by now -- but he never seems like he's phoning it in. He's sufficiently disorienting in this role, whether spewing out nonsense or switching between a Scottish accent and a childish lisp.

Oddly, when the characters break stereotype -- i.e., the Red Queen ponders if being liked might be more effective than being mean, and the Mad Hatter expresses a yearning for Alice that's perhaps a wee bit non-platonic -- the movie feels awkward. The characters are one-dimensional for a reason -- perhaps to contrast better with Alice's struggles, or to better illustrate the fantastic elements of the plot. Exploring their feelings and emotions feels too Hollywood, a little too deviant from the movie's straightforward narrative.

But Alice is a kickass heroine -- literally. She's not a demure princess or a wilting wallflower. She faces her fears head on, she's not afraid to dream and she's bold when she has to be. She takes advice from the sage, hookah-puffing Caterpillar but ultimately looks to her heart for the right decision. Although it takes her a bit to believe in herself, this makes her the most realistic part of the film -- after all, how many times do we doubt ourselves -- or mistrust our gut instinct - before choosing the right path?

Without giving too much away, the movie's conclusion is satisfying. And like every other Burton film, the scenery is beautiful and vibrant, from gothic forests and fantastical castles to lush fields and a breathtaking showdown scene with nods to chess. 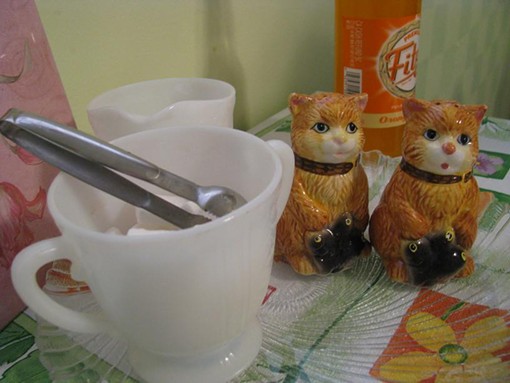 Annie Zaleski
Stepping into the St. Louis Tea Room (4001 Utah Street; 314-772-2998) feels a lot like Alice's spiral down the rabbit hole. The squat brick building is easy to miss; it's on the corner of a nondescript neighborhood block in Tower Grove South. But opening the door is a portal to another time and place -- an era when lunch required dressing up in your Sunday best and leisurely gossip chats were the norm, not a luxury.