Dishcrawl Invites Guests to Chow Down on Wash. Ave. 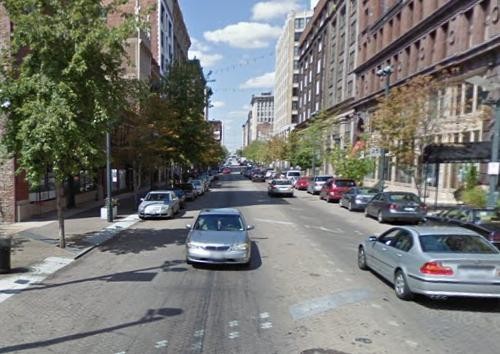 Progressive dinners might seem oh so 2010, but Dishcrawl is hoping to elevate the concept to bring it into 2013.

According to their press release, "Dishcrawl is a national startup that started in California and is based on the premise that communities can be brought together through good food and good company. It's like a pub crawl -- but more delicious! Diners will sample signature masterpieces and new treats that allow chefs to flex their creative muscles."

The California-based company is planning to host a series of restaurant crawls in St. Louis, beginning with a Washington Avenue crawl on April 24. Gut Check spoke to Sara Graham, the St. Louis Dishcrawl ambassador, to find out more about the company and the upcoming event.

"I chose Washington Avenue as the focus for our first event because of the sheer number and variety of top-rated restaurants in the area," Graham says. "I grew up in St. Louis -- in Soulard, actually -- and have been so pleased to see Washington Avenue grow into the hotspot that it is today."

Once Graham as settled on a neighborhood, she hand-picks the restaurants she'd like to showcase. She says she considers menu selection, online reviews and word of mouth in her decision.

"Various other organizations passionate about food and drink have events throughout the year," Graham says, "but I don't know of any consistent, widely publicized, affordable and accessible "foodie" event like Dishcrawl here."

At $45, the event is more reasonable than many tasting menus or fancy dinners at restaurants in St. Louis, and Dishcrawl hopes that food-loving folks will come out for the inaugural event. The "crawl" goes from 7 to 10 p.m., and at each of the locations on Wash. Ave., diners will receive a tasting trio that showcases some of the restaurant's best dishes.

Dishcrawl isn't yet announcing what restaurants are involved, but those who buy tickets will be alerted 48 hours before the event. Dishcrawl is also providing hints through social media.

The Wash. Ave. crawl is slated to be the first of many in St. Louis, though Dishcrawl isn't publicizing the locations they're considering next.

An intrepid reporter will be venturing out of Gut Check International Headquarters to join the Wash. Ave. crawl on April 24, so check back then for our thoughts on the event.