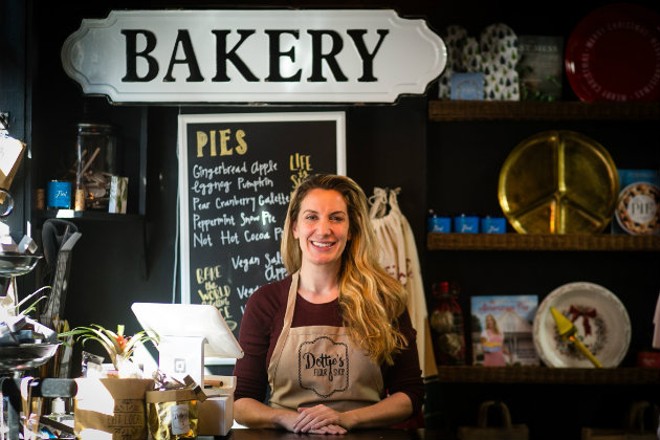 JEN WEST
Dottie Silverman left behind a successful career in law to follow her passion at Dottie's Flour Shop.

Looking back, Dottie Silverman realizes that she became a lawyer because she thought it was what she was supposed to do, not necessarily because it was her life dream.

"There are a lot of lawyers in my family, and I had a lot of exposure to the practice of law from an early age," Silverman explains. "When it came time to make a decision about what I was going to do, it seemed like the next step."

These days, Silverman is about as far away from the legal field as it gets, having traded the courtroom for the kitchen. As co-owner and chief pie-maker at Dottie's Flour Shop (9783 Clayton Road, Ladue; 314-692-8776), Silverman has finally given herself permission to follow the dream that dates back to when she was a young girl baking for her family.

Silverman showed her baking prowess early on. As a child, she was given free rein in the kitchen, and by the time she was in middle school, she was the family's resident baker.

"I had a mom who let me have room to experiment and have success and failure," Silverman says. "It ultimately ended up with me loving baking and learning through doing."

Though Silverman was passionate about baking, it never crossed her mind that she could make a career out of it. Instead, she took what she thought was the safe path, ending up with a successful career as an attorney.

Silverman enjoyed practicing law, but she found herself gravitating toward the kitchen any time she was stressed or needing to relax. But until she took time off work to raise her twin daughters, weekends were her only outlet. Though being a mother was no less busy than working full time outside the home, the time away from her law practice gave her the mental clarity to realize that, just maybe, it was time to pursue her passion.

"I found myself at a place where I was ready to go back to work full time, and I had a moment where I thought, 'OK, my lifelong dream has been to open a bakery,'" Silverman says. "I love baking so much and thought to myself, 'Wouldn't it be amazing if I got to do that every day?'"

At a crossroads, Silverman began talking with her friend Jess Lucas about her dream. Lucas was well positioned to offer not just advice but also assistance. As co-owner (with her husband Mark) of Fozzie's Sandwich Emporium and the recently opened Humble Pie, Lucas asked if Silverman would like to try her hand at doing desserts for the restaurants.

Silverman accepted the offer and eventually began to make a name for herself. With Lucas by her side, she began doing special orders and providing baked goods for a few other businesses in town. She found the work to be everything she had dreamed it would be.

When the Lucases shuttered Humble Pie in November 2017, they did not give up the real estate. Instead, they converted the space into Dottie's Flour Shop, so Silverman and Jess Lucas could have a dedicated kitchen and storefront for their growing brand. The pair opened the bakery in early November of this year and haven't looked back since.

"As much hard work as it is, we are having a ball," Silverman says. "It's not every day you get the opportunity to make a living out of doing something you love. I pinch myself every morning."

Silverman took a break from the pie shop to share her thoughts on the St. Louis food-and-beverage scene, the importance of buying local and why every occasion calls for pie.

What is one thing people don’t know about you that you wish they did?
I’m prone to mudita, which is experiencing joy vicariously through the joy of others. So if you have good news, share it with me!

What daily ritual is non-negotiable for you?
Morning coffee.

If you could have any superpower, what would it be?
The power to fly.

What is the most positive thing in food, wine or cocktails that you’ve noticed in St. Louis over the past year?
Locally sourced food featured in more and more restaurants. We think it’s important to source locally for not only the fresher product, but more importantly, to support your local farmers and to invest in your community.

What is something missing in the local food, wine or cocktail scene that you’d like to see?
What the world needs is more PIE. Pie is a dish that can be enjoyed year-round. It is thought of around Thanksgiving, but it is so much more than that. Hot, cold, sweet, savory, there is a pie for every occasion.

Who is your St. Louis food crush?
Kevin & Mina Nashan of Peacemaker Lobster & Crab Co. and Sidney Street Cafe. They are my go-to.

Who’s the one person to watch right now in the St. Louis dining scene?
Lona Luo of Lona’s Lil Eats.

Which ingredient is most representative of your personality?
Cinnamon, because it is warm, but not overpowering.

If you weren’t working in the restaurant business, what would you be doing?
Practicing law. Prior to opening Dottie’s Flour Shop, I was an attorney. Now that I’m a pie-maker, people are much happier to see me!

Name an ingredient never allowed in your restaurant.
Artificial sweetener.

What is your after-work hangout?
My living room with my kids.

What’s your food or beverage guilty pleasure?
I’m a sucker for chocolate and pasta.

What would be your last meal on earth?
Tutto mare, fresh bread and a big slice of chocolate pie a la mode.