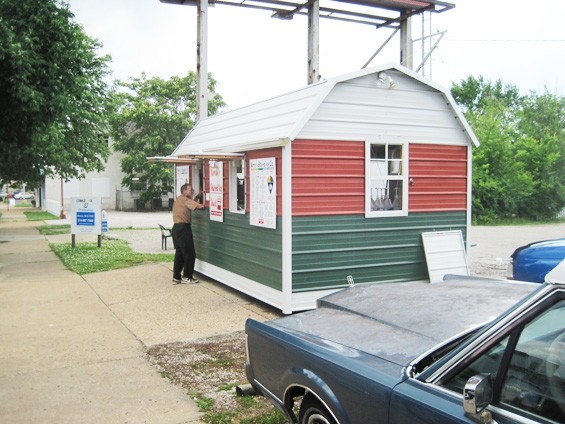 Dr. Freeze
Murray's Shaved Ice on Watson Road in Lindenwood Park
World Cup aficionados might be interested to learn that, as a youth, I was quite the footballer. My introduction to the game was not the schoolyard pitch, mind you -- and it certainly was not the "rec league" of today's overprivileged, overscheduled miniature adults.

Each year, the entire Freeze clan would gather at my grandfather's farm for a week's Bacchanalia, the highlight of which was undoubtedly when the paterfamilias himself, Hieronymus Freeze, would ritually slaughter one of his prize sows for the Grand Feast that marked the gathering's climax. An early proponent of "nose-to-tail" eating, my grandfather would inflate the pig's bladder, fill it with vanilla custard and then give it to his grandchildren for a game of eight-on-eight footie.

(There were actually seventeen Freeze grandchildren, but poor Aloysius had contracted polio while recovering from tuberculosis at a sanatorium and was, alas, relegated to the role of spectator. One year, someone had the idea of making him the referee, but due to the aforementioned bout with TB, his whistles were too feeble to be heard, let alone obeyed.)

I advanced quickly through the ranks of amateur football and might have enjoyed international fame as a professional were it not for the horrific accident that befell me when I tried out for Ajax Amsterdam.

In truth, the accident occurred not during training but shortly after my arrival in Amsterdam, as I was crossing the street. From around the corner, spinning so madly I thought I might have stumbled upon the famed Whirling Dervishes, one of the city's many cyclists clipped my knee, rupturing multiple ligaments and turning me to the greener -- though, yes, less lively and less lucrative -- pitch of the microscope and the snow cone.

(Did this careless cyclist have the hunched back and marked odor of ether reminiscent of a certain "Dr." Steeg, tender of amphibians and wrecker of families? He did indeed.)

Dr. Freeze
Dreamsicle is as close to pig's bladder as you can find at Murray's.
Dreams of the World Cup and what might have been filled my imagination as I arrived at Murray's Shaved Ice, a pretty little shed on Watson Road, just down the street far from one of my favorite haunts, Claudia's Pub. Naturally, then, I ordered a "Dreamsicle" snow cone.

You might anticipate my excitement that the word shaved is included in the stand's name. The ice, however, is not as finely shaved as I prefer. Still, this is no chunky monstrosity, and the Dreamsicle flavor is a beautiful marriage of orange and vanilla. Truly, the only better pairing for vanilla is a pig's bladder. Indeed, it is a minor miracle that we Freeze grandchildren always finished our football match before tearing open the "ball" to scoop out the delicious bladder-soaked custard.

Though I do not want to give you the wrong idea. We were well-mannered children. We always gave poor Aloysius the first bite.