It's a positively Homer Simpsonian concept with a Mr. Burns execution. Chef Zac Young of Flex Mussels in New York City and Top Chef: Just Desserts has been injecting doughnut holes with upscale booze. Of course, it's a hit. How could it not be? It's doughnuts and alcohol! But not everyone can afford handmade doughnuts infused with Maker's Mark and caramel. Or the trip to New York to buy them.

So why not visit your nearest Dunkin' Donuts, then pop by your local supermarket's liquor aisle and make your own?

You know the problem with apple-crumb doughnuts? Very little apple flavor, too many crumbs. Boost the apple to eXXXtreme and dam down the crumbs with Sour Apple Pucker and voilà -- Apple Crumb Donutini! 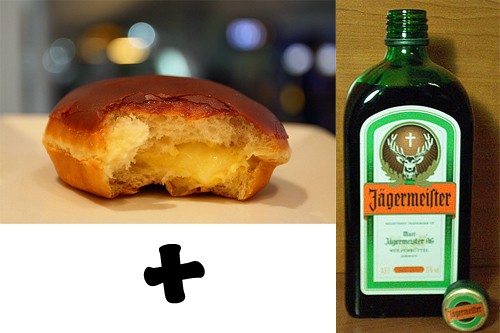 That "kreme" tends to congeal on the tongue, clammy and flavorless. What better way to honor this pastry's German roots than with an injection of Jägermeister? It's the perfect brunch for college bros everywhere! 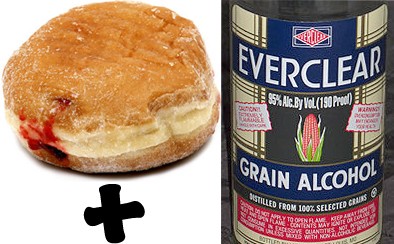 Until Dunkin' Donuts devises a way to put actual Jell-O in a doughnut, injecting Everclear into this pastry is as close as we'll get to a doughnut Jell-O shot.

For something that bears a French name, these babies suffer from some serious ennui in the style department. Where's the joie de vivre? The je ne sais quoi? A soak in blue-tinted will make it runway-ready in no time!

Old-Fashioned Donut, old-fashioned cocktail! Soak the dry pastry in McCormick whiskey, add a dash of bitters and a twist of lemon. It's a Don Draper Donut!