Earthbound Satellite Will Open This Thursday Inside Soulard's Preservation Hall

Stuart Keating, co-owner of Earthbound Beer, likes to joke that he and his partners Rebecca Schranz and Jeff Siddons have been in a constant state of building something ever since they opened their original Cherokee Street taproom in late 2014.

He isn't just talking about the massive renovation on their brand-new brewery, either, which (finally) opened this past September. The paint wasn't even dry on that project when he and the Earthbound team were tapped to take over the bar operations inside Soulard Preservation Hall this past March. That concept, Earthbound Satellite (1921 S. 9th Street), will open later this week.

"This is something different for us in the sense that we are used to creating something from nothing," Keating laughs. "This is the first time we have gone into an already existing place and [screwed] it all up."

Keating's joke comes as he and Earthbound Satellite's head bartender, Ryan Pier, are scrambling to put the finishing touches on the bar, which is slated to open to the public this Thursday. The small bar sits inside the retooled Soulard Preservation Hall, which is owned by Moonbase Market, a video and tabletop game forum and events space.

While Moonbase Market will continue to run the larger venue that hosts special events and its gaming clientele, Earthbound Satellite will take over the room that houses the building's bar. That space can hold around 35 patrons and consists of lofted ceilings, artwork by Earthbound co-owner Robin Johnson and an old wooden bar that has been outfitted with sci-fi influenced decor. Behind the bar, gold mylar lines the wall and gives the feeling of a campy futuristic movie set.

Described as a "dive bar in space," Earthbound Satellite is the brainchild of Pier, who has always wanted to do a cocktail program in the context of Earthbound, though the brewery's focus on beer never really afforded him the opportunity to do so.

For a small bar set inside a larger events space, Earthbound Satellite has high-concept ambitions. As Pier explains, he drew his inspiration from the Italian arts movement Futurism, which upended Italy's cocktail culture in the early 1900s. Relying heavily on amaro and vermouth, the movement was a rejection of classical cocktails in favor of the avant garde.

"Earthbound is always open to new ideas, and Stuart and I have a love affair with European liquors," explains Pier. "We agreed that we wanted this to be an educational bar with weird liquors and things to taste that people wouldn't normally taste in Soulard."

An example of the sort of cocktails to expect at Earthbound Satellite is the "Carthusian Coffee," a drink inspired by the Carthusian monks who make Chartreuse. The complex yet balanced flavors come from cafe amaro, whiskey, chartreuse, fernet, mint and lemon. However, in keeping with the spirit of Futurism, it might not be the same every time you taste it.

"Bartenders would write down their recipes, but erase the ratios so that each drink was an expression of the individual," Pier explains. "I am thinking about doing that here."

CHERYL BAEHR
Creatures from another planet decorate the bar.

Earthbound Satellite may have a cerebral element to it, but Keating, Pier and company are not taking themselves too seriously. Ideas abound, including the possibility of using an old Snoopy Sno-Cone machine to shave ice for drinks. Though that has not happened yet, they have acquired an old Jagermeister machine that they've already repurposed. It will be used to serve their clear Manhattans.

Pier hopes that the small, 35-seat bar with be a place for conversation and engagement between patrons. To that end, the bar has several games available to play while sipping on drinks. And because Earthbound Satellite sits just off the Moonbase Market side of the building, he expects crossover between the concepts.

"We're hoping for a chill, relaxed atmosphere," Pier explains. "Because it is smaller, the focus will be on having a conversation and not large quantities of people coming in."

Earthbound Satellite will open this Thursday at 5 p.m. Hours of operation have not been finalized, but will be updated on the bar's Facebook page, www.facebook.com/earthboundsatellite/. Click through for more photos of Earthbound Satellite.

CHERYL BAEHR
The "Carthusian Coffee" is named for the monks who make Chartreuse.

CHERYL BAEHR
Earthbound Beer is on tap, of course.

CHERYL BAEHR
Games are available for entertainment while drinking. 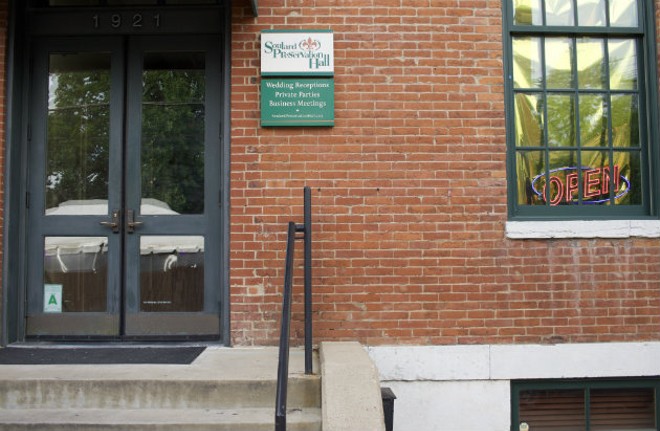