The St. Louis Southern-inflected eatery is the single honoree from Missouri 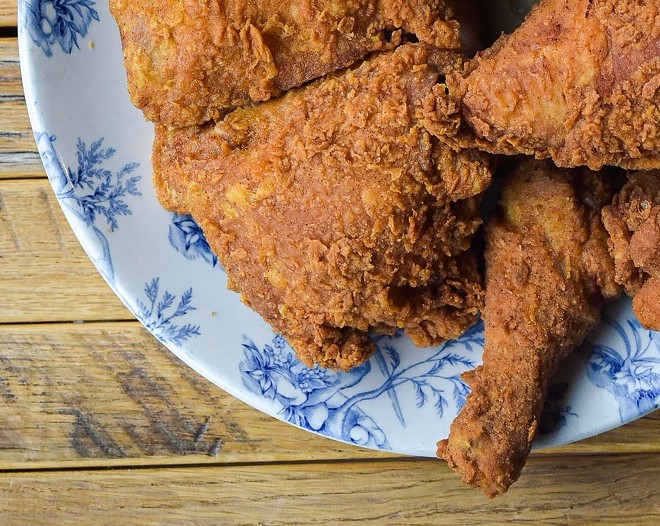 Even before the beloved Southern-inflected Juniper (4101 Laclede Avenue, 314-329-7696) opened its doors in 2013, fried chicken was its thing. It was the basis of one of owner John Perkins' earliest pop-up dinners, Le Coq, and it set the tone for the sort of restaurant he wanted to create when he served his first guests at Juniper's original location on North Boyle Avenue. For a brief moment, it was taken off the menu because of overexposure, then it came back by popular demand and made its way a few blocks down the road when Juniper moved to its current spot four years ago.

And Perkins wouldn't have it any other way.

"I love fried chicken; I've always loved fried chicken," Perkins says. "At times, I've had a hard time getting my chefs to love it as much as I do because it might not be as creatively fulfilling to them as something else, but I think there is a lot of heart and soul that goes into good fried chicken. We take it very seriously and have high standards. It's become entrenched in the culture of our restaurant, and we take pride in that and approach it with every bit of intention."

Now, nearly a decade into its run, Juniper's crispy bird is getting recognition beyond St. Louis, courtesy of  Eater. The prestigious online food publication recently named Juniper's fried chicken one of the best in America, placing it among 26 other notable restaurants that embody everything beautiful about what dunking a breaded bird in the deep fryer can be.

For Perkins, the award is validation — not just for Juniper's fried chicken, but for all that he and his team have worked so hard to achieve over the years.

"I think it defines who we are, to an extent, which has been the tension all along," Perkins says. "I always knew we had a crowd-pleaser in it, but there is a lot of other stuff we do really well, too. It's great getting this kind of recognition, but I don't want it to replace the other stuff we do. I don't mind having something the restaurant is known for, but it's then up to us once you get in the door to tell the whole story of what Juniper is about. To me, it points to the fact that we we do everything really well. If we do fried chicken this well, it probably means we do our pork really well, and our oysters and cocktails really well. I'm not worried about it pigeonholing us."

Juniper, which offers its signature dish as the centerpiece of its all-you-care-to-eat Sunday Suppers, was the only restaurant from Missouri to be named to Eater's "Best Fried Chicken in America" list, something that Perkins feels reflects the painstaking work he and his team have put into the pursuit of fried chicken perfection. He describes this as a never-ending quest and notes that, even if guests do not notice the subtle tweaks the kitchen team has made over the years, they are always looking for ways to make it better. Though he feels (and has heard from friends) that this version is the best they've ever put out, he knows that he will never stop trying to get better — which is why this honor feels so special.

"This is a big deal, probably one of the bigger single things we have gotten in terms of recognition and the company we are in," Perkins says. "I think it's validation and encouragement for the guys in the kitchen and is a pretty forceful reminder to take pride in what you do. It feels nice to get some recognition for that, because we've always put a lot of time and effort into making it high quality."