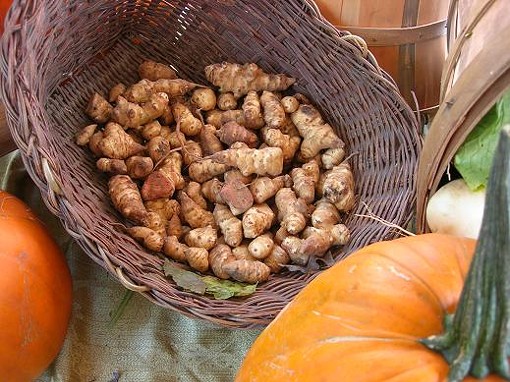 Alissa Nelson
A few years ago, local chefs started hopping on the sunchoke bandwagon. Suddenly you had sunchoke purées and soups and risottos popping up like mushrooms after a week of fall rain. This happened to correspond to my first farm-share experience. As it turns out, Biver Farms is quite the purveyor of sunchokes. Every week for about a month, I would find myself with about two pounds of the little guys. I got sunchoke fatigue, to be honest.

But like all things there is a season (turn, turn). The fall is prime root vegetable season in general, so it's no surprise that sunchokes have started working their way into the markets again. They're homely -- they look a lot like stubby little ginger roots -- and their irregular shapes can make them a pain to deal with. But bear with me here, since they're surprisingly versatile.

Some fun facts about sunchokes: They're also known as Jerusalem artichokes, but not because they have anything to do with the Holy Land or artichokes. I prefer "sunchoke" because they're actually the roots of a certain type of sunflower, found throughout the U.S. They're not the most beautiful flower (they're actually pretty spindly as far as sunflowers go), and if you fail to dig up the roots, they're basically a weed. But thanks to good old (probably Native) American ingenuity, we can eat them, and they're tasty.

Sunchokes are a good starch substitute for diabetics and those with elevated blood sugar in general. Since the sugars are stored as inulin instead of starch, they generate less of an insulin spike after eating. In other words, they have a low glycemic index. They're also a great source of potassium, iron, fiber, B vitamins, copper and phosphorus. Who knew?

But nothing ruins the fun of food more than pharmaceuticalizing it, so here's the straight dope: Sunchokes are delicious -- kind of nutty and crisp, like a less juicy jicama -- and they tolerate just about anything you can throw at them. Making a stir fry? Slice a few and throw them in the wok with a little soy sauce, garlic and ginger. Roasting a pan of fall vegetables? Cut them into chunks and throw them on in. Making a vegetable puree (à la mashed potatoes)? Boil them alongside your other veggies and have at it. It's nice to have vegetables that are so forgiving to your every culinary whim.