Sunday's Washington Post published a very long article on the epidemic that over the past couple of years has been devastating China's pig farms. (Registration required.) 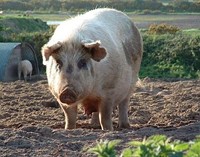 Chinese officials believe the epidemic is a respiratory and reproductive illness called blue ear disease. The government has already developed a vaccine for the disease, which appears not to be a threat to humans. However:

There are also concerns that the disease that is killing so many pigs may not even be blue ear disease after all or that a type of blue ear virus -- known as porcine reproductive and respiratory syndrome -- has mutated into a much more lethal form.

In the PLoS ONE paper, Chinese scientists describe a vicious pathogen that can decimate an entire pig population in three to five days. They say autopsies showed severe damage to multiple organs, including lungs, spleen and kidneys.

There is also concern about the Chinese government's methods for dealing with the epidemic as well as its willingness to talk about it.

Some experts, both inside and outside China, are skeptical, citing the government's handling of the avian flu outbreak in 2004 and SARS in 2002 and 2003. While China's central government has made numerous improvements since then in how it deals with infectious disease control and informs the public, it has once again been slow to share scientific data and tissue samples with other countries.

As a result, there is worry that while China is lagging, the virus is quickly turning into a global problem. China does not export pork to the United States, but the virus has already been found in pigs in China's southern neighbors, Vietnam and Burma.

The epidemic is having economic ramifications. The latest issue of the Economist looks at inflationary pressure in China.

Pork is the focus. At the end of August it was 70.3% more expensive than it was a year earlier in 36 large cities surveyed by the National Development and Reform Commission (NDRC), the economic-planning ministry.

Regular readers of my reviews know that, more than any other meat, pork has a special place in my heart. (Of course, that special place will probably lead to angioplasty, but that's a subject for another day.) And while the outbreak in China is no threat (yet) to our domestic pigs, the fact that such an epidemic can spread so quickly is pure nightmare fuel for anyone who worries about our food supply.