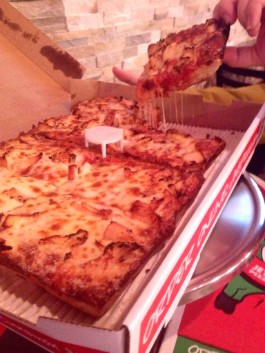 The St. Louis pizza scene has the thin crust covered, but a new addition is looking a little deeper into the market: Jet's Pizza (14940 Manchester Road, Ballwin; 636-220-8929) has set foot in Missouri with its first store in Ballwin.

Jet's, a national pizza chain with more than 275 locations nationwide and based out of Sterling Heights, Michigan, is known for its deep-dish square pizza, says general manager Nick Miller, adding that the restaurant makes its dough in-house everyday.

Product quality is also paramount to Jet's, which has been operating under the slogan "Life is short. Eat better pizza." since 1978.

"There are a lot of ways out there to make cheaper pizza," founder Eugene Jetts says on the company's website. "Jet's is about better pizza. That's why we have never skimped on the product or the ingredients, and never will. As soon as people get a slice of Jet's Pizza into their mouth they notice something different. They notice it's better."

In addition to the Ballwin location, the chain's next St. Louis outpost is Webster Groves, with future plans for Chesterfield and Creve Coeur on the horizon.

After a Gut Check sampling of Jet's Pizza, we dissected its menu and have some pointers for you, our readers.