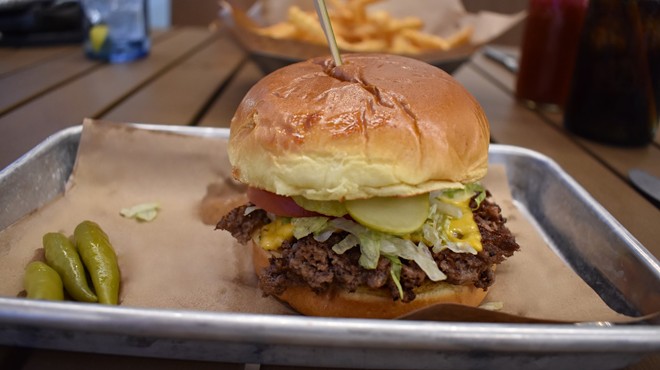 Located in the space formerly occupied by the Hard Rock Cafe, Soda Fountain is a kitschy, 1950s-style diner, complete with waitstaff outfitted in retro uniforms, an old-fashioned soda counter and a fully stocked candy shop. Upon stepping inside, you're immediately immersed in the colorful decor and odes to decades past. A cheery server in a powder-blue apron and Chuck Taylors leads you to a puffy monochromatic booth where, while you peruse the menu, songs like "Mr. Postman" by The Marvelettes blast in the background.

Although most customers will probably show up to the Soda Fountain looking for malts or giant milkshakes, the menu also offers more upscale takes on diner classics to balance the ice cream and candy on offer. The smash burger, for example, stacks perfectly cooked patties with American cheese, lettuce, pickles and tomatoes between a deliciously soft brioche bun. If burgers aren't your thing, you can choose from other menu items such as the six-cheese grilled delicacy, an authentic Chicago-style hot dog and fried chicken tenders for kids (or just the young at heart).

The main event, however, is undeniably the Freak Shakes: colossal, stacked, how-can-one-person-consume-this-much-food milkshakes that are both intimidating and mouthwatering. Freak Shakes are defined on Soda Fountain's menu as "1. noun. A very unusual and unexpected improvement to your everyday milkshake. 2. verb. The dance you’ll do when this thing arrives at your table."

These massive desserts definitely deliver on that promise: The "A Very Happy Un-Birthday," for example, attempts to stuff the entire contents of a birthday party — including a vanilla-frosted rim with rainbow sprinkles topped with
a Funfetti cupcake, whipped cream, rainbow sprinkles, a snickerdoodle cookie, cherrie and a rainbow candy pop — into a single glass, and it’s absolutely delicious. If you order one of these, make sure you come with a friend or two to help you finish the job. 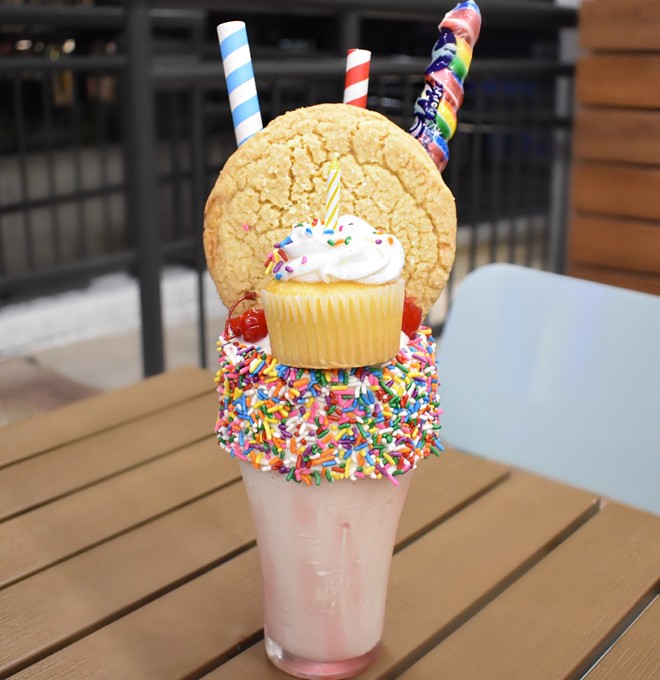 Soda Fountain is the first new restaurant to open at Union Station in many years, but it isn’t arriving alone — it's one of three concepts opening at the St. Louis institution as part of its revival. Along with Soda Fountain, a railway-themed cocktail bar, the Train Shed, and an aquatic-themed cafe to complement the forthcoming St. Louis Aquarium are also in the works. All three concepts are being developed and will be managed by St. Louis-based Lodging Hospitality Management.

Additionally, the highly anticipated St. Louis Wheel is finally open to the public as well, as is mini golf, a carousel and a slew of other family-friendly attractions. For any St. Louis local, watching Union Station slowly come alive after sitting empty for quite a few years is an exciting thing.

Russel Cunningham, executive chef at Union Station, worked with a team to research and design the concept and menu behind the Soda Fountain. Cunningham believes that the restaurant, along with the rest of the new spaces planned for Union Station, will bring a whole new crowd, both locals and tourists, to the historic St. Louis space.

“Just location-wise, where Union Station is at, we're downtown, and close to the Enterprise Center where the Blues play," Cunningham says. "We're right in the middle of everything. And of course, the new Union Station is all family attractions. If tourists check into the 600-room [at the Union Station] hotel, they'd never even have to leave the property for the weekend. It's going to be huge for downtown."

The new restaurants also include nods to the rich history of Union Station, specifically the role it played in the Louisiana Purchase Exposition, more commonly known as the 1904 St. Louis World’s Fair. Sipping a milkshake at Soda Fountain while staring out at the towering St. Louis Wheel, it’s hard not to feel like you're seeing St. Louis history come full circle.

"All of the old, retro spaces that used to be here, our team is going back to that by playing into the history of Union Station," Cunningham says. "This place really was a Gateway to the West, and the train station was the hub where everyone met.”

It looks like the new and revived Union Station might be exactly what downtown St. Louis needs — an exciting large space where families and friends alike can gather together, grab a meal and have fun. Soda Fountain’s first night drew a huge crowd of all ages, and it’s the first time in years that Union Station has felt like the hip place to be.