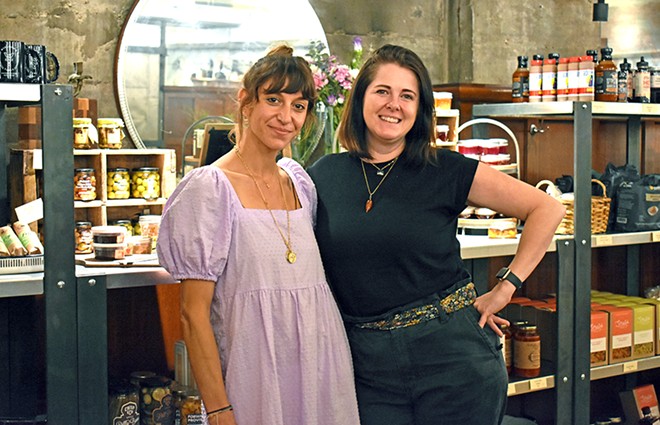 The bustle of staff, a crowd of to-be diners chatting softly among themselves and shifting around as they eagerly await their orders, bakery cases filled with temptations, and sugary, perfumed air greets visitors at the door of Winslow’s Table Market & Bakery. But take a right before the cashier, go through the doorway and descend a staircase into the historic building’s basement, and a different but complementary space opens up.

Here, in The Cellar Shop at Winslow’s Table (7213 Delmar Boulevard, 314-725-7559, winslowstable.com/cellarshop), the sounds of the breakfast and brunch spot fade into a soft patter, and the scents of the bakery become a sweet, French-toast-like hint. Wine, artisan foods such as honey, candles, home and self-care goods, jewelry and more wink gem-like from the shelves and displays that line the walls and dot the floors throughout the small cellar.

Everything seems appealing in the cool, wood-panel-lined space.

“It's quiet and peaceful and enjoyable to be down here, and you can really concentrate on what's going on around you and feel that heartbeat that's going on upstairs,” says Kara Flaherty, the beverage and retail director for Take Root Hospitality, which encompasses not only Winslow’s Table and the cellar but also Vicia and the soon-to-be Taqueria Morita and Bar Les Freres.

That space didn’t work out, but it wasn’t too much longer before they realized there was gold beneath their feet in the form of the mostly unused private event room.

They ordered the shelves, which arrived on a Thursday, and opened shop the following Saturday. It’s been a little more than a month since that April 16 opening, and the reception from the community has been positive, with customers starting to get in the habit of grabbing a coffee and breakfast, then browsing the shop.

Flaherty — who runs the space alongside Mia Kannapell — says the idea is for the cellar’s goods to fit within Take Root’s farm-to-table ethos, and to pay homage to the general store history of Winslow’s Home, the Winslow’s Table predecessor.


“We try to carry a lot of, you know, local things mixed in with our favorite things from favorite places,” she says, pointing out more than a few picks from around the room.

There’s also a candle display that includes offerings such as the Kansas City-area Messner Bee Farms products and the vegetal-scented Glow candles. That’s not to mention the self-care section (including a dog wash), hand-crafted goods and a rotating wine selection. 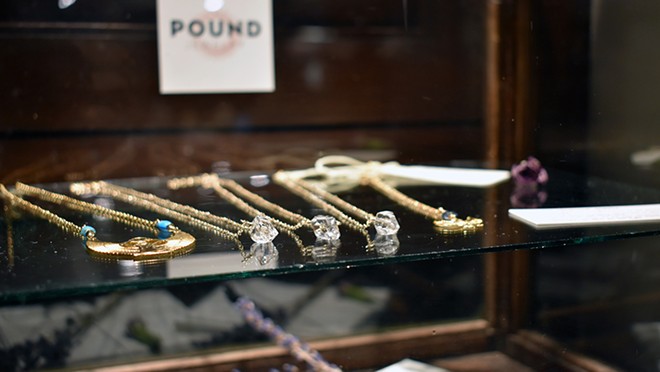 Jessica Rogen
Winslow's Cellar also sells a selection from POUND Jewelry.
“The main idea for me, what I really want people to think about when they think of the shop is like this perfect place to get a gift for yourself or for somebody else,” she says, noting they also offer a $50 monthly mystery basket.

Already the cellar is complementing the preexisting programming. Flaherty points to the regular Farmers Market Thursday Night events, a market that features produce from Winslow’s Farm and Loving Roots Urban Farm, and now includes a wine and product tasting from 4 to 6 p.m. Down the line, Flaherty hopes to add on to that through classes on wine pairings, curating cheese boards and entertaining, as well as pop-up shops for local vendors similar to ones that they already do with POUND Jewelry.