Putting the smoker on a trailer out in front of the restaurant was totally a strategic move. Matt Stiffelman and Tim Zolman's new barbecue joint, Vernon's (6707 Vernon Avenue, University City; 314-726-1227), lures customers with the scent of slowly smoking pork, beef and chicken that encircles the building and wafts down the streets of the surrounding neighborhood.

"That was intentional," Stiffelman confirms. "This company makes a lot of trailers, but this is the showy one." 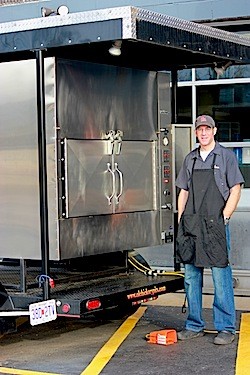 Vernon's opened this past November 28, but the concept and recipes were years in the making. Stiffelman and Zolman had worked at Super Smokers BBQ together, and they'd always talked about opening their own restaurant someday. Stiffelman went on to spend nine years as an area manager for Ben & Jerry's, which he says helped him learn the ins and outs of running a business.

Vernon's recipes are a compilation of techniques and flavor combinations Stiffelman and Zolman have encountered all over the nation. Stiffelman in particular was influenced by places like Arthur Bryant's in Kansas City, Angelo's in Ft. Worth and Jack's Bar-B-Que in Nashville. The two also spent years trying out new recipes in barbecue competitions around the Midwest.

"The recipes come from different flavors of food I've had, places I've traveled and things I want but can't get here," says Stiffelman. The ribs, for example, are marinated in puréed jalapenos and pineapple to achieve a Hawaiian flavor. The partners offer five different sauces, from sweet to tangy to smoky to spicy, all of them, like everything else at Vernon's, house-made.