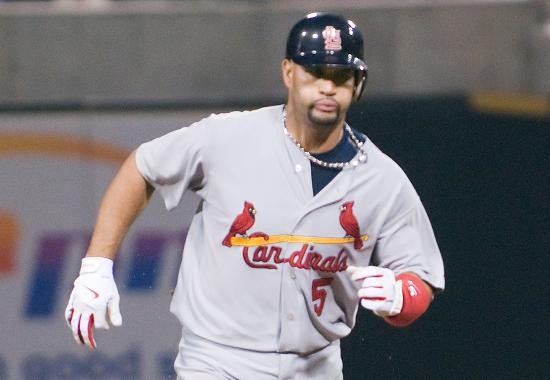 Image via
Albert Pujols might be running out on us, but Pujols 5 could still survive!
Of course, the big news in St. Louis this week was that the Cardinals and Albert Pujols couldn't come to terms on a new contract before El Hombre's spring training deadline. As you might have heard, the slugger's restaurant, Pujols 5 Westport Grill (342 Westport Plaza, Maryland Heights; 314-439-0505), had champagne on ice to celebrate the deal that wasn't to be.

While Gut Check remains optimistic that Pujols and the Cards aren't headed for a divorce, we think the folks at Pujols 5 need to be prepared for the worst-case scenario. Thus, after the jump, our suggestions for 10 new concepts that could replace the restaurant.

Skip's Scrappy Yard: Skip Schumaker, David Eckstein and Aaron Miles are the Manny, Moe and Jack of the scrapyard biz. Come tour their spacious showroom of stuff that people threw to the curb without a second thought.

Ryan Franklin's Kill 'n' Grill: The Cardinals' hurler gives diners a unique experience. Every item on the menu is shot, dressed, cooked and plated by Franklin himself.

Pujols 5Mobile: Citizens of [enter city in which Pujols now lives]! Not only has your beloved [team to be determined] signed the greatest player of this generation, but now you can find his namesake restaurant on a street corner near you!*

Sam Bradford Is Your Golden God Now Bar & Grill: Enjoy the favorite foods of your favorite quarterback while you gaze upon the trophies his rocket arm will garner him and the Rams...at least until his contract is up, and he signs with the New England Patriots for, like, $200 gazillion dollars.

* - Sorry, Cubs fans. Food trucks not yet allowed in Chicago. You lose again.