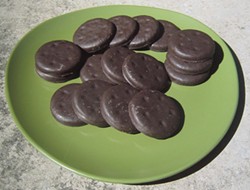 Image via
Thin Mints: So delicious. So tempting.
Oh, Girl Scout Cookie season. A time for friendly arguments over which cookie is supreme* and whether Thin Mints are best at room temperature or frozen.** A time for impulse purchases from your neighbor's daughter and mandatory purchases from your boss' kid. A time to beat the living crap out of your roommate over a box of Thin Mints.

The brawl began when the 31-year-old cookie monster confronted her sleeping roommate and accused her of eating the box of treats. The roommate told Howard she'd given the cookies to Howard's kids who were awake and hungry around 1 a.m.

The roommate offered to pay $10 for the cookies, but Howard wasn't having it, and began fighting with the other woman.