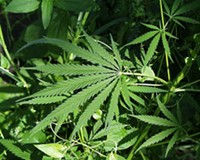 In a story seemingly tailor-made for the Jay Leno-brand of late-night humor, Edward and Juli Pilla have been busted for growing marijuana -- lots and lots of marijuana -- inside their Warrenton home. According to a KSDK report, "The processed marijuana had an estimated street value of over $30,000." You can view a slideshow of the bust at KSDK. A Suburban Journals report adds the following:

Image Via
Presumably, if Edward and Juli Pilla got the munchies, they could dip into their other supply, their Spudmaster ColossalChips.
Why report this here at Gut Check? Because Edward Pilla is the founder and owner of Bellflower, Missouri-based Spudmaster ColossalChips, available at many local stores. Thus making this one of the best (alleged) examples of a company controlling both demand and supply that I've encountered.