For John Rodriguez, Hacienda Is His Heritage — and His Destiny 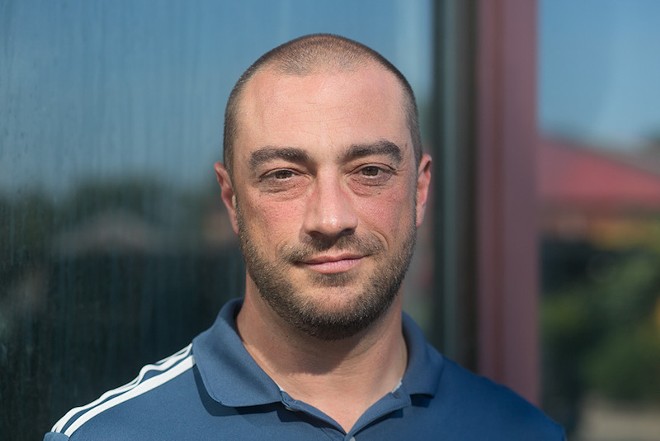 Though John Rodriguez insists on downplaying his role in the story of Hacienda Mexican Restaurant (9748 Manchester Road, Rock Hill; 314-962-7100), there is no question the landmark eatery is a part of him — and he a part of it.

"I think my handprints are in the concrete. Literally," Rodriguez laughs, thinking back on the childhood he spent at the restaurant owned by his parents. "When we were young, my sister and I were all over the dining room. We are open 720 shifts a year, from six a.m. until 1 a.m. Our parents were always there, so we got used to being up there. We'd come to work with mom and dad, and they would give us our toys to keep us busy."

Running Hacienda was perhaps Rodriguez's destiny. His father, Norberto, immigrated to the United States from Mexico with only a few dollars in his pocket and no education, then worked his way up in the restaurant business, opening his first place in 1963. Though it was an American concept, the elder Rodriguez began peppering the menu with Mexican specialities. Buoyed by their reception, he decided the city was ready for a bona fide Mexican restaurant. He opened Hacienda in Overland in 1968, moving it to its current digs on Manchester nine years later.

There was no escaping the business for his son — not that he wanted to. As soon as John and his sister, Alex Rodriguez de Torres, were old enough, their father put them to work doing inventory, hostessing and helping out around the place — and they loved it.

However, when the time came to pursue their own paths, neither sibling went into the restaurant business. It's not that their parents dissuaded them from doing so; they simply wanted the children to forge their own paths and have the experience of going to college because it was something they did not have themselves.

For Rodriguez, that path led to Berklee College of Music in Boston where he pursued his lifelong passion for music. After graduating the prestigious program, he moved to Los Angeles where he worked in his chosen profession for nearly a decade. He engineered tracks, wrote and produced songs for films, television, video games and commercials, living his dream until reality began to sink in.

"I was scraping out a living in L.A., but I started to rethink it," Rodriguez explains. "I was getting older and didn't see a stable future out there. At the same time, we had needs at the restaurant, and my parents really wanted ownership presence there. I was looking for a change and they needed the help."

A sense of obligation brought both Rodriguez and his sister back to St. Louis to take over restaurant operations. Rodriguez insists he did so not with a heavy heart, but with passion for preserving his family's legacy.

"I feel like a caretaker of the place; it's always going to be my dad's legacy because this was his life's work," says Rodriguez. "I'd never want myself to be identified with it. I could never earn that because it's all my dad. I may be taking it and growing it, but I will never say it's mine. I just feel good taking care of it."

Rodriguez took a break from planning the festivities surrounding Hacienda's 50th anniversary to share his thoughts on the St. Louis food-and-beverage scene, his secret love of the freezer aisle and why you will never see mass-produced chips in his restaurant.

What is one thing people don’t know about you that you wish they did?
I don’t cook at the restaurant, but I cook at home almost every day.

What daily ritual is non-negotiable for you?
Listening to podcasts.

If you could have any superpower, what would it be?
To be able to see every corner of the restaurant at once.

What is the most positive thing in food, wine or cocktails that you’ve noticed in St. Louis over the past year?
I’m a big fan of ramen, so it’s nice to see that category growing.

What is something missing in the local food, wine or cocktail scene that you’d like to see?
More places where my wife and I can both get the breakfast that we want.

Who is your St. Louis food crush?
Quincy Street Bistro. It’s probably the only place other than Hacienda or Mayana that I could go every week.

Which ingredient is most representative of your personality?
Any good cut of beef.

If you weren’t working in the restaurant business, what would you be doing?
I’d probably still be kicking around the music business.

What is your after-work hangout?
Home.

What’s your food or beverage guilty pleasure?
Anything from the freezer aisle.

What would be your last meal on earth?
Ribeye steak and baked potato.