For Peno's Pepe Kehm, Calabrian Food Is All About Soul 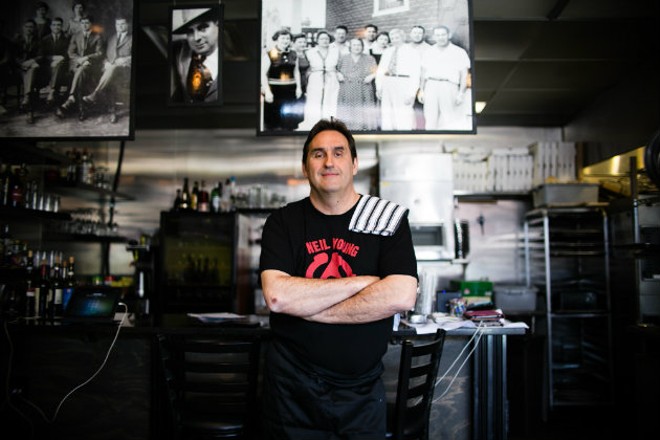 Pepe Kehm likes to say that he has the restaurant business in his DNA, a trait he traces back to his great-grandmother who immigrated to St. Louis from the Italian region of Calabria in the early 1900s. All ten of her children ended up in either entertainment or the restaurant business, so Kehm believes he was destined for such a life. However, it was the time he spent with his mom that really sealed his fate.

"My fondest memories are of being able to cook with my mom," Kehm recalls. "I was the youngest, so I was always with her. My sisters would set the table and do the dishes, but I was the one always cooking with her. We were making my grandmother's recipes that weren't written down — simple Calabrian food."

Though the chef and owner of Peno Soul Food (7600 Wydown Boulevard, Clayton; 314-899-9699) showed an early knack for cooking, his parents were not so keen on him making a career in the grueling restaurant business. It didn't keep Kehm from working at restaurants while he was growing up, but it made him think twice about them as a career, especially since his other passion, sports, captured most of his attention.

Kehm was a standout athlete who showed promise on the field. However, after sustaining an injury while playing soccer in college, Kehm was forced to face the reality that he needed to find a new path. The restaurant business, it seemed, offered him the best alternative.

"It was like The Godfather movie — it kept sucking me back in," Kehm laughs.

Kehm's big break came when he was waiting at an upscale hotel restaurant called Pepi's Restaurant & Bar in Vail, Colorado. Through one of his co-workers, he met a chef from Brittany and begged his way into cooking for him at his restaurant in the north of France. It was an eye-opener for Kehm, who soaked up everything he could learn about cooking and kitchen life both in Brittany and at another restaurant in Paris.

Kehm returned to the U.S. a more seasoned cook, this time landing in Scottsdale, Arizona, where he got the opportunity to learn about traditional Tuscan-style cuisine from an accomplished Italian chef. Now armed with a background in both French and Italian cooking, he left Scottsdale to do some consulting in Chicago, but he admits that personal struggles made it a tough time in his life.

"I've always been able to see opportunities where I can be useful, but then the chemicals got in the way," Kehm explains. "I had to get straight, sane and sober to be able to focus on life. This business can suck you under so quickly — I've seen it happen to a lot of people. Luckily, I was able to get my head together and get to a place where I could be here without being loaded."

With a clear head, Kehm returned to St. Louis focused on opening his own businesses. First came Corky's, a mid-level steakhouse in Dogtown, followed by Spaghetteria Mama Mia and then Felix's. Though all three restaurants were located in the same neighborhood, running three places at the same time was a difficult undertaking that did not last long. Eventually, Kehm sold Corky's and Felix's and lost his lease for Spaghetteria Mama Mia. Though he re-opened the latter in the Grove, it would be short-lived.

A determined restaurateur, Kehm opened a restaurant called Arrows on Main Street in St. Charles with the purpose of building it up to sell it. With that success under his belt, he began working with a longtime friend at Michael's Bar & Grill while he sketched out his next move.

He'd figure it out as soon as he came upon the vacant storefront that formerly housed the fast-casual pizzeria Pizzino (and before that, Z Pizza) in Clayton's Wydown neighborhood. Kehm had always been attracted to that part of town because of its neighborhood feel and saw a chance to finally bring to life the restaurant he was meant to open: a soulful homage to the Calabrian cuisine of his roots.

That restaurant, Peno, opened in 2016, redefining Italian cuisine to a city used to red sauce and Provel. As Kehm explains, Calabria is one of the poorest regions in Italy, a reality that results in its reliance on off-cuts of meat and simple techniques. (Its proximity to the coasts also makes seafood a popular ingredient.) He calls this style of cooking "Italian Soul Food," meaning simple ingredients and non-flashy techniques. In reality, however, the restaurant's heart and soul is the food he cooked with his mother — and what generations of his family cooked before them — making it his most personal restaurant to date (the late Kim Tucci was a cousin, and Kehm is dedicating this interview to the Pasta House co-founder).

"This place is a reflection of me and my mom, to tell you the truth," Kehm explains. "This is a personal thing. There are a few dishes from other people, but most of what we do is the traditional stuff we did together — and it's still true to what they do in Calabria. It's not made up. It's real."

Kehm took a break from the kitchen to share his thoughts on the St. Louis restaurant scene, the one ingredient you'll never find in his kitchen, and why he would still choose his mom's food over just about anything.

What is one thing people don’t know about you that you wish they did?
That I am compassionate and caring.

What daily ritual is non-negotiable for you?
Some form of meditation.

If you could have any superpower, what would it be?
I'd be Spaghettipepe and wield the power of good carbs.

What is the most positive thing in food, wine or cocktails that you’ve noticed in St. Louis over the past year?
National media attention.

What is something missing in the local food, wine or cocktail scene that you’d like to see?
Less press nepotism.

Who is your St. Louis food crush?
The wings from Michael's Bar & Grill.

Who’s the one person to watch right now in the St. Louis dining scene?
Mike Risk of the Clover and the Bee.

Which ingredient is most representative of your personality?
Agrodolce — sweet and sour.

If you weren’t working in the restaurant business, what would you be doing?
Music or film.

What is your after-work hangout?
At home with my animals.

What would be your last meal on earth?
Any dish my mom cooks.