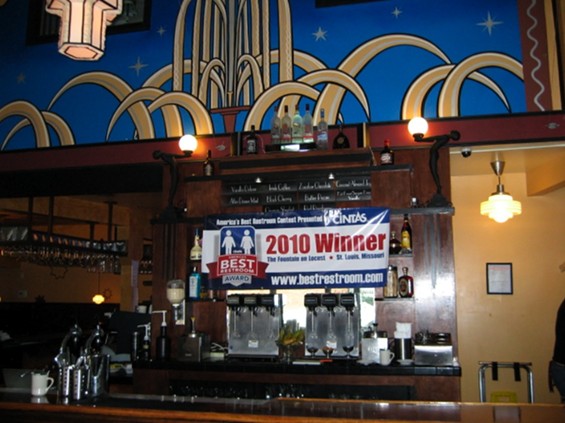 Kase Wickman
Victory at last!
Now there's even more incentive to visit the little girls' room at the Fountain on Locust (3037 Locust St., 314-535-7800): Before, you were just utilizing one of the top ten restrooms in America. As of this morning, that porcelain (er, black plastic) throne you're sitting on has been crowned the best restroom in America.
Owner Joy Christensen spoke to Gut Check today, giddy with victory. She found out her art deco bathrooms had won last week, she said, but wasn't allowed to tell anyone until the press conference announcing the victory this morning.
"On the one hand, my heart is just bursting with now nice it all is, and how the St. Louisians really made it happen for us," she said. "On the other hand, it's such a goofy thing."
"We'd love to be top in the country for our ice cream or our soup, which we certainly think is the best, but, well, you know. This is still good," she said.
Christensen said that when the contest's top brass arrived last night, "they were like, well, what kind of neighborhood is this?" She said they probably expected one of the other high-budget restrooms in the contest to win.
Though she couldn't weasel how many votes the Fountain had actually won by, Christensen said that the Fountain and the Grand America Hotel in Salt Lake City, Utah, had leapfrogged each other for the top slot throughout the contest. (The Grand America's description on the contest site: "This AAA Five Diamond Award-winning hotel features Italian Carerra marble, Barovier, Tosso & Moscatelli Chandeliers crafted from bronze and crystal, floor to ceiling commodes, beautifully inlaid African Anegre Wood and hand-painted walls.") Christensen said that she imagined contest officials had a site like the Grand America "more in mind" as a winner, but local voters ultimately pulled the Fountain to the top.
"This just goes to show that a no-budget recycled bathroom can win over a professional, big-budget corporate installation job. We furnished these bathrooms with stuff from the Habitat for Humanity store!" said Christensen.
When the Fountain was nominated for the award, Christensen said that she wanted to use it as a marketing tactic, some kind of slogan to generate publicity. Now, however, she says she can't think of any appropriate puns.
"I mean, what am I going to do, put up a 'We're number one for number one' banner?"
When Gut Check humbly suggested that "Number one for number two" may be a better catchphrase, Christensen was aghast.
"No! That's something you do at your house, not at my restaurant!"