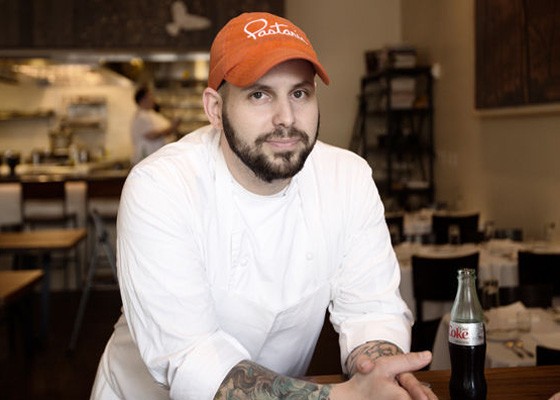 The acclaimed chef and head of Niche Restaurant Group (whose properties include Niche, Taste, Brasserie and Pastaria) was named Best Chef Midwest by the James Beard Foundation at its annual awards gala tonight in Chicago. This was Craft's sixth nomination and first win.

He has been jokingly referred to as the "Susan Lucci of the James Beard Awards," which gives some idea of just how long the recognition has been in coming. Speak with Craft, and he will say that it's an honor just to be nominated, and that the field is filled with great talent. But there's no question that he was long overdue to win.

So why did it take so long for the foundation to recognize Craft? I'd argue that Craft has had a problem with optics.

A Washington, D.C., native, Craft admits he selected St. Louis more than a decade ago, sight unseen, as the focus of his culinary ambitions after searching the Internet for cheap places to open a restaurant. Detractors view this with suspicion, arguing that he couldn't have cared less where he landed so long as it gave him the opportunity to be a big fish in a small pond. It's a critique that perhaps points to, though does not fully capture, the heart of the matter: the perception that Craft comes to the kitchen from a position of privilege.

There's no denying the chef was born into money, with family ties to the great Ford Modeling Agency (his grandmother was Eileen Ford). Some, though they won't admit it publicly, have used this fact to create a narrative: Craft did not have to struggle to get where he is today, they whisper, but was instead a spoiled rich kid born on third base. And in choosing a small market to dominate, Craft had an easy route into the restaurant business.

But such chatter is patently unfair. Regardless of his starting position, Craft took a big leap coming to a new town and starting from scratch. And even beyond that, he could have arrived with an elitist East Coast chip on his shoulder, insisting he was here to teach a bunch of good ol' Midwesterners how it's done. Instead, he immersed himself in the city and her environs, becoming an advocate for the region's bounty and working his tail off to create a mini-empire in the process. He's taken the time to get to know every inch of this region and has become an earnest champion of his adopted city -- arguably in a way that only an emigre can be.

That's become even more true in the last year, as Craft has transitioned Niche into a hyper-local establishment that defines what it means to cook and eat in Missouri. Just about everything this restaurant now serves comes from within 300 miles of St. Louis. That's unprecedented -- and impressive.

So forget how he got here. What's important is what he has done since. And that work holds up to the highest of standards, without question.

It's fitting, I think, that in the year that Craft fully committed to celebrating the region on his menu, the nation's culinary powers-that-be gave him one of their biggest honors. Yes, St. Louis is a small pond. But Craft has shown us all just how big a fish a chef can become by exploring Missouri's bounty. And that's something we can all be proud of.