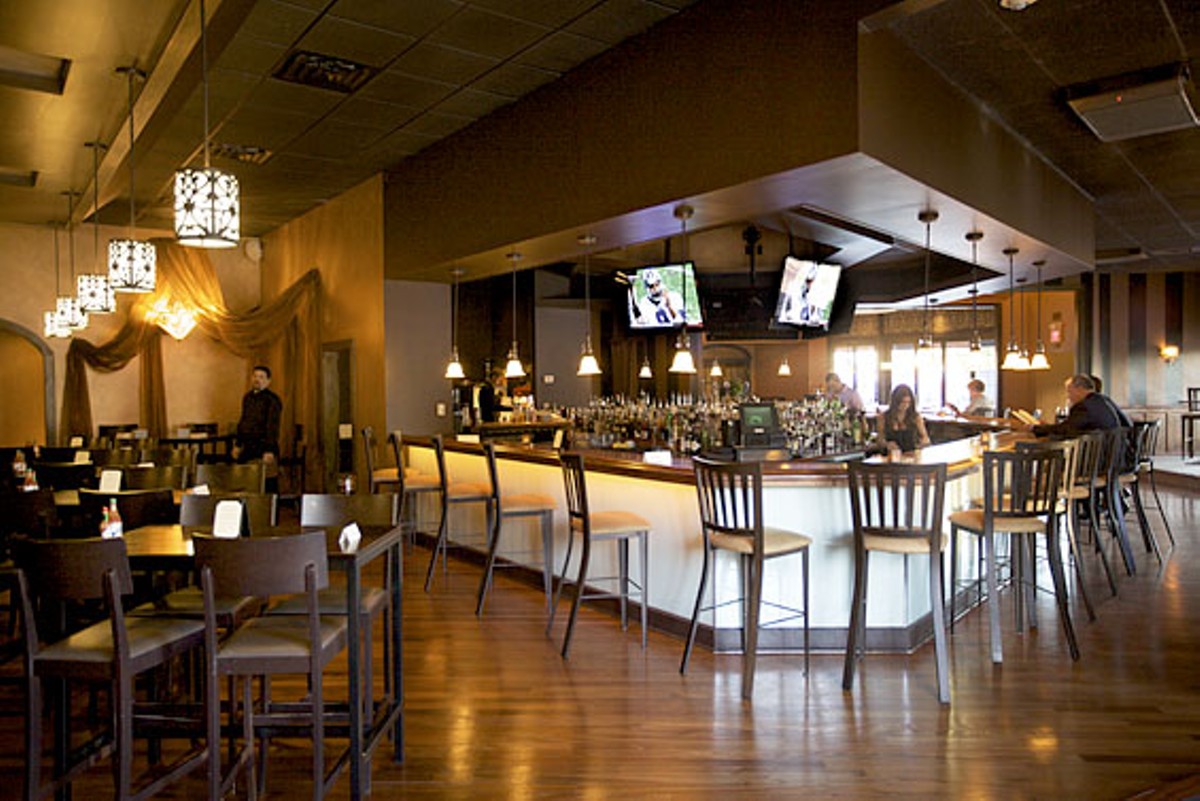 Since Monarch opened in 2003, through the tenures of its original executive chef, Brian Hale, and his successor, Josh Galliano, the Maplewood restaurant has greeted diners with two or even three different faces. There is the main dining room, of course, where the menu aspires to be -- and often is -- among the area’s best. In 2009, in fact, I named Monarch the second-most important restaurant to open in St. Louis last decade.

But the dining room proper accounts for less than half of the restaurant's footprint. There is also the bistro dining room and the bar. Each is a self-contained space, yet over the first seven years of Monarch's life, each struggled to establish a separate identity. The more casual bar menu (small plates, flatbreads and the like) the two spaces shared never felt right in the bistro, while the bar's deep wine list and position at the local vanguard of the mixology movement couldn't overcome its impersonal hangarlike size. By the time I reviewed Galliano's work at Monarch ("Josh Almighty," January 22, 2009), the bistro was no longer in everyday use, and the bar doubled as a second dining room.

When owners Aaron Teitelbaum and Jeff Orbin announced earlier this year that the restaurant would close for several weeks of renovations, I wasn't surprised to learn that the bar and the bistro would be the focus of the makeover. Specifically, Galliano — a Louisiana native — planned to transform the bistro and bar menu into a Southern Bistro concept.

(The dining room changed its seating arrangement and updated its décor, but the menu approach remains essentially unchanged from my previous review. This week's column addresses only the Southern Bistro menu. Patrons can order dishes from the dining-room menu in both the bar and the bistro.)

The basic layout of the bistro and the bar remains the same. The main entrance feels more open now, flowing naturally into the bar on one side and the bistro on the other. If anything, the changes have made the dining room even more secluded. If you walked into Monarch for the first time knowing nothing about it, you could easily assume the bar and bistro constituted the entire restaurant.

Which would be a shame. Because while Galliano is without doubt one of St. Louis' brightest culinary stars, and while many of his Southern Bistro dishes are quite good, the revamped bar and bistro still don't work together as a coherent restaurant or as an organic extension of what has made Monarch a vital part of our restaurant scene for the better part of a decade.

Obligatory disclaimer: Galliano has thoroughly busted me as an anonymous critic. I managed to avoid him on my first visit for this review (I think), but not my second. Also, back when Galliano was the executive chef at An American Place, my wife and I hired that restaurant's catering service for our wedding.

About half the menu is devoted to "Snacks," small plates and po' boy sandwiches. These can be fun. "Crawfish Bread" is like an upscale Hot Pocket, with a blend of crawfish étouffée and cheese baked inside a thin shell of dough. The "miniature" Natchitoches meat pies are actually quite plump with a spicy ground-beef mixture. The "Surf n' Turf" po' boy overflows with tender, shredded roast beef and crisp fried shrimp. It's a knife-and-fork sandwich. A "special" sauce and horseradish ketchup give it extra savor and a mild kick. (In a move that is either cute or a cost saver — or both — the po' boys are served with a bag of Old Vienna potato chips on the side.)

Yet after a while these small dishes tend to run together. Which crunchy appetizer do you want: the popcorn shrimp or the boudin balls? I opted for the latter, nuggets of the traditional Cajun pork-rice sausage coated with panko bread crumbs and then fried. The result is a crisp exterior that gives way to a soft interior with a disappointingly subdued flavor. Evidence of pork, let alone a Cajun influence, is scant.

Only one of the small dishes sported the grace note St. Louisans have come to expect from Galliano's cooking. At first glance the hush puppies are conventional cornmeal fritters, with jalapeño providing a touch of heat. Yet Galliano adds a little bacalao (salt cod) to give it a subtle funk and then, crucially, serves the hush puppies in a burnt-lemon sauce. This is wonderfully complex: tart, toasty-sweet, with a lingering, mouth-filling richness.

Entrées include one of the better catfish dishes I've had, a playful Southern take on the great Daniel Boulud's sea bass wrapped in thin slices of potato. Here the fish is wrapped in shredded sweet potato and then sautéed. The browned potato adds depth of flavor to the mild fish and also keeps its flesh tender. Served in a sage beurre blanc with roasted mushrooms and braised red cabbage, it's the sort of dish I'd expect to find on Galliano's dining-room menu: a classic, elevated by his personal touch.

The Creole-spiced butcher (or hanger) steak — a naturally flavorful cut of meat served over mashed potatoes — might be the menu's most bistro-esque dish. The Creole spicing is gentle. What makes the dish work is the marchand de vin. The brightly flavored sauce, made here with Tasso ham, cuts through the steak's richness and adds flair to an otherwise straightforward preparation.

Given Galliano's talent and background, his shrimp and grits are a disappointment. It's a technically well-made dish, with tender shrimp, unctuous cheddar cheese grits and a bourbon and leek sauce, but no one flavor is assertive. It needs a dash of...something. Gnocchi and roasted mushrooms in an herb velouté was confoundingly awful. The scallion-ricotta gnocchi simply dissipated on the palate, and the sauce was woefully underseasoned and an unappealing color. You can add guanciale to this, and you should: The cured pork jowl was the dish's only saving grace.

Too much of the Southern Bistro experience is dependent on an impossible-to-chart intersection of specific dish, specific day and specific seat. In the bistro, with, say, the hush puppies followed by the catfish, you get what the Monarch team is aiming for. Yet sitting in the bar — literally at the bar or at one of its many dining tables — on a Saturday night, with patrons smoking and cheering the Blues or beseeching a bartender to switch one of the TV monitors (a new addition) to a certain college football game, you might wonder if you wandered into a sports bar by mistake.

The renovations have made clear that the bar and bistro are no longer Monarch as we knew it. Precisely what they've become remains unclear.

St. Louis Standards: Ted Drewes Has Been a Legend for 93 Years