The restaurant will continue its Filipino food tradition with a "Hawaiian flair," says former owner 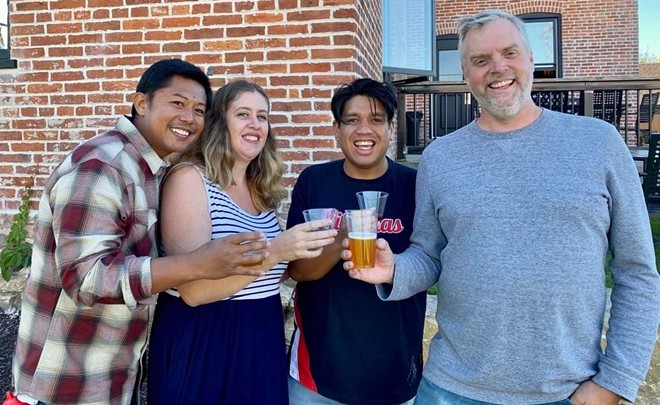 Joel Crespo and Brian Hardesty, who owned the business for 11 years and oversaw its journey from one of the city’s most beloved food trucks to a St. Louis staple for Filipino food, announced on Friday that they have sold the Guerilla Street Food brand.

Their business will belong to new owners, Rachel and Arnold Alcantara. The couple plans to open the restaurant in a new location, with an official announcement coming after they finalize lease negotiations.

The couple will take over the business as they settle down in St. Louis after their move from Hawaii. Arnold, who was born and raised in Hawaii, has worked in the restaurant business for over a decade with experience as a chef. The couple plans to continue Guerilla Street Food classics like the Flying Pig and Chicken Adobo while adding their own touch.

“They seemed like a really good fit to continue on Guerilla Street Food," Hardesty says, "to continue doing Filipino-American food but also add a little bit of Hawaiian flair to things as well, which I think is extremely exciting. I think both cuisines are very much underrepresented in St. Louis.”

Hardesty says the couple’s "eagerness" stood out to him — reminding the Guerilla Street Food owners of themselves, back in 2011.

“When we created Guerilla Street Food, we were just two friends who wanted to make food that we cared about and we felt could really service the area,” Hardesty says. “At the time, there was no Filipino food being sold. We were very excited when we got started. …That's the vibe I get from Rachel and Arnold. They are putting everything out there to make their dream come true.”

Guerrilla Street Food Is For Sale; Will Close Without a Buyer

Crespo and Hardesty opened the business over a decade ago as a food truck. One of the first in the area, it became widely popular in St. Louis. The business expanded throughout the region, with its first brick-and-mortar building located in Tower Grove in 2015. Over the years, they opened five restaurants, before scaling back to one location in Webster Groves by 2022.

In April, Crespo and Hardesty announced that they would shut down the restaurant and food truck with the hopes of finding a new buyer.

Despite selling the business, Crespo and Hardesty don’t plan to walk away just yet. They will continue to serve as advisors to the Alcantaras during this new chapter of Guerilla Street Food.

“I don’t think it’s bittersweet at all,” Hardesty says. “It’s nothing but sweet. It's pretty awesome to see this happening and to see it continue and to see these people that we trust to carry it on [with] their excitement. I just feel nothing but positivity.”