Gut Check Conjures the Ghosts of Thanksgivings (Far) Past

On November 29, 1900, the Park Avenue Hotel in New York City hosted a Thanksgiving dinner. While Good Housekeeping advised the masses to stick to roast turkey, cranberry sauce, mashed potatoes, tomato soup and pumpkin and mince pies, the menu for the super-rich was quite different.

This trip down memory lane inspired Gut Check to descend into the archives to find out what old-time St. Louisans ate for Thanksgiving dinner. Were their repasts (as newspaper reporters might have said 100 years ago) as elaborate as the dinner that was served at the Park Avenue Hotel?

Turns out the "bill of fare" recommended by the St. Louis Globe-Democrat in 1883 had more in common with Good Housekeeping's menu:

By the following year, however, the Globe had gotten a little fancier. (Still, it was nothing compared to the Park Avenue Hotel.) 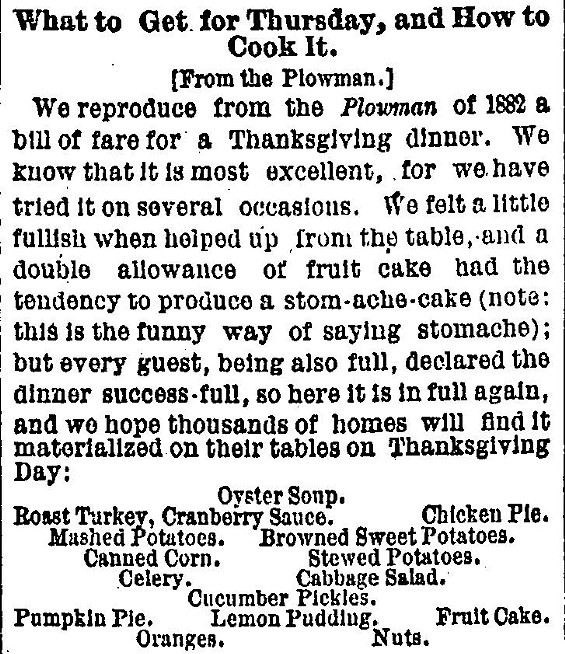 Of course, so much food could be hazardous. A week after Thanksgiving 1885, the Globe reprinted this cautionary tale from the Baltimore American "which might have resulted sorrowfully for all concerned had it not been for their ready presence of mind and prompt action."

A "well-known family of this city" had invited a dozen or so guests to Thanksgiving dinner, which they served on their 40-year-old dining-room table, which had been extended to its maximum length to accommodate all the food. Let the reporter continue the breathless account of what must surely be the most dramatic! Thanksgiving! ever!

The guests were bidden to be seated, the blessing was pronounced, when in an instant there was a creaking sound -- the noise of a general giving away. Horror of horrors! the table was going to pieces in the middle! The scene can better be imagined than described. Fancy the look of consternation upon the faces of those assembled round the festive board with keen and sharpened appetites, ready to do justice to the savory viands, and those very same good things in danger of complete destruction right before their eyes. Think of it -- cranberry sauce about to be emptied into the cold slaw [sic]; the gravy seeking companionship with the butter; turnips desiring more intimate acquaintance with their next-door neighbors -- the potatoes; goblets of water about to be upturned into the salt-cellars -- so things were going pell-mell and beginning to look generally mixed up. Nearly all present screamed, but still managed to hold up their part of the table until rescue came in the shape of side-tables and books, which were utilized as props.

The story gets even more amazing. A son of the family dropped in just as everybody else was finishing eating. Of course they told him the story, and he confessed that at the very moment the table collapsed, he and his wife had been discussing getting the parents a new dining-room table for Christmas.

Moral of this story: Do not even start to think about Christmas shopping until after you've finished Thanksgiving dinner. (Working out a successful Black Friday strategy is so stressful anyway.)

Nothing can top that, except maybe this ad that ran in the Globe-Democrat on Thanksgiving Day 1886:

Recipes for both Thanksgiving dinners after the jump, just in case you want to do your very own Throwback of the House-style extravaganza.