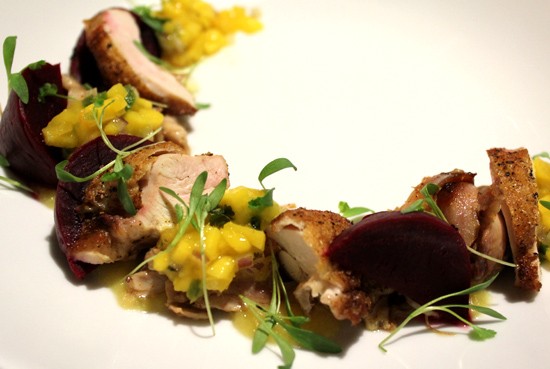 Mabel Suen
A dish at MEDIAnoche, one of 2012's most anticipated restaurants -- and not much longer for this world.

At the end of last year, I listed five restaurants due to open in the coming months that I dubbed the "Most Anticipated Restaurants" of 2012. Now that we've entered the second half of the year, I thought revisiting this list would be appropriate -- if only to highlight how unpredictable the restaurant business can be.

Status: Not yet open.

A year has passed since Gut Check first learned that Pat Shelton was planning to reopen the Lafayette Square home of the St. Louis institution. Recently, however, came the news that Arcelia Sanchez's daughter, Marta Ramirez, plans to open a separate venture, to be called Arcelia's, in Soulard. What will Shelton do with her restaurant? What will she call it if not Arcelia's. I've heard some rumblings, as yet unconfirmed, that make me even more intrigued than I was originally. Stay tuned.

I wasn't quite sure what to make of the news that Mike Randolph planned to open an upscale, progressive Mexican concept in the same space as his successful breakfast spot, Half & Half. When I visited in May, I was impressed. Then, just this week, Randolph announced he would end MEDIAnoche and replace it with Little Country Gentleman, serving tasting menus of Midwestern cuisine. Which is now one of the most anticipated restaurants of the second half of 2012.

Status: Not yet opened.

Gerard Craft's twin bill of opening Pastaria and relocating his flagship restaurant Niche (1831 Sidney Street; 314-773-7755) to Clayton remains one of the -- maybe the -- most anticipated developments in the St. Louis restaurant scene this year.

Chef Brian Hardesty's concept, exploring historical American cuisine, was one of the most intriguing to come along in St. Louis in years. Its location inside the wine shop Starrs has seen more than a few recent concepts come and go over the past few years. The latter trend won out, as owner Bud Starr pulled the plug on Root after only three weeks in one of the year's most confounding stories.