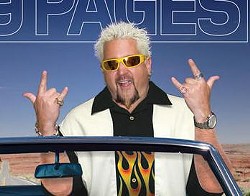 To review: Our sister paper City Pages published a profile of former Diners, Drive-Ins and Dives producer David Page that painted star Guy Fieri in a less than flattering light. Though both Fieri and the Food Network refused comment to writer Gregory Pratt, after the article's publication Fieri's people released a statement slamming the piece.
Now, City Pages has posted a lengthy response, which includes an interview with one of Fieri's reps, a furious response to the article from its ostensible subject, David Page, and detail from a second source of Fieri's apparent discomfort with homosexuals.
Diners, Drive-Ins and Dives field producer Kari Kloster tells City Pages, as part of a longer statement, tells City Pages, "From my memory of being a field producer it's just well-known to me among the crew that Guy has a problem -- if there was a homosexual in a restaurant, as the main character, the shoot went different."
Meanwhile, a Guy Fieri superfan has addressed the subject: Karl Welzein, aka @DadBoner:
click to enlarge