Photo by Sarah Fenske
The Gyro Grill has opened in the old Chubbies location on Delmar.

Gyro Grill opened its doors for the first time this Wednesday, bringing a combination of Middle Eastern food and good old-fashioned American bar-and-grill fare to the Delmar Loop (6227 Delmar Boulevard; 314-899-9437).

The light-filled storefront is the second iteration of the concept for Morad Jaber, who owns the place with his parents. They opened the first Gyro Grill at Kingshighway and Chippewa Street in 2010, before closing it last month in preparation for a move to this space just west of Skinker.

The restaurant was formerly the home of Chubbies.

Photo by Sarah Fenske
Owner Morad Jaber grew up in New York and Milwaukee before moving to St. Louis in 2004.

"The opportunity was here with the space, so we went for it," Jaber says.

The menu is substantially the same as at the old location, he says, with a few additions -- the "Double G" burger now comes with an option for chicken as well as ground beef. So does the shawarma. He's also serving a "Loop Cheese Steak," in honor of Gyro Grill's new address.

The classics, though, are still there -- a variety of gyros, four salads and three rice platters. The basic gyro is just $6; get it with feta and olives for a dollar extra. Or you can try the gyro potato -- a stuffed spud with a topping of feta and tzatziki sauce. There are also, surprisingly, wings. You can get them naked, seasoned, with barbecue sauce, with teriyaki, or with Buffalo sauce.

All the food is halal, meaning it's permissible for Muslims to eat. The meat is butchered according to strict standards.

But you won't see that advertised within the space; there's a friendly, low-key vibe, with counter service and no pretensions. Everything is housemade, which you can taste in the remarkable falafel. It's both deliciously moist and perfectly seasoned.

See also: Chubbies Is Closed for Good This Time 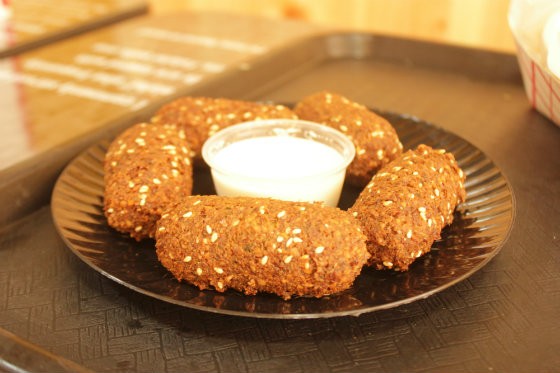 Photo by Sarah Fenske
The falafel is incredibly moist, with a zesty tahini sauce.

Despite the location just blocks from Washington University, Morad sees the place attracting slightly older customers. "Our mix is more adult-oriented and not the college crowd," he says.

So far, the customers have included a lot of older regulars. In the restaurant's first day of business Wednesday, an opening so soft they didn't tie a single balloon outside, "I had 40 people walk in," Morad recalls. "Thirty-six of them were regulars from the old place."

He's jubilant to see so many familiar faces in a new location: "It was the coolest freaking thing. That support is awesome."

Photo by Sarah Fenske
Unusually for many local Middle Eastern places, the shish tawouk comes in a pita pocket, not a wrap.

Indeed, while Morad is chatting with a reporter, one of the regulars from the Kingshighway location stops in to pick up a sizable to-go order -- and laments the fact that the grape leaves will now be served only as a special, not on the regular menu.

"We make everything fresh," Morad explains. "I'll run a special when I have time to make them."

Photo by Sarah Fenske
The space is bright and cheerful.

Jaber grew up in New York and then Milwaukee. He moved here to run a Great Steak and Potato Co. franchise, which later closed. His wife, though, is a St. Louis native.

Together they're raising three kids in west county, or at least that's what he does when he's not minding the cash register. He plans to be here all six days a week that the restaurant is open -- not that he's complaining.

"You do what you have to do," he says. "It's my business and my reputation on the line. There's a lot at stake here. You don't just put that in someone else's hands."