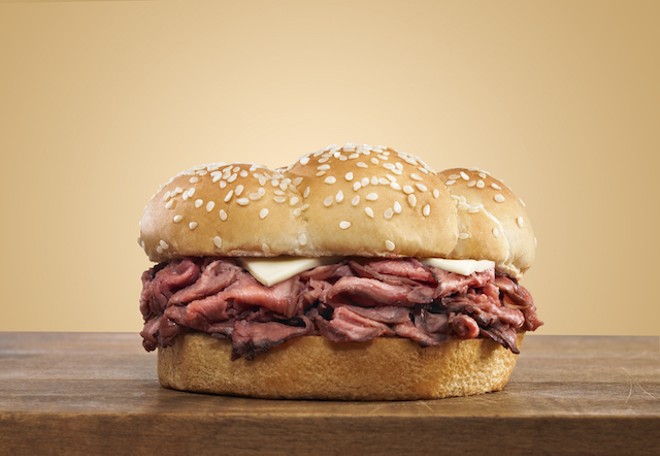 COURTESY OF LION'S CHOICE
Happy birthday to the king of roast beef.

Fifty years ago, as KSHE began filling the airwaves with the sounds of “Sweet Meat,” an even sweeter meat began filling our bellies.

It wasn’t called Lion’s Choice (multiple locations including 14919 Manchester Road, Ballwin; 636-394-8564) when the beloved boutique roast beef chain opened its doors in Ballwin on October 26, 1967. Red Lion Beef was the name given to the place by founders Marv Gibbs and Clint Tobias, who launched their brand with the idea of providing an alternative to the burger-centric fast food spots that had opened in McDonald’s wake. At the time, their roast beef, ham and turkey sandwiches cost just 69 cents each.

According to “LC” lore, Gibbs and Tobias had to change the name two years later; a hotel chain hand already trademarked the brand “Red Lion.” In its place, they settled on Lion’s Choice as a reference to a term from their childhood that meant “the best.”

COURTESY OF LION'S CHOICE
The original.

But we'd argue that the name should be taken literally. When it’s uttered in St. Louis, visions of the restaurant’s mascot — a majestic lion, his mane blowing in the breeze as he looks off into the distance like a wise, battle-tested warrior — immediately pop into the mind. He’s a noble beast, one who doesn’t play when it comes to food, and if he’s going to eat a roast beef sandwich, it’s going to be the most boss roast beef sandwich around.

That lion exists in each and every one of us Lion’s Choice die-hards — and there's a pride that comes with him. Pangs of shame may fill us when we admit to a penchant for Jack in the Box tacos, but there are no apologies for visiting this king of all roast beef. We speak of LC with a religious fervor – and why shouldn’t we? Its 25 restaurants — plus its recently added food truck — serve no mere fast food. Its seasoned beef, roasted medium-rare and shaved to order to the rhythmic sound of the meat-slicer, gives the same satisfaction as the offerings at a high-dollar steakhouse. Top that beauty with extra seasoning and enough horseradish to make your brain burn and it's no wonder Lion’s Choice has achieved cult status.

But more than the beef, it’s the little details that make Lion's Choice such a gem. There are the ice machines for the fountain sodas that give guests the choice of cubed or crushed (is it really a choice? The answer is crushed). The warm au jus dispenser. The oft-mismatched shakers of extra seasoning on the tables. Even mini custard cones for those who need to finish on a sweet note. These little touches add an element of dignity to a restaurant that exists in an industry that’s made its mark in doing the opposite. It’s no wonder that for Halloween this year, James-Beard award-winning chef Gerard Craft is “dressing up” his flagship Sardella as Lion’s Choice for the day. The greats recognize greatness.

“You can’t live in St. Louis and not have a special place in your heart for Lion’s Choice,” Craft said when announcing the Lion’s Choice-themed festivities at Sardella. And he’s right. Though other local foods may steal the spotlight, this magnificent homegrown restaurant is indeed the pride of the town.

Happy 50th, king. You’ve made our choice of roast beef an easy one.