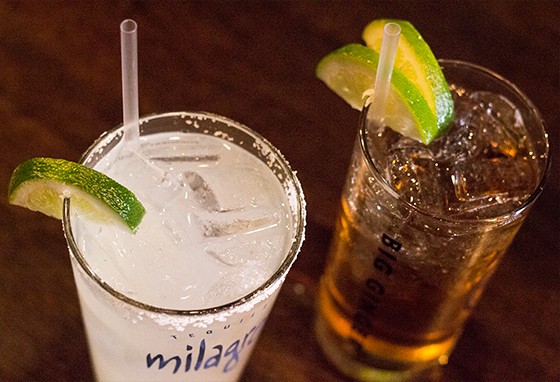 "86db Margarita" and "Big Ginger" cocktails at the Demo. | Photos by Mabel Suen

The Deals: $5 pizzas from Master Pieza. Half-price draft beer and well drinks. $2 off of cocktails on special and cocktails on tap.

Inside the Music Record Shop.

The Scene: The Demo opened its doors in the Grove last year, joined by Music Record Shop -- an independent vinyl, CD and cassette-tape shop -- the following summer. The Demo features a live-music stage with a variety of performances several times a week, as well as a full bar that serves cocktails, draft beer and more.

Located in the Grove.

Once a week, the side-by-side businesses collaborate for a new release happy hour, spinning new cuts accompanied by specials at the bar. During our visit, we caught some new tracks from Calexico and Tyler the Creator. See what new releases and giveaways await each week by following the new release happy hour Facebook page. 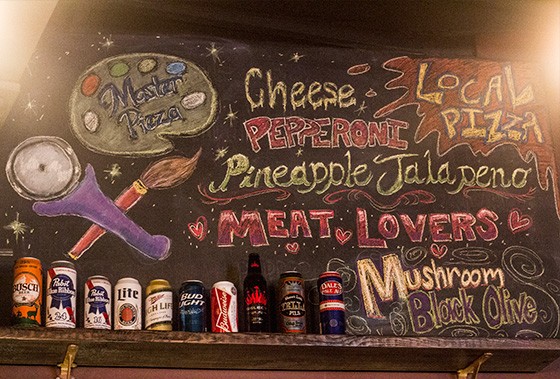 The Food: The Demo has but one food offering, but it's one worth noting. Master Pieza -- named the best thin crust pizza in RFT's best thin-crust pizza in St. Louis 2014 -- whips up a few different kinds of individual pies specifically for the business to serve hungry bargoers. Choose from straightforward go-to options including cheese and pepperoni, or opt for more adventurous combinations: pineapple jalapeno, meat lovers, or mushroom black olive.

Managing partner Brandon Cavanagh behind the bar at the Demo.

In addition to draft beer and well drinks, the Demo features rotating cocktails on tap, plus freshly concocted specials. On-tap options include "the 86db Margarita" with Sauza Blanco tequila, triple sec, fresh lime juice, sugar and club soda, as well as "the Good Neighbor" with New Amsterdam vodka, lemonade, raspberry and strawberry. Set to the soundtrack of new tunes, the partnership between music-loving neighbors proves to be a fine-sounding pairing.