Happy Hour at the Scottish Arms: Walking in a Whiskey Wonderland

Caillin Murray
Outside the Scottish Arms.

The Deal: $2 off drafts on Mondays, $2 off cocktails on Tuesdays, $1 off wine on Wednesdays, discounts on single-malt whiskeys and drams for shot prices on Thursdays.

The Scene: The Scottish Arms is much more than the little neighborhood tavern it appears to be from the outside. It has an unassuming facade, hidden in the trendy Central West End. You'll know it by the large Scottish flag proudly flying above the front door. Upon entering the bar, it's evident that it serves as a solemn homage to owner Alistair Nisbet's native Scotland. The whiskey (or "whisky," as it's spelled in Scotland) selection is out of this world, which the Scottish Arms touts on its website as the largest collection of single malt whiskey in the state of Missouri. The food menu is Scottish to its core, with "Highland Cow Burgers," the "Drunken Lass on the Green Salad" and "Cock-a-Leekie Pie" as possible dinner options. The ambiance of the bar itself is decidedly of the British Isles. Inside it's dark, wooden and leather-bound, with only small wall lamps offering dim assistance to guide you on your drunken way to the bathroom. The bartender was dressed to the nines in a button-up shirt and vest, and was more than helpful with drink recommendations. Gut Check was disappointed we were not referred to as a "wee lass," but we are willing to overlook this letdown when the drinking is this good. 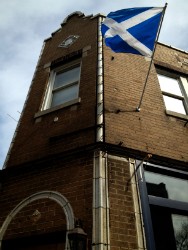 The draft selection has a definite preference towards local breweries, with Civil Life, 4 Hands, Urban Chestnut, Six Row and Schlafly all on tap. The bar also plays host to an array of European brews on draft, with selections from Scotland, Germany, Ireland and the UK. The drink menu is less of a menu, and more of a leather-bound chapter book. There's a legend in the front, instructing patrons which page to turn to for which drink they seek, saving them the trouble of poring over the menu's sixteen pages.

Why You'll Go Back: Perhaps the best part of the bar was the back patio, with seating, tables and bonfires burning late into the night. During the balmy spring and summer nights, the Arms will sometimes set up a projector and show movies in the back yard.

The Verdict: Who doesn't like a good whiskey? The Scottish Arms has such a wide selection of them, they're separated by region, with six from Scotland alone. You can sip on a Cragganmore twelve-year, while munching on the Arms' haggis fritters.