Harold's Shrimp & Chicken Is Coming to Washington Avenue This Fall 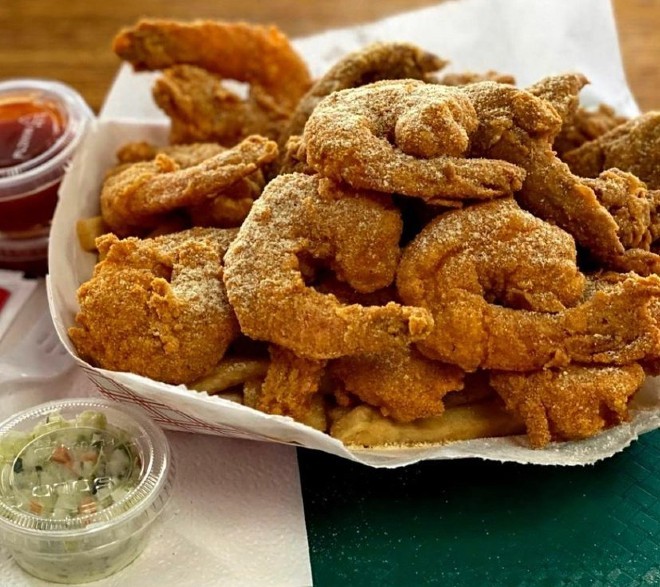 COURTESY HAROLDS SHRIMP & CHICKEN
Harold's Shrimp & Chicken will soon be serving its famous shrimp, chicken and mild sauce to St. Louis diners.
Britt Booker and his business partner, George Anderson, know that their growing chain, Harold's Shrimp & Chicken (1323 Washington Avenue), has good fried chicken, fish and shrimp. They take extra care in selecting the perfect size bird, shellfish and catfish, and they fry everything to order so that it comes to the guest searing hot with ultra-crisp breading and succulent meat. However, if Booker has to name the one thing that gets people going the most at his restaurants, he doesn't hesitate: It's the sauce.

"Harold's has always been famous for its mild sauce, and one of the reasons we wanted to bring this to St. Louis is because no one had mild sauce here," Booker says. "People from Chicago put it all over everything, but if you aren't from Chicago, we tell people to get it on the side and dip so you can taste the chicken first. It's such a distinctive flavor — it's kind of like a cross between ketchup and hot sauce, not at all spicy and not sweet. It's in-between. We have a Harold's Shrimp & Chicken on South Beach, and we've had celebrities come in — 50 Cent, Puffy, all different people — just for the mild sauce."

This fall, St. Louisans will get their first taste when Booker and Anderson open up the first St. Louis location of Harold's Shrimp & Chicken in the Washington Avenue neighborhood. The restaurant will be the fifth store in their growing portfolio, with two additional stores slated to also open soon, both in the Chicagoland area.

According to Booker, Harold's Shrimp & Chicken takes inspiration from a family friend and restaurateur who enjoyed great success in the Chicago restaurant scene. His entrepreneurial spirit inspired Booker and Anderson from a young age; the family friend was often in their company, and they were awestruck by his business acumen and inspired to follow in his footsteps.

After reconnecting in 2019, Booker decided to partner with Anderson, who had founded Harold's Shrimp & Chicken, a restaurant chain that puts its own twist on fried chicken, fish and shrimp. Anderson's restaurants took off in the Chicago area and inspired him to bring the concept to other cities. Once Booker was on board, he decided that St. Louis was a natural market for their growing brand.

"For me, St. Louis is a city of growth — it's not a real big city, but it's not real small," Booker says. "The fact that there wasn't one here made it seem like we should bring one because you have SLU and SIUE and Harris Stowe and a lot of people who go back and forth between St. Louis and Chicago. I thought it would be great to bring it here and make it more of a sports bar downtown, because we are close to Ballpark Village and the hockey arena and the new soccer stadium."

Booker says Harold's Shrimp & Fish will be much different from the average sports bar because of the quality of the food. Unlike typical frozen bar food offerings, their food is fresh and cooked to order. In addition to the chicken, fish and shrimp, he plans on offering everything from gizzards and pizza puffs to pizza. Though the restaurant will be counter service, it will have a full bar and a welcoming environment that encourages people to stay for special events like Monday Night Football night, karaoke and live music.

Still, if he thinks there is one reason people will be coming back — besides the mild sauce — it's because the food will be outrageously good.

"What makes us different from other fried chicken places is that the food will never be sitting under a light," Booker says. "There's nothing better than fresh food. You order it and we cook it. That's the only way to do it."