The local brands are encouraging people to think beyond Dry January 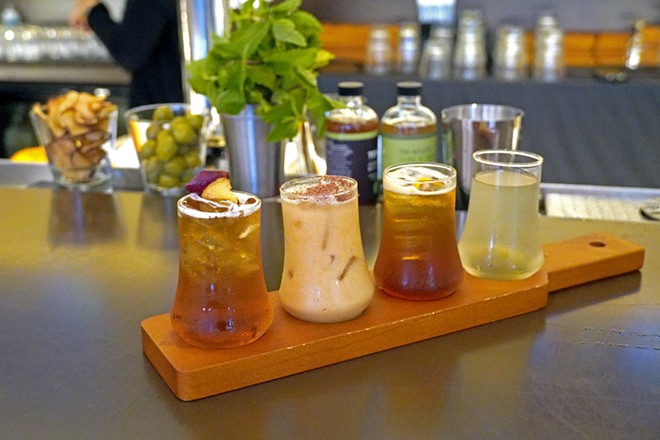 Two leaders of St. Louis' alcohol-free movement are partnering up for a zero-proof cocktail series meant to show drinkers and non-drinkers alike there is more to the movement than Dry January. Hello Juice and Sans Bar will be launching their "AF Happy Hour" this Thursday, January 12, at Hello Juice's Kirkwood location (10463 Manchester Road, Suite F, Kirkwood; 314-394-0236), promising an evening of merriment, activities, socializing, delicious food and creative cocktails — minus the booze.

"Dry January has gained so much momentum, and I love it," says Annie O'Donoghue, Sans Bar's self-styled mastermind. "But then February comes around, and they say to themselves, 'What now?' I'm not sure if it's because of habit of what, but people go back to what they were doing, so this is a continuation of that momentum that lets people know they don't have to go back, or if they want to, maybe they can do so in a more mindful way."

As O'Donoghue explains, the collaboration between the two brands was a natural one, borne of a longstanding relationship with Hello Juice co-owner Jen Maness. Both alcohol free in their late teens and early twenties, the two forged a friendship that has spanned moves across country, lifestyle changes surrounding alcohol and new business ventures. Both proponents of the alcohol-free and mindful-drinking movements, the two (together with Maness' husband and Hello Juice co-owner Joe) are excited to partner up in a way that shows the community a world of possibilities that exists beyond alcohol consumption.

"I like calling it a movement because I really hope it is not just a moment," O'Donoghue says. "One of problems I've experienced has been that I am nondrinker, but all my friends were drinkers. I never felt like I belonged and was so self conscious being the one drinking a club soda and cranberry juice. What's great about this is that is shows people you don't have to have problem to stop drinking or take the night off. With all of the products available, you are just one amongst many. People want to feel normal, and the response has just been amazing." 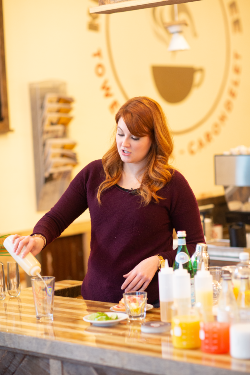 O'Donoghue is well-positioned to help spearhead this movement. Later in her teens, she made the decision to quit drinking alcohol only to start again when she was 25 years old. At that time, she was living in New York City and working as a bartender; drinking was simply part of that culture, so she joined in with her peers, only to understand that there was a reason she'd made the decision to become alcohol-free in the past.

"It was five years of misery and craziness," O'Donoghue says.

She knew she needed to make a change, so she got involved with the nonprofit NCADA, or the National Council on Alcoholism, which eventually led to a relationship with the Texas-based organization Sans Bar, a foundational voice in the national dry movement since 2017. When she moved back to St. Louis from New York in 2019, O'Donoghue launched the St. Louis chapter of Sans Bar with an initial event at Third Degree Glass Factory. It was a roaring success that showed her there was a real thirst for alcohol-free social opportunities in her hometown.

Since that initial launch, O'Donoghue has hosted several Sans Bar STL events throughout the area, such as get-togethers at Kingside Diner and the now-shuttered Great American Human Foosball, as well as parties at the Improv Shop. She's excited to carry this momentum forward into this current series with Hello Juice —  which runs January 12 and 26 and February 9 and 23 — and is confident that people will be excited with what they have put together. For $30, the evening will include all-you-can-drink zero proof cocktails, snacks and all materials needed for the interactive events, such as DIY succulent planting, a lineup of festivities which she hopes will draw even more people into the movement, even if just for the night.

"People come out for all sorts of reasons, and that's the most interesting thing about it," O'Donoghue says. "At the first event, a woman came up and told me she was 100 days sober that day. Another told me that she doesn't drink because she had a lung transplant. We are so put into boxes, and I just want to bring people together and have fun."