Hello Juice Is Redefining Healthy Eating, One Smoothie at a Time 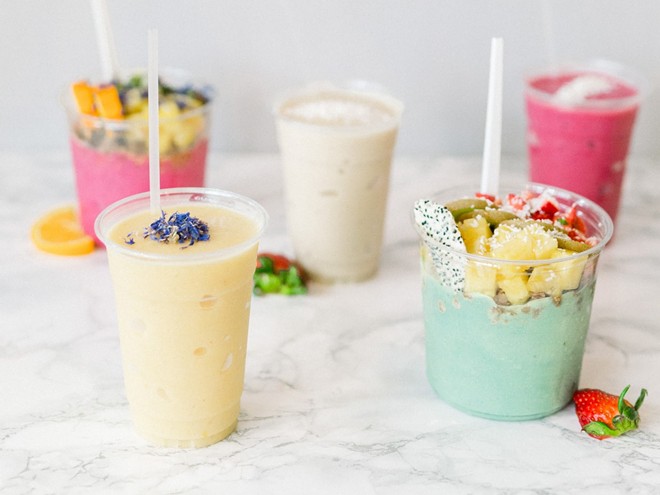 Jon Maness admits he was an unlikely proselytizer of the benefits of juicing — all he needs to do is point to his initial chat with his wife, Jen, about getting involved with Hello Juice & Smoothie (multiple locations including 1000 South Newstead Avenue, 314-376-4135) to drive that point home.

"When we had our initial conversation about it, I was sitting outside smoking a cigarette, and Jen comes out and says, 'Hey, we need to meet with these people about buying a juice bar,' " Jon recalls. "I said, 'Are you fucking crazy? What do we know about juice?' But it was immediately evident walking in and seeing the product being made that this was something important. I started coming in, learning all of their processes, and I went from doing it to support Jen to falling in love with it. It changed my life dramatically."

Since getting involved with Hello Juice just a few months after its founding in 2018, the Manesses have been on a mission to make their cold pressed juices, smoothies, smoothie bowls and breakfast fare accessible to people from all walks of life, not just health food enthusiasts. For Jon in particular, this business model personally resonates because of his own health struggles. After years of hard living, Jon found himself critically ill, literally dying of liver failure, and needing to make a serious lifestyle change if he wanted to make it.

"My doctors gave me a week to live. I didn't have a choice but to change," Jon says.

That was 2012, and Jon has been sober ever since — one of the many things that connected him and Jen when they met a year later (Jen has been sober since her early 20s). The pair also bonded over their entrepreneurial spirits, and got into the home remodeling and real estate business shortly after getting together. They had a successful run, and Jen even owned a brokerage firm for two years. However, her insatiable drive to find new business ventures steered them into a direction they did not see coming. 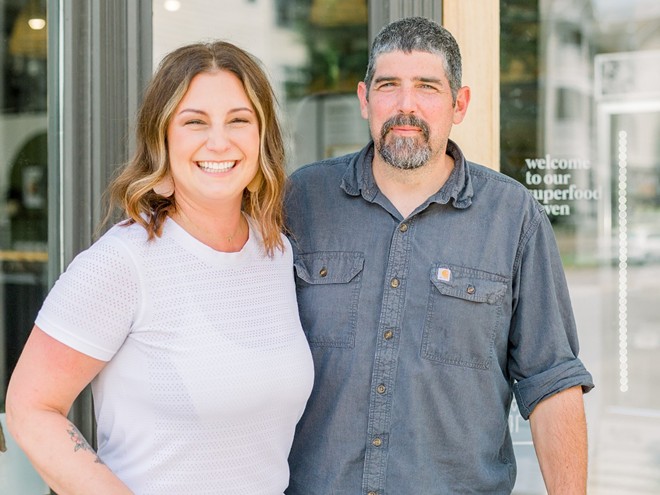 "I'm always coming up with these crazy business ideas, and Jon is the grounding one who tells me when something probably isn't a good idea," Jen says. "But I heard about Hello Juice and met [co-founder] Jordan [Bauer] the weekend they opened in August of 2018. At that time, I was thinking about doing a bar or something, but fast-forward a few months and Jordan and his wife Kayla were interested in having us on as partners."

As Jen and Jon explain, they were excited to partner with Hello Juice founders Jordan and Kayla Bauer because they were impressed by both their product and their creativity. Though there were other smoothie and juice brands on the market, Hello Juice felt different because of its commitment to using only fresh ingredients, rather than the pre-made mixes and purees used by national chains. When they came on as partners, Jen and Jon quickly realized just how labor intensive this way of doing things was and eagerly committed to learning everything they could about making the best possible juices and smoothies they could offer.

This experience paid off when Jen and Jon bought out the Bauers in 2019 and became sole owners of Hello Juice. Since then, they have thrown themselves wholeheartedly into creating a bright, welcoming environment that appeals to everyone, not just those who already lead a healthful lifestyle.

"We don't want to sell health food to people who are already buying health food," Jon says. "For me, this is for everybody — construction workers like me who have never had a vegetable in their lives, little kids, everyone. We don't want this to be pretentious. This is for everybody, not just those living a crazy healthy lifestyle. They already know about us; we want to figure out how to reach others."

In addition to their first location in the Grove, the Manesses opened a second spot in Kirkwood this spring and are seeing where things go from there. Though they do not see themselves expanding nationally, they would like to eventually have four or five Hello Juice stores in the St. Louis area so they can reach even more people and dispel the myth that you have to be a certain type of person to enjoy their brand.

"I have kind of reinvented myself and who I am and what I am about as the years go by," Jon says. "I just found that when I would come into Hello [Juice} and it was just so bright — between the food and the employees the space. I know this sounds cheesy, but I’d be lifted up by being there. Life is short; why wouldn’t I want to live in this? It's not about us making money. It's a lifestyle."