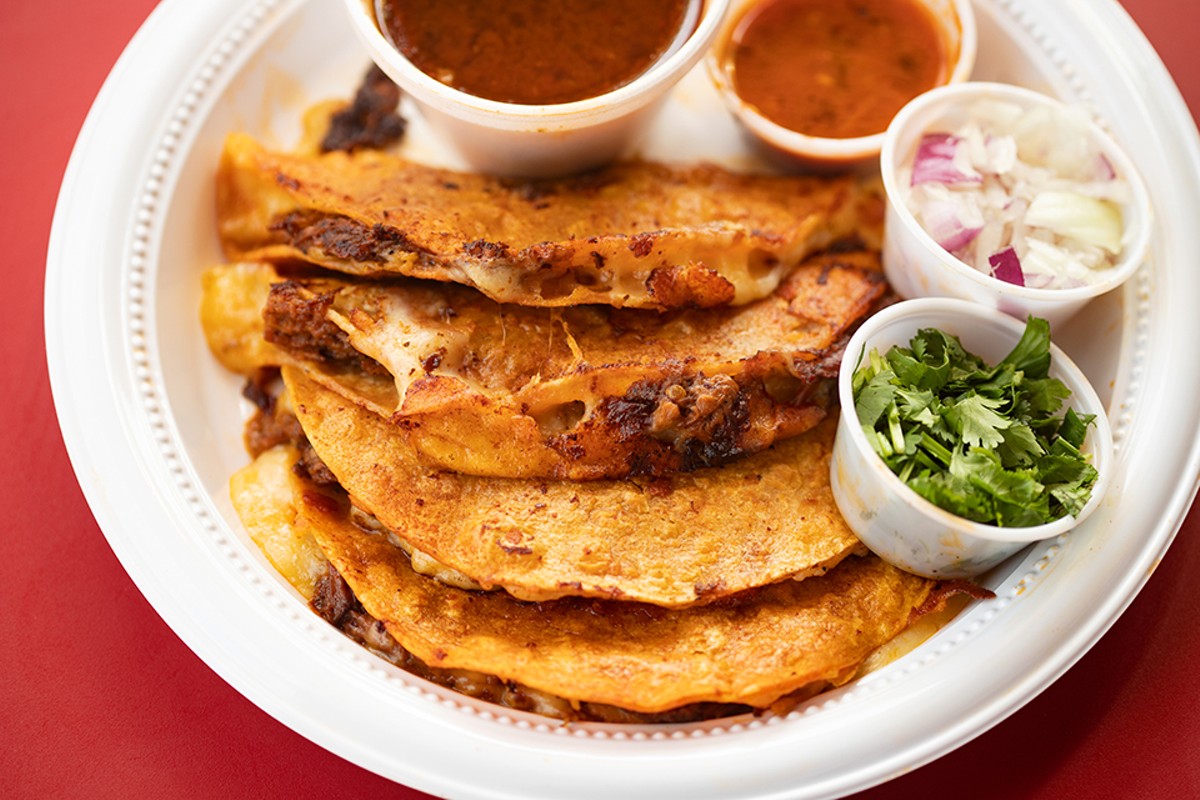 Heriberta Amescua would always laugh when people called the dipping liquid that comes with her quesabirria a sauce. "It's not sauce; it's broth," she'd correct them, sometimes instructing her customers to put some rice, cilantro and onions in the Styrofoam cup that contains the glorious, beefy nectar and drink it like a soothing, savory beverage. It wasn't just culinary semantics that prompted the correction. She didn't care that people got the name right so much as she wanted to share her Mexican culture with those who ate her food. It's what prompted her to start selling birria nearly two decades ago, and it's what animated her decision to open her birria shop, Tacos La Jefa, this past September.

Amescua had always dreamed of opening a restaurant for her birria. Her whole life was food, and it seemed like there was never a moment when she was not in her kitchen cooking up the recipes that had been passed down to her from generations of women in her family. She carried on this tradition, instructing her children and grandchildren — including her especially interested granddaughter, Diana Guzman — on the art of making birria, and allowing them to be by her side as she toiled away both preparing and serving her food to anyone lucky enough to get a taste.

Though she didn't have a brick-and-mortar spot until late last year, Amescua amassed quite a following over the eighteen years since she began sharing her gift with the world. At first, she cooked for Mexican festivals around town, and eventually expanded her operation to regular cookouts in her backyard that she advertised by word of mouth. As more and more people outside of Amescua's inner circle began to learn about her birria, her reputation grew into the stuff of culinary lore, with people lining up in her backyard and around her house to get a taste of her food.

In July 2020, her reputation grew even more thanks to a robust social media presence developed by her tech-savvy family members. Though the COVID-19 pandemic had put a damper on her backyard operation, Amescua continued to cook for people, giving away plates of food to anyone in need. Around that time, she caught the eye of the people behind the Dutchtown food hall and commissary Urban Eats, who asked her to become a part of their facility. For Amescua, it was the chance she'd been waiting for her entire life — finally, her longtime dream of opening a restaurant was coming true. 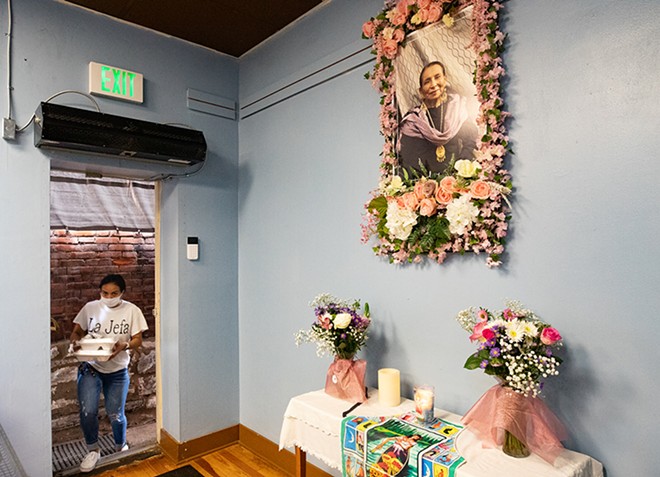 Sadly, her joy would be short-lived. A hearty spirit whose family describes her as a warrior, Amescua had been battling health issues for some time and had been in and out of the hospital about every two months for a year. Still, she refused to give up on her restaurant, and drew strength from the joy she'd see on people's faces when they ate her food, even rallying for Tacos La Jefa's Urban Eats grand opening after having heart surgery only a month prior.

For seven months she lived the dream, until her health took a turn for the worse. On April 18, at the young age of 69, Amescua passed away peacefully, expressing one wish to her family: Please keep the restaurant going.

As painful as her passing was, Amescua's family had clarity in their grief. Because her last wish was that they continue Tacos La Jefa and keep her legacy alive, they knew they had to honor her request, no matter how painful it might be. As Guzman recalls, the first day the restaurant reopened after her passing was incredibly difficult, because everything reminded the family of her. Her absence was palpable, but they kept smiling through it because they knew it was what she wanted. 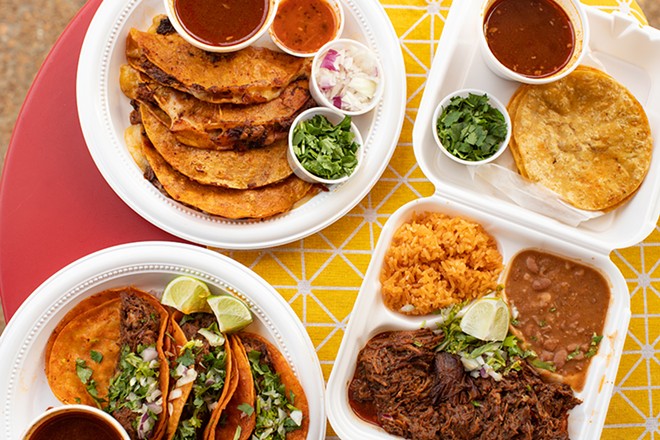 Through her birria recipe, Amescua's family is able to feel a closeness to her, even though she is no longer the one tending to the large pots in the kitchen. For those who had the privilege of eating her food, the fact that they are following her every last instruction to execute it just right offers a beautiful continuity and connection to her version of the dish; for those of us who were not so lucky, it offers an intimate glimpse into her family traditions and cultural heritage, which is why she wanted to cook it in the first place. You don't have to have met her to understand why she was so special. One bite of the luscious, slow-cooked meat, dripping with its own chili-infused juices, makes you understand why she was La Jefa.

Though birria has become one of those food trends that non-Hispanic people have "discovered" over the past few years, its tradition stretches too far back in Mexico's culinary history to recount; Amescua herself was cooking it in St. Louis for nearly twenty years. Yet despite its complicated shot to the top of "best food" roundups, it's understandable why such an incredible treasure has captured the attention of anyone who has had a taste. The beef (likely chuck or another similar stew meat, but Amescua's family will not disclose her secrets) is cooked for roughly ten hours with ancho and guajillo chiles, onions and other spices. The result is the most flavorful pot roast you've ever had, served with vibrant red-orange chili-soaked tortillas, chopped white onions, cilantro and hot sauce so that you can make your own tacos — if you can stop yourself from just palming heaps of the succulent meat into your mouth as you try to stuff it into the tortilla. 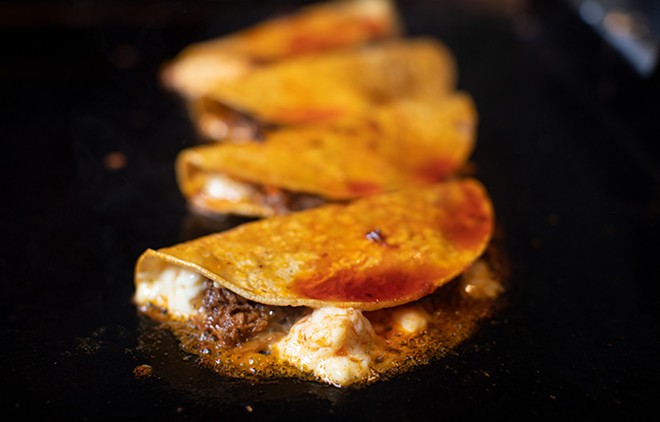 MABEL SUEN
Quesabirrias on the grill.

The birria itself is positively majestic, but the reason Tacos La Jefa has caught fire is because of its quesabirria, a glorious concoction that's like a cross between pot roast, a cheese quesadilla and a French dip. Amescua's birria is placed on an open-face cheese-topped tortilla and griddled, then folded in half. The taco is then dipped in the birria's cooking liquid and griddled again so it crisps up; this has the effect of marrying the molten cheese-encrusted edges with the beefy particles in the liquid. It's outrageously good, but the pièce de résistance is the cup of the cooking jus that comes alongside the quesabirria. Guests are encouraged to dunk the beefy-cheese wonder in the savory broth and enjoy how it soaks into every crevice. This is a juice-up-to-your-elbows sort of endeavor, and there's no way you will avoid getting messy (don't wear a white silk blouse as I foolishly did), but even if you do, you will wear that jus as a badge of honor.

Tacos La Jefa serves nothing but the birria tacos and quesabirria. It doesn't have to. There is nothing more you could want from such a magical place. That Amescua's family has been able to work through their grief and keep it going so that we can experience it makes dining at Tacos La Jefa an absolute honor. If you ask them, though, they say the honor is theirs.

"To us, she was a warrior," say her kids Carmen, Ricardo, Andrea, Ernesto, Elizabeth, Heriberto, Liliana and Marth. "She showed us to never give up and that it's never too late to follow your dreams. We will keep her dream alive, and we will live one day at a time. We love you and miss you, mother." 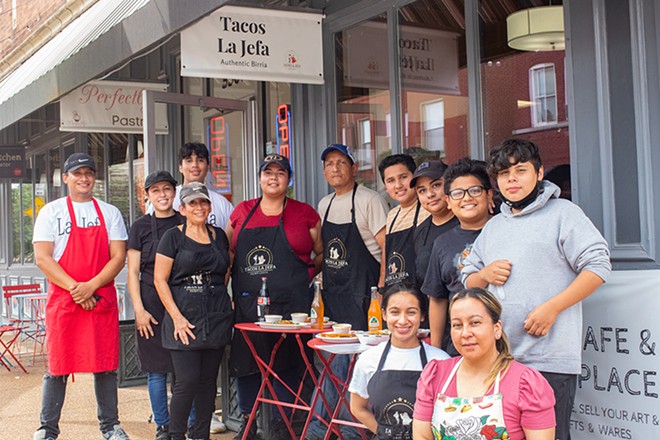