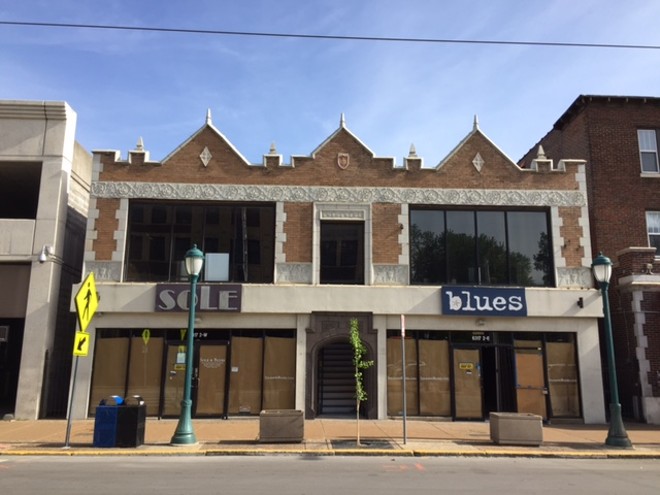 PHOTO BY SARAH FENSKE
HopCat, the Michigan-based craft beer-focused concept that's taken the Midwest by storm, plans to open in the Delmar Loop later this year — bringing 80 taps and seating for 345 people, including a large beer garden.

Construction on the site, at 6317 Delmar Boulevard, is already underway. The sizable double storefront was previously home to Sole and Blues, twin clothing and footwear concepts that headed to a smaller spot on the west end of the Loop earlier this year.

In a press release this morning, HopCat said it would be investing $2.5 million in the project, including extensive renovations to create a large beer garden in the rear of the space. That outdoor area alone is expected to seat 100 guests; a smaller area out front will also include sidewalk seating.

The first HopCat opened in 2008 in Grand Rapids and has since spread to fourteen cities. While many of them are in Michigan, a Kansas City location opened in the Westport area earlier this year. Other locations are in Chicago, Indianapolis and Lexington, Kentucky.

“St. Louis has played a major role in America’s brewing heritage, so creating a HopCat in one of America’s great beer cities seemed like a natural fit,” said Mark Sellers, founder of HopCat and its parent company, BarFly Ventures, in a prepared statement. “The Delmar Loop area is just the kind of location we look for when choosing a HopCat. With easy access to amenities like the Loop Trolley, proximity to live music venues, other great restaurants and bars, and the historic Theatre Tivoli, we think HopCat can further strengthen this unique neighborhood.”

HopCat serves a full food menu, which includes burgers, Detroit-style pizza, mac and cheese, and its signature "Crack Fries" (named among the top ten in the U.S. by Food Network Magazine).

The company said it would be hiring hourly employees by late summer. It expects to hire a team of 130 people. Email [email protected] for more info.