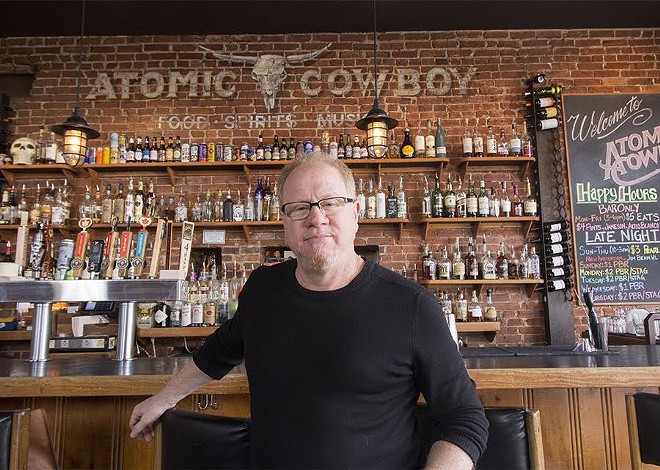 Mabel Suen
Atomic Cowboy's Chip Schloss is an accidental restaurateur.
If everything had worked out according to plan, Chip Schloss would never have opened Atomic Cowboy (4140 Manchester Avenue, 314-775-0775). "When I bought this building in the Grove twelve years ago, I thought the neighborhood looked like it could become the next Loop," Schloss recalls. "Unfortunately, nobody else believed that. I had a vision for a restaurant in the downstairs storefront of the building I'd bought, but I couldn't get anyone to occupy it. So I said, 'Screw it, we'll do it ourselves.' Everybody thought I was nuts."

A business developer for Sony by day, Schloss had found himself in the Grove when the Washington Avenue loft where he was leasing office space was bought by a redeveloper. He was given a choice: Purchase the 900-square-foot space for an astronomical price or buy elsewhere. "They were asking five times the price I paid for this entire building in the Grove," says Schloss. "So I opened our offices on the second floor and looked for a tenant for the first floor."

Twelve years ago, the Grove was not the hotspot that it is today. Though the neighborhood was anchored by a few iconic bars (Novak's, Attitudes), storefronts stood vacant and real estate was cheap. Schloss saw the opportunity. "It looked exactly like the Loop. It was about the same size between Vandeventer and Kingshighway as the Loop is between Skinker and Trinity," he explains. "The buildings were designed the same, to be residential on the top and retail storefronts on the bottom. I thought that if we could get a restaurant in here, it could be like the Blueberry Hill of the Grove."

Schloss didn't have experience in the restaurant business, but he drew upon his time spent in Southern California and Mexico's Baja California region for the Atomic Cowboy concept. "I always say that the way it looks out back, with the open walls and the rustic feel, that all we need is an ocean down the block and it would be Baja," Schloss laughs.

To bring people to the neighborhood, Schloss knew that he would have to make the place not just a restaurant, but an entertainment destination as well. He also consciously cultivated a well-worn aesthetic to give Atomic Cowboy the feel of an institution, even from its inception. "It became a joke about how much knotty pine I'd use," Schloss laughs.

These days, Schloss' vision for the Grove has come to fruition, and even as the neighborhood grows, Atomic Cowboy has too. Bartending legend Tony Saputo now heads the bar, the restaurant has a new events space, and chef Stephan Ledbetter (formerly of Central Table Food Hall) has created a new, barbecue-focused menu to compete with the many food options now available up and down the street.

Still, Schloss can't help but maintain that irreverent spirit that made Atomic Cowboy into the mainstay it is today. "I'm not a restaurateur, I'm a ringmaster," he says. "We're in the circus business here. If people walk out of the doors, shake their heads and ask what just happened, then I know they are likely to come back."

Schloss took a break from his three-ring show to share his thoughts on the St. Louis food and beverage scene, why St. Louis needs to connect to its river roots and the last thing he'd like to taste before the shaman rips out his heart.

What is one thing people don’t know about you that you wish they did?
That I believe people are not measured by their mistakes but how they resolve them, and I hope to receive the same sentiment in kind, because mistakes…I’ve made a few.

What daily ritual is non-negotiable for you?
Music. I listen to music on my drive time to work — not the radio. I stream music apps. I search up whatever comes to mind and crank it through my car's audio system. There's always a cup of coffee en route as well. It's not a long drive, not nearly long enough, but it's enough. I’m used to expecting the unexpected when it comes to whatever the day is gonna throw at me, so music helps me cross that bridge as I head into the unknown. Sometimes I get lucky and hit some long slow traffic.

If you could have any superpower, what would it be?
For the greater good, the ability to instantly fix stupid. So many problems have obvious common sense solutions to me. For my own personal good, time travel. I’d love to dine with the Mayans, the Egyptians, the ancient Greeks.

What is the most positive thing in food, wine or cocktails that you’ve noticed in St. Louis over the past year?
St. Louis beer culture is in full-tilt renaissance mode and we are very busy engaging that at Atomic Cowboy. The world-class brewers and brewery startups are a catalyst for our city in so many ways, right down to playing a role in the revitalization of our neighborhoods where people go to dine and drink their products.

What is something missing in the local food, wine or cocktail scene that you’d like to see?
A connection to the Mississippi. I am a fan of “Chouteau’s Landing,” the landing on the south side of the arch. I’d like to see something authentic in one of those historic buildings that takes us back to St. Louis roots — a big bawdy restaurant like Tony Faust’s overlooking the river.

Who is your St. Louis food crush?
Danny Meyer. He’s turned his childhood impressions of St. Louis food culture into an empire. Barbecue, the Hill, Alan’s Delicatessen, Steak & Shake — it's all playing out in NYC.

Who’s the one person to watch right now in the St. Louis dining scene?
Chef Liz Schuester. She’s cooked her way around the world for sheiks and rap stars, grew up in a German-speaking southside bakery, has an MBA and is a licensed bow hunter and a former Arch Rival Roller Girl. She's got these formally trained global culinary chops, is smart as a whip, tough as nails, and can wow an audience all while keeping her head on straight. Were preparing to launch a very eclectic Firecracker Pizza & Beer together in the Grove this year, and all those characteristics will come into play.

Which ingredient is most representative of your personality?
A cast-iron skillet. I’m seasoned, I can take the heat, and you never want to let me go.

If you weren’t working in the restaurant business, what would you be doing?
Making music and hanging out with my musician friends. I’d set up a rehearsal studio in my living room and keep lots of food and drink on hand and invite all sorts of other good people.

Name an ingredient never allowed in your kitchen.
Well, I wish it was alcohol. It's so hard to babysit. I've seen too many talented people become unworkable due to their proclivities when they don't separate what they do outside the kitchen from what they do inside.

What is your after-work hangout?
My work with Atomic Cowboy is already a circus of entertainment, events, festivals and concerts of every kind. It's always on, so I don't really have to get out much. I am lucky to have this amazing woman in my life, and we are soon going to take a week in Tulum, Mexico, at an off-the-grid catered group of beach bungalows. I have a feeling that’s gonna be my new favorite after-work hangout.

What would be your last meal on earth?
I’d like to have some tamales at Chichen Itza right before the shaman rips out my heart.