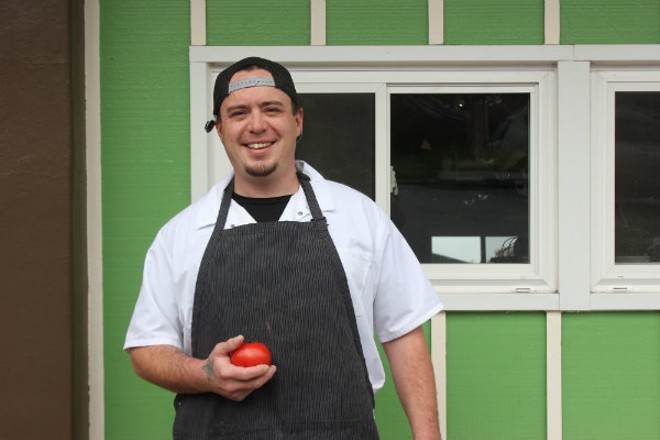 Cheryl Baehr
Kounter Kulture's Michael Miller.
In Michael Miller's self-described "super-Italian" family, it was the men who did the cooking. "My dad, even though he was a busy entrepreneur, always had a home-cooked meal on the table for us, and some of my earliest memories are the smells and sounds of my maternal grandfather's kitchen," the chef and co-owner of Kounter Kulture (3825 Watson Road; 314-781-4344) recalls. "At the time, I didn't know it was having such an impact on me, but looking back it was a big influence."

Like the other men in his family, Miller loved cooking. However, he didn't see himself as particularly talented until he noticed how friends turned to him for help at backyard barbecues. "Growing up in the Midwest, barbecue was ingrained in us," Miller says. "We'd spend our time just hanging out in people's backyards grilling brats and pork steaks. Eventually, I noticed I was always the one on the grill because I was the least likely one to burn everything."

Miller used his grilling prowess at his first job — working as a short-order cook at the Des Peres institution the Village Bar. Though the food was simple, he learned the ins and outs of cooking on a line, and got a feel for the industry. Still, he didn't see cooking as a career; instead he went to Florida for college and prepared for a career in finance.

When his then-girlfriend got pregnant with their son, Miller moved back to St. Louis to focus on making money to support his family. He got a gig at the west county Tucker's and began to embrace the idea of a career in the kitchen. However, his real passion developed on a trip to San Francisco. "It was like the sheets were completely pulled away from my eyes," Miller says. "I saw just how amazing a career could be with all of those restaurants out there. Rather than just making money, I realized this is where I could get serious."

Miller moved to San Francisco with a plan to go to culinary school, but his chef mentors insisted that he could get just as valuable an education outside of the classroom. He worked hard, learned new skills and, instead of spending money on tuition, went out to eat.

"That's where my love of Asian cuisine really developed," Miller explains. "I'd go out to all of the hole-in-the-wall restaurants around Chinatown and really spoil myself. I picked up so much and was really drawn to the complexity of flavors."

Miller returned to St. Louis and took a job under Josh Galliano at the famed Monarch. His tenure at the restaurant helped him hone his culinary craft, but it also led to a business partnership with co-worker Christine Meyer. The pair came up with the idea to sell chef-oriented t-shirts under the name Kitchen Kulture, and they approached the people in charge of the Tower Grove farmers market about setting up a booth. The organizers were intrigued, but they wanted the pair to sell food items as well. To the pair's surprise, their prepared foods offerings sold better than the shirts.

Indeed, Miller and Meyer's fiercely local, Asian-inflected food gave them quite a following — so much, in fact, that they decided to open a permanent, brick and mortar operation in Lindenwood Park.

At Kounter Kulture, they are serving up their eclectic mix of Asian fare out of a tiny storefront in south city's Lindenwood Park neighborhood. It's a far cry from the t-shirt company he originally envisioned, but Miller is right at home. "This is the food I enjoy eating — when I go out, this is where I gravitate," says Miller. "Plus, on a food-consciousness level, this type of food is not so meat and protein-focused. It allows us to have a lower carbon footprint, which is very important to us."

Miller took a break from Kounter Kulture to share his thoughts on the St. Louis food and beverage community, why you'll never see lupini beans in his kitchen and his surefire remedy for winding down after a long day.

What is one thing people don’t know about you that you wish they did?
I am a father. My son Jaden will be fourteen in January.

What daily ritual is non-negotiable for you?
A hike and coffee. It helps clear the mind and mentally prepare me for the day.

If you could have any superpower, what would it be?
Time travel. Just think of the possibilities. No regrets and no mistakes!

What is the most positive thing in food, wine or cocktails that you’ve noticed in St. Louis over the past year?
The wave of young chefs opening restaurants and breathing new ideas into the food scene.

What is something missing in the St. Louis dining scene that you’d like to see?
Authentic Japanese shabu-shabu.

Who is your St. Louis food crush?
Eric Heath of Cleveland-Heath. My man is killing it.

Who’s the one person to watch right now in the St. Louis dining scene?
I'm looking forward to Matt McGuire's new spot [Louie's, opening in the former Jimmy's on the Park].

Which ingredient is most representative of your personality?
Fish sauce — salty and smelly, but with deep complexity.

If you weren’t working in the restaurant business, what would you be doing?
I have no clue honestly. This is all I know.

Name an ingredient never allowed in your kitchen.
Lupini beans. They are just gross.

What is your after work hangout?
Stella Blues. Kimchi pizza and Hibiki whisky are exceptional aids in unwinding after a long day.

What’s your food or beverage guilty pleasure?
Sour candy. I have an insatiable sweet tooth.

What would be your last meal on earth?
A full spread of Korean BBQ with all the kimchi and banchan.